You can tell where they've been, because it's on fire!

Wyldfire is about the closest our campaign gets to the X-Men or Sky High, but it’s really closer to the Astro City Irregulars crossed with your typical hour-long adventure drama on television, such as Counterstrike from USA or Leverage from TNT.

But, hopefully, without the massive crime on the part of the heroes!

Adventurers in this team are at least old enough to drive, and preferably have reached the age of majority. They work at Dr. Gironde’s pet project, the "Gironde School for Gifted and Special Needs Students" (usually shortened to "the Gironde School"), where many of the students are mutants or the survivors of mad science — and, almost invariably, so are the adults. Some of Wyldfire are teachers, some are school staff, some work for other parts of Professor Gironde’s family holdings, a few work specifically in the dormitory where the students reside, and one former member was head of site security for the school and Dr. Gironde’s nearby home.

These heroes work the hardest to conceal not only their secret identity, but even the zip code of their home base. They have families and friends (who wouldn’t be helpless in a surprise fight, but what rational adult wants the risk of children winding up in real combat?)

Their adventures tend to be assigned missions by their employer/benefactor, to go solve a specific problem or prevent a potential trouble. They have some idea of preserving admissible evidence where the cops will legally acquire it, though that’s a skillset they still need to develop. The mission may require them to stop industrial espionage, catch a mad inventor’s destructive toys, rescue a hostage from Cobra Commander, or deal with terrorist interference at a S.T.A.R. Labs experiment. Enemies are generally either superpowered, or wielding unpleasantly experimental gadgets.

Sponsor (Dr. Jean-Claude Gironde, also referred to as "Boss" when referenced out in the field so we don't slip and use any identifying names)

Wyldfire is a counter-espionage covert supergroup, originally formed to handle extralegal problems that cannot be solved by the relevant government. When Transcorp1 fronts for Revelations Inc in the sale of illicit genetic test data, or the Orion Club suddenly starts renting every hunting lodge in the Adirondacks during the off-season, Wyldfire are the supergroup who will poke around to find out what's really going on.

1 We absolutely under no circumstances mean the real-world company named "Transcorp", more formally known as "Transnational Corporation of Nigeria". They did not exist when we started this campaign. We wish them well. No, we borrowed liberally from Marvel Comics and the original Shadowrun sourcebooks published by FASA back in the 1990s. In our campaign, Transcorp is a shell-company-for-hire: they help business entities hide the legal trail of assets. They might unknowingly work for LexCorp or Ares Macrotech or Von Doom Industries. Of course, they also might unknowingly work for Batman. They don't WANT to know who they are really working for, they just want to take advantage of reporting loopholes and tax evasion systems, and get paid.

To Free the Oppressed 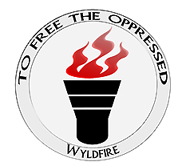 Formerly a villain's designer minion, this compact metahuman leopard-human hybrid is now a spouse, mother, and Field Leader for Wyldfire

Gadgeteer and computer systems expert for the Wyldfire team.

A Kryptonian scientist from the city of Kandor on New Krypton. She is a multi-disciplined scientist with a focus in nano-cybernetics, bio-genetics, and quantum computing.

Tales of Justice is a work of pure, unabashed fiction. In fact, it considers itself rather heroic and quite proud of itself. Names of characters, places, events, organizations and locations are all creations of the author’s imagination for this fictitious setting.   Any resemblance to persons living, dead, or reanimated is coincidental. The opinions expressed are those of the characters and should not be confused with either of the authors, since the characters and authors tend to disagree a lot.   Unless otherwise stated, all artwork and content are © CB Ash and Jarissa Venters, 1993-2022, All Rights Reserved.
Original CSS "Comic" theme comes from Oneriwien but has been adapted/modified and expanded by Kummer Wolfe
Article template
Organization
World
Tales of Justice
campaigns
AIMing to Misbehave
Specter of Peace