Welcome to Murder World, where the secrets are plenty, alliances are fleeting, and the key to victory might be rewriting the rules of the game. Who will survive?

At the opening of this session:


Let the party fiddle around for a while. I'm sure everyone has plans for how they're going to deal with this situation. Right?
Clouds sit low in the area right now. The sunny gap around the protagonists is decreasing as a raincloud trudges in from the north-northwest.

Jaqstones is unhappy because there is something very wrong with the ground. No, she can't get specific. But, since he's asking, she wants Silverwing to make damned sure Bleach Boy over yonder doesn't do that pile-driver thing.

Someone surely will go scouting. I need a map. How about Nomanisan Island? 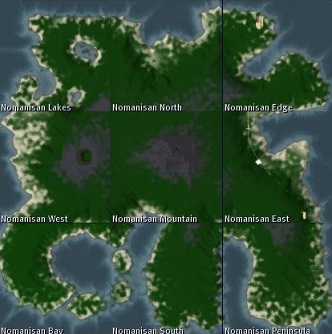 Two "volcanoes", not previously visible due to clouds; the tall one is the observation platform, the lower one is the best access to the machinery that handles the underside of this island.
Note particularly thick forested area visible on left side. Hunts often start there.
Let's say the party started out on the rolling hills of Nomanisan South, so there's plenty of confusing detail to explore in every direction except straight south (where, once you pass the southern beach, there's only ocean). The dropoff from beach into the water is almost immediately straight down to unknown depths, which may serve as the first clue that this is not a real island (or island group, as may be). Exploration best happen in some kind of efficient manner, and with an eye toward where to build a quick temporary shelter, because everyone is about to get wet.

They've all seen Gilligan's Island, in fact some of these men joked about making radios out of coconuts in a previous adventure, so let's see what they come up with here!

If anyone figures out how to receive radio broadcast, they may pick up on a signal that has to be coming from between them and the horizon. Mirabelle Sinjin is repeating 9 numbers (her SSN) and then 20 numbers (the emergency security code for the front gate on the school) in the hope that this coded message will only identify her to exactly the right people. She is not far from the village to the far northwest.

Rán and Carcharo are out there somewhere, thwarted by the rain, hoping for an early chance at the heroes. Rán is particularly ready to get punchy with the Son of Orin. Carcharo just wants to thrash a bunch of somebodies.

Most of this particular session will be about looking for information about their situation, making plans, and getting a feeling of the scope of trouble. I will go along with anything the players want to try so long as (1) they have a decent description of it, (2) it does not blatantly abandon the NPCs to danger, and (3) it respects the dangers posed by the bad guys.

When it's time to wrap up the session: sound the siren, play the New Round music, turn on the special lights scattered around the island, and Arcade announces the start of an Event! Important details:

"Nomanisan Island" was the setting for about half of the original The Incredibles movie, published by Disney
No infringement is intended or implied.
A brilliant person going by the handle "Dana Bergson" in Second Life
did an excellent job of creating that fictitious island in homage, and posted images of it on the old forums here.
I was delighted to showcase these to my players as the Murder World setting for this adventure.
Plot type
Chapter 2: things can get so very much worse
Parent Plot
TED-Meta
Related Characters
Related Organizations
Related Locations
TED-M 1
TED-Meta
TED-M 3

Tales of Justice is a work of pure, unabashed fiction. In fact, it considers itself rather heroic and quite proud of itself. Names of characters, places, events, organizations and locations are all creations of the author’s imagination for this fictitious setting.   Any resemblance to persons living, dead, or reanimated is coincidental. The opinions expressed are those of the characters and should not be confused with either of the authors, since the characters and authors tend to disagree a lot.   Unless otherwise stated, all artwork and content are © CB Ash and Jarissa Venters, 1993-2022, All Rights Reserved.
Original CSS "Comic" theme comes from Oneriwien but has been adapted/modified and expanded by Kummer Wolfe
Article template
Plot
World
Tales of Justice
Author
Jarissa
Publication Date
27 Jun, 2019
Creation Date
24 Jun, 2019
Last Update Date
27 Jun, 2019
Visibility
Public
Views
351
Favorites
Comments
0
Work In Progress
Tags
TED-M Wyldfire