Male wild elf with golden skin with soft dark hair swept into a low ponytail tied with a suede band. My ears appear to have been rounded out at the tips and I have small simple hoops in the lobes but if you look closely there are many piercing holes along the edges of my ears. Eyes that shift colors between brown, green, and blue depending on the light and my mood. My build is tall with a slim waist, broad shoulders, and nimble slender fingers.   I'm wearing black britches and deep green shirt with slightly worn and scuffed leather armor on top. I have leather bracers on my forearms with a dagger tucked into a slim sheath the right one. My boots lace up to mid-calf and are made from leather with a slightly flexible sole, tucked into the right boot there is a barely visible dagger hilt. On my belt, I have a short sword on my left side with a belt pouch tied slightly behind it. Over my left shoulder I have an unassuming quiver (it's an efficient quiver) and a light crossbow in a shoulder sling hanging vertically along my back on the right side. I have a brassard on my left shoulder (smuggling tattooed on my fingers are several gray bands: 1 band on ring finger left hand (lock-picking), 1 band on middle finger right hand (theft), and 1 band on pinky finger right hand (pick-pocketing).

Born in 5874. I grew up in Sedera, Rusatar - a small village on the edge of a forest just outside of Rusatar's capitol city of Ma'akdi. My childhood was normal / average for the most part, and I spent my time helping with chores, crafting, and some farming- as was expected of children. I was always fascinated by the twinkling lights that I could see in the distance coming from a far-off town of Ma’akdi, however. But I didn’t have a chance to travel there.   In 6028, even though my village was small and remote, we heard about the ethnic cleansing happening in Olienn. Our elders tried to shelter us from the worst of the details but we still heard about some of the horrors of what they had gone through…whole cities being taken over and almost wiped out. It was very sad and we could tell that the adults of the village were worried from all the hushed whispers. We were very lucky that the only aspect of the ethnic cleansings we experienced were the occasional refugee passing through Ma’akdi on their way to start a new life.   Not long after the ethnic cleansings had stopped in 6035, I finally convinced my uncle to start taking me with him to his trips into the town to trade for goods since I was now “old enough”. Once I became more comfortable with the town and it's residents, I started exploring more on my own while my uncle was doing business. That's how I was introduced to playing cards. I was the absolute worst when I started playing. My friends told me I was horrible at controlling my facial expressions when I had a good or bad hand. They took pity on me and started to teach me ways to improve; I started playing with others at the tavern to practice what I was learning. A few years later (yr 6038), I was heading into the town without my uncle to play cards as I was getting good enough that I was able to make a bit of a profit to bring back for my village to help with things. That's when I met the eleven rogue Kiha. I found her to be enthralling. But not because she was beautiful, she was actually pretty homely looking, but because she could command a room (when she wanted to) and turn a table like no one I'd ever seen before. I decided I wanted to be just like her. I left with her that night and haven't regretted a moment of it. I still send things to my family and home village every so often but I haven't visited them in decades. 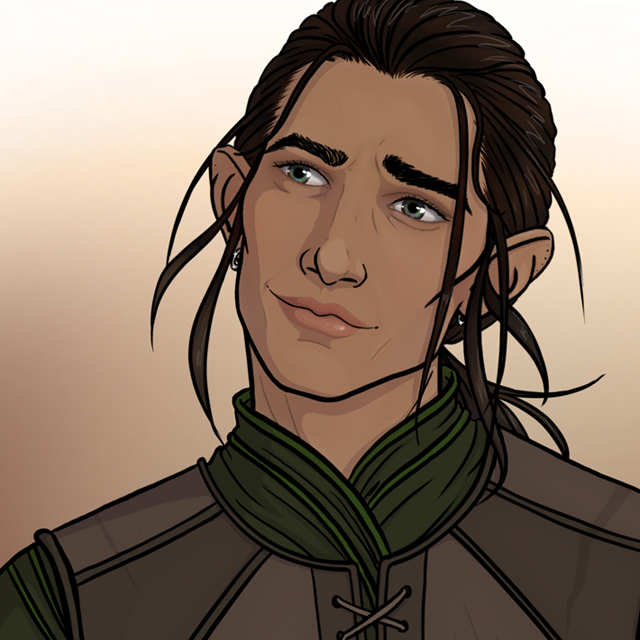 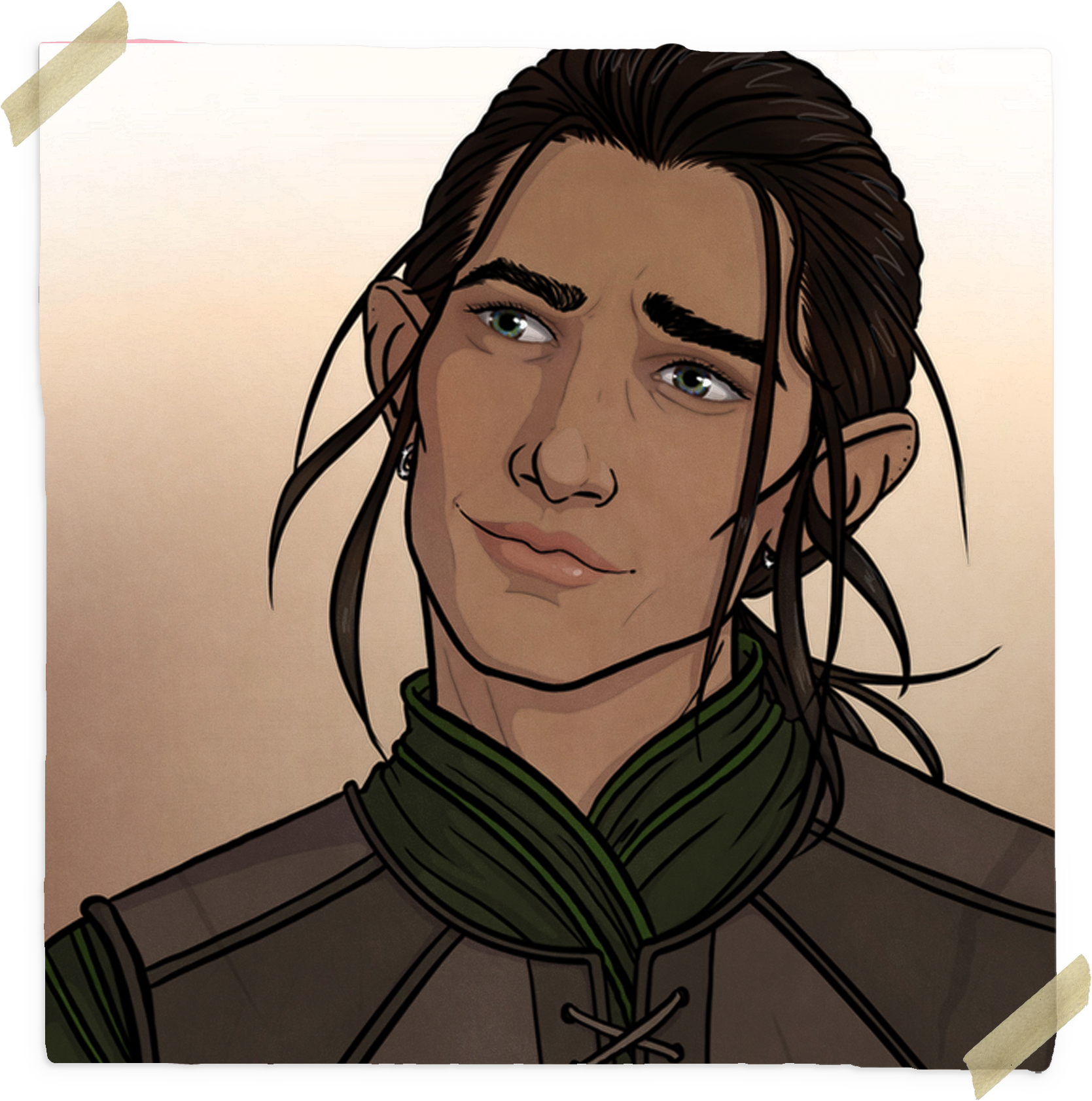 Species
Elf: Thai'Lar   Biological Sex
Female   Age
100 years   Born
Sedera, in Rusatar
Children
Height
5 ft 6 in   Weight
117 lbs   Hair
Brown; medium, pulled back   Eyes
Dark Green   Skin
Medium, coppery tan
Kiha and I traveled all throughout the continent besting the locals and enjoying our winnings. We never stayed in one place long enough to draw attention as bad things can follow attention. Kiha wasn’t a well-trained fighter but taught me some of the skills she knew with using a dagger, short sword, and some basic techniques to help change my appearance in case we needed to be able to hide in plain sight. We made other friends and acquaintances in the same “field” as us who I was able to learn other skills from such as lock picking, climbing and scaling buildings, pick pocketing, passing undetected through different areas, as well as locating and disabling minor traps. Kiha preferred the adrenaline of besting cocky assholes in card games but I would take small side jobs here and there to help some of our friends when they needed back up on a “job”. After I had done solo jobs for a while, I was invited to start doing some of the more dangerous jobs such as breaking into nobility houses or large companies to steal trade secrets. One of the biggest heists we’ve done was on a Goliath War Generals (details?).   In 6254, Kiha was having a lucky streak while we were playing the guards of Rusatar. I had just finished playing my game and was enjoying a bit of ale by the bar while waiting for her. A huge brawl started at her table and she was arrested by the guards who accused her of cheating. I tried to intervene and was arrested with her as an accomplice. We were thrown in jail for several months while awaiting to hear what the guard captain wanted to do with us. (6255) I started to get visions of Corellon. He offered to help me get out of jail if I would swear to serve him as he had a purpose for me to fulfill. I agreed and asked if I could take Kiha with me…Corellon was not interested in helping me with that as it wasn't a priority for him. I was upset but knew that Kiha would want me to get out if I could. I fled that continent and have been on the move ever since.     After escaping the jail, I fled that continent and have been on the move ever since. I fell back into my comfort zone of playing cards but I was careful with who I played with as I wanted desperately to stay under the radar. I often changed my appearance using my disguise kit. Once I made some acquaintances in the circle of rogues, I was able to take some jobs to help wealthy individuals acquire items of their interest - mostly in illegal ways. This is when I honed my skills as a rogue. I can’t say I’m among the best of those in the business but I’m skilled enough I can live comfortably. I’ve always had a soft spot for kids and I try my best to donate to a few orphanages; I also donate to Corellon’s places of worship when I come across them. The stories of what happened to the refuges from Olienn have always stuck with me.   In 6432, I met Kod (post master of Keskala) when he was being attacked by a group of bandits while on the road. Corellon told me that I should stick around to help Kod out. Two years later (yr of 6434) after helping Kod with odd jobs and staying in touch - he officially hired me as part of the post office escorting post and packages to various locations; however he really hired me to help with the smuggling business because he was “getting too old for this shit”. We smuggle a lot of goods across borders but also help relocate people who were former slaves into safer areas. I know that this is part of my atonement for what I owe Corellon. Up until now I haven’t spent too much time in Keskala itself as Kod needed me to do mostly jobs that were farther away that he couldn’t get to due to his other obligations in Keskala.   I still play cards because it's a great way to make some extra cash, gather information, and build contacts in various towns. I don’t take too many independent jobs to acquire items for wealthy individuals anymore but I still take a few here and there to remain in contact with my fellow rogues and keep an ear open to anything that may be helpful to myself or Kod. I mostly use my skills these days to help slaves escape and to acquire some of the items we smuggle.


Click the boxes below to display the list of individuals for each category.
Family
Mother   Father   Siblings   Extended
Major Associates
Minor Associates
Characters