Use the layer selection button at the top-right to view more map pins.

The Year is 1063 Year of Huraedon. The Gral Aelmourne consolidates a vast empire in Uulsan Torall, and the Empire looks on warily. The mighty hero Surimë has reemerged at the right hand of Aelmourne. He renamed himself Felmourne, and is the blood brother of the Great Gral, and aids Aelmourne with his conquests.

The Mad Emperor dur Jane rules in the capital, and he has taken a pagan for his wife, causing a scandal in court. But in general people's lives are good, and trade is common and the common folk are happy.

But there is never a lack of need for adventurers and mercenaries. The world is for the taking.

The starting zone for you guys will be in a region called 'Eastern Lower Huraedon'. Whether you guys are foreigners (e.g. travelers from an island wanting to explore the mainland) or locals is up to you at character creation on Sept. 6. The region has a kind of mediterranean clime, so dry summers and wet winters. The south can get quite hot, the north sees annual snows while the south only half the time will see a lot of snowfall in winter. The northern region is hilly but is still quite populated. The southern region is, for the most part, flat and fertile and is heavily populated. This region is one of the wealthier ones in the Empire.

In the north there are large woods called the Forests of Color, and the Wood Elves live there. There are also a few High Elf cities built by the coast, but they're considered independent political entities, and things get weird when you live with the Elves, so take care if you decide to travel to one of these cities. The region is, for the most part, Human filled. There is a higher-than-average amount of Dragonborn, here, because they sailed over from their southern home island to find some economic opportunities in the wealthy trading cities. Dwarfs are also common in the cities. Halflings sometimes tour around the northern regions, traveling down south, but for the most part they stay holed up and cozy in Greenbuck Half. It's quite a metropolitan region.

As for adventuring opportunities, the most lucrative/dangerous one is to sail into the mystical Relics of Boryen, a group of varied islands that often have great treasures hidden somewhere within, and are also the only places where certain magical spices and fruits grow -- if you're successful with a voyage, you can be set for life. Other than that, Lower Huraedon is in a constant state of war, with many princes vying with each other. You can sign up with a mercenary crew and do various missions. Although that's not the more heroic route and you tend to become a mere cog in a war machine, it's possible to, by proving yourself, be assigned to strike teams that assist the war efforts of your patron. 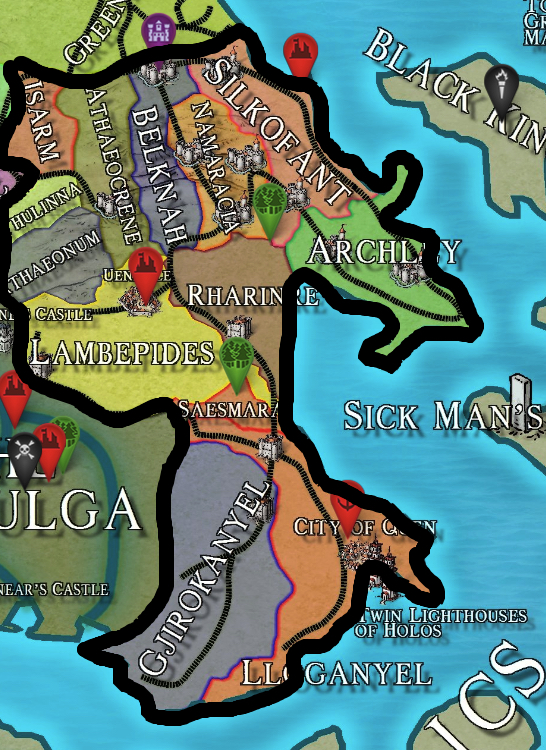 But if neither of these things interest you, you can always try venturing into Vulga, the realm of the Vampires, and see if you can get away with stealing some of their treasures. Just be warned, entrance into their misted realm is easy, but leaving it is difficult.

Anyways, those are just some things you can do. You can head to any major city (Quen is a popular destination) and find jobs to do, or sign up with the Explorer's Guild to get easier access to jobs.

As for how our campaign will specifically start, we will start in a coastal village, and you guys will be there already assigned to some deed or mission. In our Session Zero, you guys can make up why you're there and how you got there. After that modestly railroaded mission, I hope we get to know each other as players and our characters begin to feel more alive, and so after that I'll begin opening up the world so that you guys can decide on what you want to do and ya'll can motivate yourselves. After that mission, you can do any of the above, or you can decide to take a boat and travel somewhere (if you have the cash) be it the jungles of the south or the mountains of the west. I haven't tried to run such a free-form game before (not for a campaign length thing, at least), so please understand that there'll be a few bumps along the way, but I think that having the players be fully motivated (you are choosing where to go because you want to, after all) is a worthwhile trade for the bumps.