Dwarrow are discerned according to the Halls in which they live. The Blue Dwarrow, or the Belchara, are those Dwarrow who once lived throughout the Western Mountains in their One-Mansion. They were a major ethnicity of the Dwarrow of the Das, which has all but been destroyed. They have their own looks, cultures, architecture, and beliefs distinct from any of the other Dwarrowish peoples.

The Blue Dwarrow are noted for their greyish-bluish skin. They are often quite tall -- indeed, they are, on average, tallest among the Dwarrow. Their noses are pointed and bold. Their eyes are opaque and white. Cheekbones are often high, and cheeks are usually well rounded. Their hair is white, for either male or female, and appears regardless of age. The Blue Dwarf beard is as white as his hair, and is grown out according to the Blue Dwarf's status in his or her society. The longer the beard the more powerful and prestigious the Dwarf. The Blue Dwarf's beard is never ringed or bound by metal. The Blue Dwarf's beard is only ever tied by their belt, or by a band of blue cloth. Often these beards are intricately braided.

The Blue Dwarrow and their petty holdings of today are the remnants of a greater Dwarrow kingdom. Two centuries and a half ago, the Belcharin Union was destroyed by the encroaching Empire of Juraedon. The Blue Dwarf people scattered, and now are forced into what is now known as the Belcharin Echelons -- a resource-poor region of the world. The Blue Dwarrow have not forgotten their lost kingdom, and their hatred of Man has only grown over the years.

The Blue Dwarrow were naturally talented magicians, much more so than their other Dwarrow brethren. Many of them can turn invisible at will, or change their size. With such natural capabilities in Magic, the Blue Dwarrow had a large caste of scholarly wizards, and although this caste has since shrunk to near nothing in their current impoverished state, their innate magical abilities still largely remain.

The Blue Dwarrow are skilled in working with metal like most Dwarrow, but they were most renowned for their stonework. A Belchara's home is intricately carved with the story of their family. The wealthiest and most powerful families would have halls stretching many miles, and every pillar and every wall in that hall would've been carved with the history of every member of that family. It would've been a sight to behold. But the Belchara have lost their ancestral halls, and they no longer have the means to continue their tradition.

In general, the Blue Dwarf style of architecture is long and harsh and often gothic. Hollow-eyed idols guarded entryways and sweeping arches and roofs carved with impossible detail were the hallmarks of a Blue Dwarf's mansion.

The Blue Dwarrow once occupied the largest of all the mansions of the Dwarrow. It is called the One-mansion, and every Blue Dwarf had his family's hall connected to it. Wide 'roads' would tie a Blue Dwarf's hall to this singularly vast and deep mansion, often ending at a major dining room so that the Blue Dwarrow could feast in communion with each other. These 'roads' effectively made the One-mansion an underground world and were lit by everlasting light bound in crystals. The One-mansion sprawls throughout the Western Mountains but the Blue Dwarrow have been banished to the least prosperous section of the mansion in the north-west. Dark and deadly creatures moved into the One-mansion proper, and the Blue Dwarrow don't have the strength to retake their mansion. The Empire of Juraedon is satisfied with this situation and leaves the One-mansion and its riches to be pilfered by orcs and goblins.

At the center of the One-mansion is the Grishtahnk Forge -- the largest forgery to have ever been created. All Blue Dwarrow had to commute to the Grishtahnk Forge to do his work. Individuals were not allowed their own private forges. Giant hammers, furnaces hot as dragon fire, and brilliantly bright and fierce enchantments once filled this great forgery, but now it is quiet, its wealth left behind.

The Blue Dwarf pines for his kingdom now lost. His hatred for the Empire and for Man, indeed, for anything except for his kin, is unmatched by any creature in the world. Their land was taken from them, and they demand its return. The Blue Dwarrow are rallied into a frenzy by their priests and wizards -- the One-mansion shall be theirs once more!

But their fall was not entirely the Empire's fault. Truthfully, the Empire was nothing more than the matchstick to light the pyre the Blue Dwarrow sat on. As with most ill fortune for Dwarrowkind, a Dragon lay at the center. Gaorung the Ever-present walked among the Das Dwarrow in a fair form and taught them many things they did not know. His words were poison, and they rang the kingdom's death knell long before the Empire raged upon the doorsteps of Yul-barad. So it is taught by the wise men of Juraedon.

A Blue Dwarf is xenophobic and often cruel. They are quite loud and serious. The rumor that a Blue Dwarf cannot laugh isn't true, though, they simply only laugh among themselves -- it is the presence of another that draws up their hatred full force. A Blue Dwarf is not naturally mean-spirited, though, nor are they predisposed to hatred like the orc, it is their history and culture that have created these fallen people.

They fight dirty and use tricks. 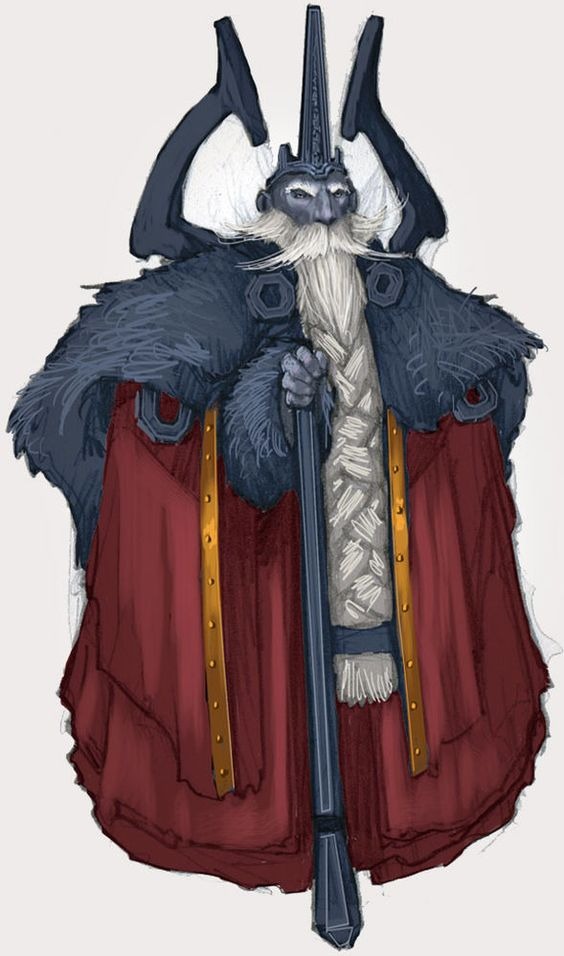 The New Home of the Blue Dwarrow

Fallen Kingdom; the Broad, To Be Ascendant: If you are in the One-Mansion, so long as you have once been at the beginning location of your journey and been at the end-point location of your journey, you cannot become lost along the way. Furthermore, if you fight a Green Dragon in the One-Mansion, then you have advantage on all attacks and saving throws towards and against that Green Dragon. Lastly, you have advantage on Charisma (Persuasion) checks towards or against Giants.

Instruments of State: You can set your lips against and play the great horns that curl around the peaks of the Western Mountains.

Das Resilience⁠: You have advantage on Saving Throws against illusions and against being Charmed or Paralyzed.

Once you reach 5th level, you may also turn magically Invisible until you attack, cast a spell, use Enlarge, or until your Concentration is broken, up to 1 hour (as if concentrating on a spell). Any Equipment you wear or carry is Invisible as well. You cannot use this feature again until you finish a short or long rest.

Growing to Gianthood: You have disadvantage on Attack rolls and on Wisdom (Perception) checks whenever you are not using the 'Das Magic' feature and in an Enlarged state.

Languages. You can speak, read, and write Common (Juraedon), Giant, Dwarrowish (Public Das), and Dwarrowish (Local Dialect: Belchara). Das is the public tongue of the Dwarrow of the Das, and they use it to speak to outsiders. Belchara is a secret tongue that all Blue Dwarrow are loathe to share. It is only ever spoken softly, but carries a great distance. Its sound is as the clatter of turning pages; or as the peal of thunder.