Dwarrow are discerned according to the Halls in which they live. The EkLachen, the Laughing, are those Dwarrow who once lived throughout the Mountains of Das EkLachen in the Halls of Das EkLachen. They were a major ethnicity of the Dwarrow of the Das, which has been all but destroyed. They have their own looks, cultures, architecture, and beliefs distinct from any of the other Dwarrowish peoples.

EkLachen is also a general term referring to the Northern Das: the VolKernen and EkLachen composite people group.

The EkLachen, being close in kinship to the Belchara, were blue-skinned. They were very tall, perhaps only matched by the Belchara, but were also nimble. Their noses were bold and pointed. Their eyes were wide and colored entirely blue—ranging from a darkness almost like night, to lighter shades like the open sky. Cheekbones were high. Their hair was always a black color, regardless of age or circumstances of birth. Their beards were grown out according to their social status. Those considered masters, either of land or people, grew out their beards until they swept the floor. Those who were disgraced or exiled had their beards forcibly cut from beneath their chins. The EkLachen loved to adorn themselves with many rings and necklaces, but forbid piercings of any sort, because they wished to differentiate themselves from their brother kin the VolKernen.

The EkLachen were exiled from their northern halls of Das EkLachen due to Gaorung's vicious assaults. Later, they resettled in the Belcharin Union only to be attacked by Gaorung again; and then they were finally wiped out as a people. It is said that the EkLachen were quick to laugh and were talented in Magic. They were the spirited, northern twin to the rather dour, western Belchara.

The EkLachen were not native to the Mountains of Das EkLachen, where they made there name. They were a group of Belchara dissatisfied with their lot in life, and so went northwards to uncharted lands to make a Hall for themselves. They found the Mountains of Das EkLachen and set about their work, but discovered another race of Dwarrow hidden in the fjordlands. These were the VolKernen, but they were still savage, and lived in rudimentary caves and halls. The EkLachen intermingled with the VolKernen, and the two races worked together to make the Halls of Das EkLachen, which means the Alliance of the EkLachen.

The EkLachen were the principle forgers and raisers of mansions in the Halls of Das EkLachen. The VolKernen were the principle carvers and decorators of the Halls. And while the EkLachen always preferred the darkness of the deep underground, the VolKernen were a people comfortable in the thick snows of the mountains, and loved the shady twilights of the forests — though neither had a great love for the Sun, like all Dwarrow. 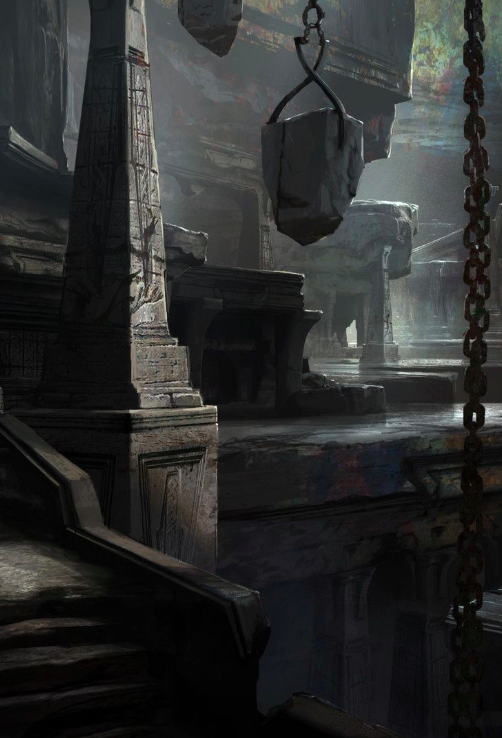 Exiles; the Broad, the Laughing. If you are in the Halls of DasEkLachen, so long as you have once been at the beginning location of your journey and been at the end-point location of your journey, you cannot become lost along the way. Furthermore, if you fight a Green Dragon in the Halls of Das EkLachen, then you have advantage on all attacks and saving throws towards and against that Green Dragon. Lastly, if you come across one of the dark, cool pools of Das EkLachen, then you may meditate there for an hour to gain the effects of a longrest.

Horns of the Mountain. In the Mountains of Das EkLachen, perched at the peaks of high watchtowers, are ivory horns. You may play these instruments, and sound their noise across the vales.

Crevice Climbers. You have a climb speed of 30ft.

Northern Spirit. You can use the Help action as a bonus action. You can do this 3/longrest.

Secrets of the Das. You know and can cast the Prestidigitation cantrip.

Languages. You can speak, read, and write Dwarrowish (Public Das), Dwarrowish (Public EkLachen), Dwarrowish (Local Dialect: EkLachen), and one language of your choice. Das is the public tongue of the Dwarrow of the Das, and they use it to speak to outsiders. Public EkLachen is the pidgin language that the Dwarrow of EkLachen use to communicate with outsiders. EkLachen is a secret tongue that all EkLachen are loathe to share. Its sound is as the trickling of water out of a crevice; or as the noisome cracking and falling of great glaciers into grey waters, ice sundered by the heat of the tyrannous summer sun.