Dwarrow⁣⁣ are discerned according to the Halls in which they live. The VolKernen, the Timber Fellers, are those Dwarrow who once lived throughout the Mountains of Das EkLachen⁣⁣ in the Halls of Das EkLachen. They were a major ethnicity of the Dwarrow of the Das, which has been all but destroyed. They have their own looks, cultures, architecture, and beliefs distinct from any of the other Dwarrowish peoples.

The VolKernen are sometimes called EkLachen, which is the word used to refer to the Northern Das in general.

The VolKernen are fair-skinned. They are short but not very wide; they are rather slender among the Dwarrow⁣⁣. They are probably the most nimble. They are also among the tallest of all the Dwarrow peoples. Their noses are aquiline and pointed. Their eyes are bright, wide, and lightly colored. Cheekbones are high, and cheeks are full. Their hair is always silver, regardless of age or circumstances of birth. Their beards are grown out according to their social status. Those considered masters, either of land or people, grow out their beards until they sweep the floor. Those who are disgraced or exiled have their beards forcibly cut from beneath their chins. The VolKernen like to decorate their skin with many piercings — gold piercings for the wealthy, iron or copper for the less wealthy.

The VolKernen were a major people in the Halls of Das Eklachen, which lays under the northern Mountains of Das EkLachen⁣⁣. They are similar in appearance to the Halorvi people of Pokhrazad⁣⁣. There are a few VolKernen left in the fjords of Juraedon Proper⁣⁣, but they are kingdomless; the dragon Gaorung⁣⁣ destroyed the underground Halls of Das EkLachen. The remaining VolKernen continue their tradition of building log houses on the slopes of the mountains. They also maintain the few aboveground grottos that remain of Das EkLachen — usually small forts or storehouses.

But Gaorung⁣⁣ was not the first calamity to befall the VolKernen. In ancient days, after the Black King Elwëdorf's fall but prior to the arrival of Nelqora, the Dwarrow were experiencing what they call their Silver Age. During it the VolKernen, with their brother kin the EkLachen, made for themselves a mighty kingdom beneath the mountains. This age ended with the sea and land battle of Nova Concord, against the Nelqorana. With the Dwarrow armies smashed, the Nelqorana hewed down the White Gates and ransacked the Halls of Das EkLachen; and it was to never regain its former glory.

During this era the VolKernen were also in close communion with the Caládolhn, and assisted their efforts against the Nelqorana.

Unfortunately, the Halls of Das Eklachen are difficult to enter, and the Northern Empire has not yet issued a decree to commit to a concerted effort to map the Halls out and record its architectural styles. But we do know that the VolKernen liked to carve the history of their families on the walls of their mansions. We also know that they were masterful carvers. Grand, ferocious effigies carved at monumental scales into deep, long lost caverns — these were among their first loves.

The VolKernen Homely Houses are more well known. They are built with high, sloping rooves, supported with many wooden pillars and by many wooden buttresses, and have many windows of colored glass that allow the sunlight to filter in with soft shades. There is usually a great tower rising from the house's center. At this tower's peak an eternal flame is kept: a sign to all weary travelers.

The VolKernen are friendly and hospitable. They are fierce companions, and will kill to defend a friend's honor. 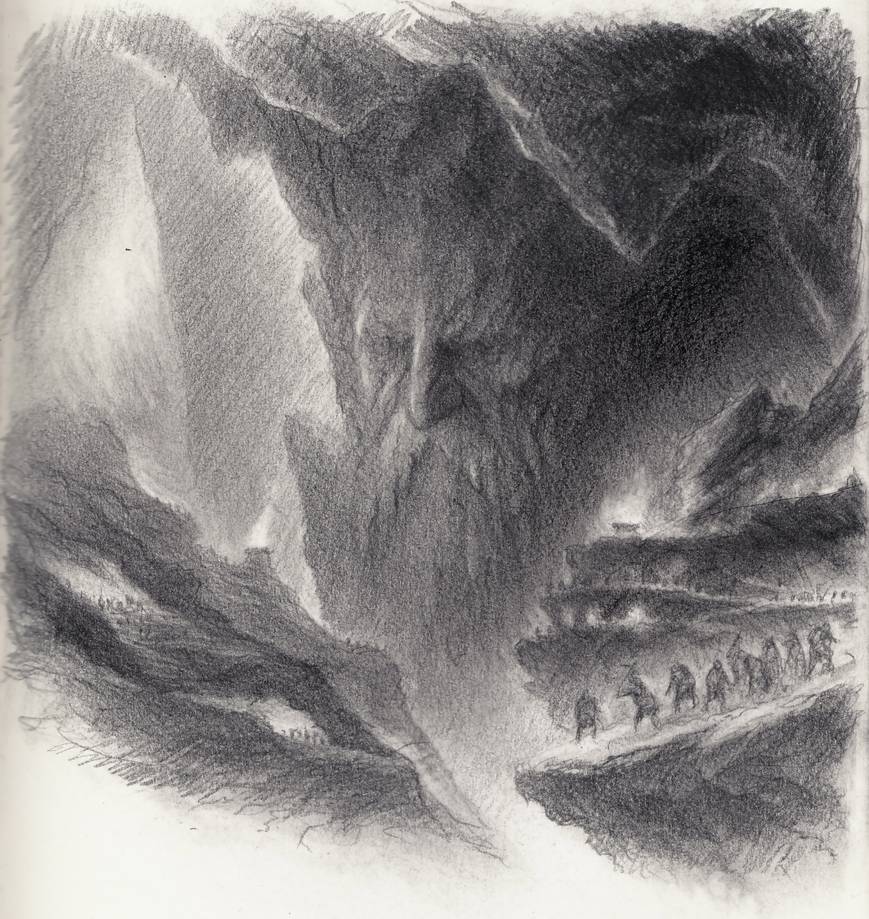 Kingdomless; the Broad, Never to Forget. If you are in the Halls of DasEkLachen, so long as you have once been at the beginning location of your journey and been at the end-point location of your journey, you cannot become lost along the way. Furthermore, if you fight a Green Dragon in the Halls of Das EkLachen, then you have advantage on all attacks and saving throws towards and against that Green Dragon. Lastly, you always know the location of the nearest VolKernen Homely House.

Chisel Drums. So long as you have a chisel and some hard material nearby, you can carve and drum the material to make musical sounds. The image you carve will mirror the noise you make.

Mountain Men. You are naturally adapted to high altitudes, and so are acclimated to heights of above 10,000 feet but below 20,000 — you do not suffer negative penalties from traveling at those high altitudes.

Monumental Carvers; Fjordmen. You have a climb speed of 30ft.

Rush to the Defence. If you see an ally take damage, then you may use your reaction to move up to your movement speed towards the ally. If you end up within 5ft of the damaged ally, then you may also expend and roll one of your hit die to heal him for the amount rolled. This ability can be used 3 times per long rest.

Languages. You can speak, read, and write Common (Juraedon), Dwarrowish (Public Das), Dwarrowish (Public EkLachen), and Dwarrowish (Local Dialect: VolKernen). Das is the public tongue of the Dwarrow of the Das, and they use it to speak to outsiders. Public EkLachen is the pidgin language that the Dwarrow of EkLachen use to communicate with outsiders. VolKernen is a secret tongue that all VolKernen are loathe to share. It is only ever spoken indoors — so heavy are its words. Its sound is as the tumbling of snow from a roof; or as the crashing of a mountain, falling on its face.