Dwarrow are discerned according to the Halls in which they live. The Dwarrow of Ngdheim are those Dwarrow who live in the famed mansion of Ngdheim. They have their own looks, culture, architecture, and beliefs distinct from any of the other Dwarrowish peoples.

The Empire of Juraedon is the nominal overlord of their domain, but in truth, they are more like allies.

The Dwarrow of Ngdheim are what most people think of when the word 'Dwarf' is mentioned. The frenzied rage and marble halls of Tyrandoth; the gloom of Pokhrazad; the One-mansion and the seething hatred of the Blue Dwarrow; the wooden mansions of the Felegosti; they are Dwarrow, too, but the small red furnace, the jolly, bearded faces, the singing, the beer, the grand yet cozy halls, and the delight in craftsmanship are what most think of when Dwarf is said -- and the Dwarrow of Ngdheim exemplify all of these traits, though there are still notable differences that veer from the stereotype. The Dwarrow of Ngdheim are a jolly lot, and it would do well for everyone to visit this hall of the Dwarrow at least once. The world would be a cheerier place.

The Dwarrow of Ngdheim are great friends of the Gnome-folk. The Gnomes always delight in visiting the City of Ten Thousand Mills and Rivers.The Dwarrow of Ngdheim themselves love clockwork and fun contraptions. Indeed, their toy making business invites many nobles to come and to buy presents for their children.

The Dwarrow of Ngdheim are born fair skinned. They are quite short - second in shortness only to the Dwarrow of Tyrandoth - and usually are modestly rotund. Their noses are large and bulbous, and their cheekbones are high. Hair is red or brown, and the aged have white. Their beards are thick, long, and curled. Their beards are rarely decorated but are extremely well cared for -- the mark of a well-bred Dwarf of Ngdheim is his beard. Their eyebrows grow out long and often droop, framing their eyes.

The Dwarrow of Ngdheim are masters of smaller contraptions and mechanical works. Though they are not terrible with armor or weaponsmithing, their Pokhrazadi cousins are much better. Ngdheim's mansions are loud with the sounds of clocks and mills and gears that make life both convenient and charming. The architecture is free and flowing. The Ngdheim architectural style is characterized by the Dwarrows' use of their many rivers and waterways. These coursing waterways are used to decorate magnificent architectural pieces with glowing veils of murmuring liquid -- sometimes they are used for waterwheels, though these too become aesthetic feats. The free style of construction has made the Halls of Ngdheim one of the wonders of the Dwarrow mind. Gems decorate archways, and gold and silver leaf are laid across the high ceilings; but stonework, water-crafting, and gear making are what a Dwarf of Ngdheim loves most of all.

The Waterwheel Arkteel and Smithies

The most famous of the works of the Dwarrow of Ngdheim is the great waterwheel Arkteel. It is a massive wheel fitted with hundreds of smaller gears. These gears power the clockface fitted on the waterwheel, letting it tell the time of day in the dark underground lairs of Ngdheim. Its sound is echoed out through tubes, so that all Dwarrow may keep accurate time. The river Pirgen falls over this waterwheel and turns it. The wheel's turning powers the central halls of Ngdheim. In the center of Arkteel are twelve gears affectionately called the Gears of Time. They are carved out of incredibly large gemstones - each wider than the arm span of an average man - and they lay at the center of the great waterwheel. These items were crafted by the greatest of the Ngdheim smiths, Renkal, and are a national treasure.

Each Dwarf of Ngdheim enjoys his own private smithy. It is a community custom to invite one's neighbors to enjoy a feast and then to be brought to one's private smithy, where a Dwarf may show off his latest contraptions. There is a central, state managd smithy, but it is only used for large projects and is often left out to cool.

The Dwarrow of Ngdheim are loud and happy. They are quick to joke and enjoy a good smoke and a brown beer. They desire greatly the recipe of Pokhrazad's Greengrot ale, but in the meantime have concocted their own unique and delicious recipes. A Dwarf of Ngdheim in the outside world will introduce himself in his own language, first, and then will speak in Common to introduce his craft, his greatest deed, and then his name.

A Dwarf of Ngdheim will sing in battle. It will not be a death chant, though; it will be a song of the home they are defending; and then they will list out the many traits they find most loveable about Ngdheim.

The Dwarrow of Ngdheim have little love for the Giants and have come into conflict with the Giants many times over the years. 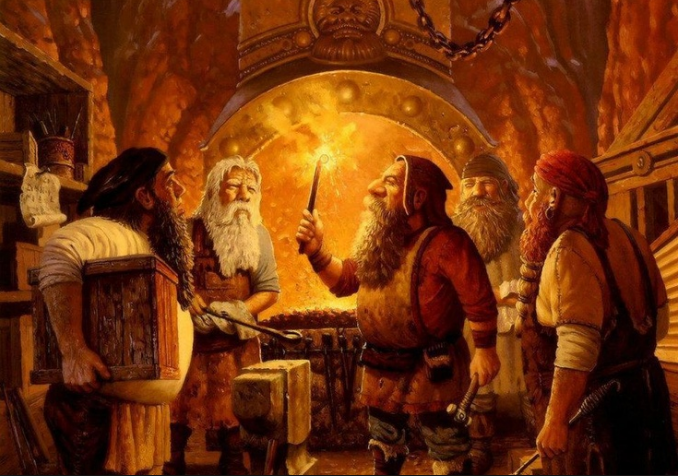 The Jolly Folk; the Bright-Eyed, Singers on Waterwheels: If you are in the Halls of Ngdheim, so long as you have once been at the beginning location of your journey and been at the end-point location of your journey, you cannot become lost along the way. Furthermore, if you fight a Black Dragon in the Halls of Ngdheim, then you have advantage on all attacks and saving throws towards and against that Black Dragon. Lastly, if you ride a Water Slide in Ngdheim, you will remove any chance there is to crash while riding it.

Masters of Water-music: You are proficient with the Water-horn. A strange instrument that plays sounds which remind you of dim, forgotten lakes and cool streams. You also will have a Water-horn in your inventory.

Timely Folk: So long as you have your Water-horn within 5ft of you, you are always aware of what time it is.

Impenetrable Phalanx: If you miss with an Attack roll or fail an ability check or a saving throw, you can gain a bonus to the roll equal to the number of allies you can see within 30 feet of you (maximum bonus of +5). Once you use this trait, you can’t use it again until you finish a short or Long Rest.

Languages. You can speak, read, and write Common (Juraedon) and Dwarrowish (Local Dialect: Ngdheim). Ngdheim is a secret tongue that all Ngdheri are loathe to spread. It is only ever spoken softly, but carries a great distance. Its sound is as the rushing of a chilly waterfall; or as the sound of hammers banging on tin.