Dwarrow are discerned according to the Halls in which they live. The Dwarrow of Tyrandoth are those Dwarrow who live in the famed Commonwealth of Dwarrowkind, which is located south of the Eastern Marches of the Empire of Kilae. They have their own looks, culture, architecture, and beliefs distinct from any of the other Dwarroish peoples.

The Dwarrow of Tyrandoth are often pale skinned and sometimes deathly white. The Dwarrow of Tyrandoth rarely leave their conclaves and halls to see the overworld, and so have adapted to the darkness of the Tyrandoth underground well. A Dwarf of Tyrandoth is short. In fact, they are, on average, the shortest of all the Dwarrow. They are very stout and are able to squeeze into tight and small places with ease. This is a useful trait in the winding caves of Tyrandoth. A Dwarf of Tyrandoth's face looks as if it were pinched, their cheekbones are high and their cheeks are hollow. Their noses are of similar size to the Dwarrow of Pokhrazad, if a bit larger, and are often nestled over a long and thick beard which can sometimes grow so long that they are used as belts. Their beards are decorated in a similar fashion to the Dwarrow of Felegost, using iron rings and baubles to decorate them. Eyes are grey colored and clear. Hair is straight and blonde or brown.

The Dwarrow of Tyandoth are a warlike race of Dwarrow, but are not, surprisingly, too incredibly skilled in working most metals -- a quirk for the usually smith smitten folk. Only in the working of weapons of war is their skill in metalcraft apparent. A sword of Tyrandoth is worth a hundred swords from the forges of the Empire of Juraedon. But for linked chains and conjoined plates, the Dwarrow of Tyrandoth are willing to trade.

It is most surprising, then, to find out that the Dwarrow of Tyrandoth love to work in masonry, and, most of all, love to carve with marble, the most subtle of materials. Their halls are of a brilliantly white hue, emblazoned with the topazes and rubies which they value so highly, and are lit up by flames which can be grabbed and held and which won't burn the wielder. The marble of the Dwarrow of Tyrandoth is unlike marble from anywhere else in the world, and their method to carve their halls is peculiar. The marble is usually quarried from the vales of Arben, which is a flatland in the center of the Tyrandoth Mountains, and is then brought to a hall still under construction. At this point, the hall is nothing more than an empty room, the stone mined away according to a certain height and width. The marble is brought into this room in cubes and is stacked on each other. The Dwarrow will enchant the marble so that, when stacked, they meld and become one entity. Once the room is filled, the Dwarrow will begin their work. The hall is carved from the marble, and the scraps are kept for other uses. It is a monumental project.

Due to the rarity and expense of marble - although it is quite abundant where Tyrandoth lays - only the wealthiest of Dwarrow will have halls or holds carved out of the stuff. The most important rooms in the Tyrandoth mansion will also be carved out of marble and decorated with stone, gold, silver, and gems. It is in the marble, though, where we see the most skill applied.

The marble halls of Tyrandoth are haughty and high. They express the sensitive yet proud side of the Dwarrow of Tyrandoth, who are otherwise boorish and warlike.

The politics of the Commonwealth of Dwarrowkind are complex and difficult to follow for a non-Dwarf. Though the region is united under a commonwealth, and the Dwarrow living here are of the same kind and race, there is still much infighting, both bloody and bloodless, between the various Dwarrow clans and families. One of the major rivalries lays between the eastern-most families -- the jungle and port Dwarrow -- and the old marble families of the mountains.

Tyrandoth hasn't attracted much attention from major Dragons. It has had a few spats with Dragonkind, though. Most of its problems are internal. Tyrandoth is located far from the usual centers of power in the world, and so avoids many of the issues its fellow Dwarrow mansions face. And though the eastern realms of Kilae are still wild and dangerous, especially the realms of the Eastern Marches, they do not hold much sapient danger, and any kingdoms or empires that once stood proudly in the deep jungle have long since disappeared.

A Dwarf of Tyrandoth is most alive when in battle. Their mohawk wearing berserkers scream and rage and sing when they enter the fray, wearing nothing but the most meager of protection. The warrior culture is alive and well in Tyrandoth, and all of the halls within Tyrandoth have their unique cultural take on war and battle. The Dwarrow in Tyrandoth are able tacticians, and their warriors are battle-hardened. When not in battle, a Dwarf of Tyrandoth is almost comically stoic, utterly focused on the duties he must accomplish. But find him in the right mood and place, usually in a tavern or at a bar, and he will be the giddiest of friends.

Tyrandine women are more open than other Dwarrow women, and are willing to openly meet strangers -- although they still very rarely leave their halls. The Tyrandines are still quite recluse, just a little less so compared to other Dwarrow.

The kingdom is wealthy but unpeaceful. Still, it is worth a visit, and the Dwarrow of Tyrandoth provide some of the best weaponry in the southern hemisphere. 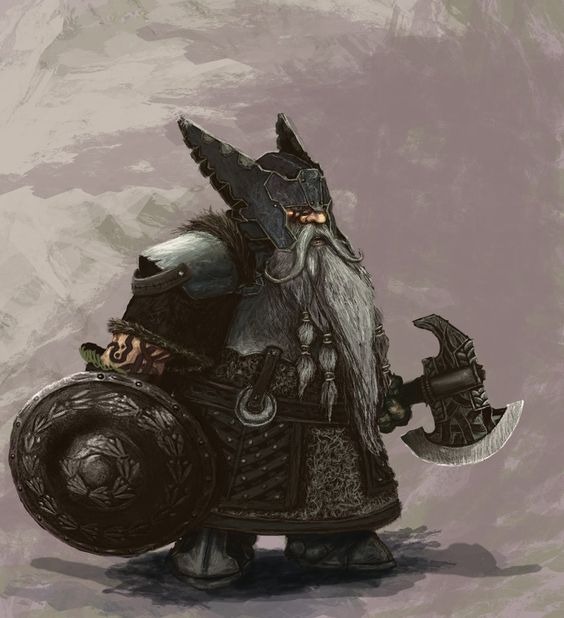 Marble Masons; the Stone-faced, Gentle Lords Though Fierce: If you are in the Halls of Tyrandoth, so long as you have once been at the beginning location of your journey and been at the end-point location of your journey, you cannot become lost along the way. You also incur disadvantage on creatures who try to use the Wisdom (Insight) skill on you. Lastly, you always know whether a topaz or a ruby is real; and you are always aware of their exact values.

Reed Players: You have proficiency with an instrument of your choice.

Powerful Build: You count as one size larger when determining your carrying Capacity and the weight you can push, drag, or lift.

Berserk Warriors: You have proficiency with light and medium armor.

Languages. You can speak, read, and write Common (Kilae) and Dwarrowish (Local Dialect: Tyrandoth). Tyrandoth is a secret tongue that all Tyrandine are loathe to spread. It is only ever spoken softly, but carries a great distance. Its sound is as the soft scraping of alabaster stone; or as the hollow howls of the winds which fill the quarry vales.