A Chromatic Dragon is any dragon that is colored black, blue, green, red, or white.

Created through the science of Marqôd, the chromatic dragons only recently appeared in the world. The winged variety appeared even later, according to tales, some 5000 years ago. They are the only creatures to be innately evil. They cannot escape their nature, nor do they want to. They have their individual traits, and some even have an element of goodness to them. But by and large, they are not to be trusted.

It is impossible to create life. That power is given only to Vahan. The chromatic dragons pull their life from the Metallic Dragons. Marqôd designed the Chromatics so that they would share the souls of their Metallic counterparts. Chromatic Dragons are animated by the Metallic soul. The Metallic dragon need not remain alive after the binding ritual is completed, but if the chromatic dragons are to mature and grow, the metallic dragon bound to it must also grow. For any Chromatic Dragon not yet ancient, a Metallic Dragon is bound in torturous conditions, guarded by the most powerful of the Chromatics.

A dragon wyrmling is the weakest form a Chromatic Dragon may take. Fresh from the egg, but ready for conquest. A chromatic dragon wyrmling is the beginning of the genesis of a terrible monstrosity. It is a dangerous, awful thing with keen intelligence and an eye of greed and swollen ego, prepared to swallow everything up until there is nothing left. Indeed, it is in the Chromatic Wyrmling that, ironically, we see the most Evil. The darkness has not yet had the time to hide, and the dragon's pride and deception are still poorly disguised. In the chromatic wyrmling we find all that is detestable in Man, all that is fearful in the Elves, and all that is ferocious in the Dwarrow.

But their traits themselves may be forgivable, yes, there is pardon to be made towards the creatures like the Orc or Hobgoblin, who, while oftentimes evil, are not necessarily so. But the dragon wyrmling is a thing like a Vampires. It should not be. Against the appearance of every bloody birth of a chromatic wyrmling reality cracks like a mirror. A chromatic wyrmling is born evil. They are the pinnacle of the Devil Lord Marqôd's dark science.

A Chromatic Dragon is born only with theft. The thing to be stolen is a Metallic Dragon's soul. A Metallic Dragon is captured and brought to the hidden fortress of Amîkgur. There it is caged and experimented on until it becomes comatose. This is when the extraction happens. It isn't entirely known how this process is down. The Metallic Dragons who know are loath to tell and the Chromatic Dragons are not much easier to convince. It is forbidden by the Church to personally experiment to discover the truth, and so we will probably never know the full answer. Either way, an extraction occurs and the Metallic Dragon's soul is used to animate a wyrmling corpse.

Now, because Chromatic Dragons are unnatural things, they cannot normally procreate. Indeed, though a 'female' chromatic dragon can bear a child by herself, without the need for sex, the formed foetus, and then child, will always emerge stillborn because chromatic dragons are not born with animating souls. Having emerged stillborn, this corpse is taken to Amîkgur and infused with the aforementioned stolen soul. So then the stillborn is imbued with a soul. The wyrmling comes alive and is subsequently dropped off somewhere in the world to fend for itself—to become strong.

The chromatic dragon wyrmling is dangerous even though it is still very young. But, men will do as men do, and certain men and women want exotic pets. And what pet is more exotic than a dangerous dragon child? So we have dragon wyrmlings as pets on a leash. It is not surprising that most of these attempts end in tragedy. A wyrmling is often as intelligent as the average human. It is not good to treat them so lightly. 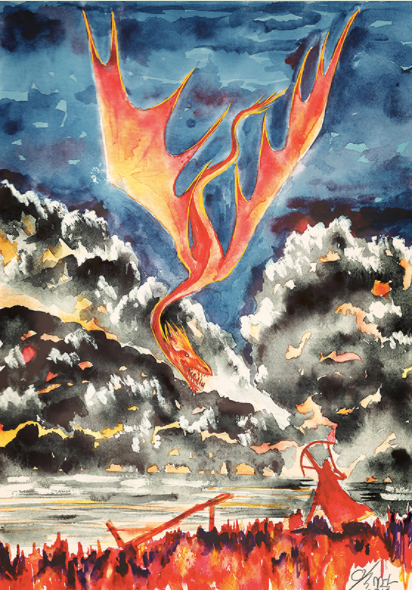