The Religion of the West

Qallanism is the professed religion of both Western Empires. Qallanism is a composite religion sourcing its authority from both its founder Ioshua, who is Vahan, and the collective revelations of peoples across the western continents in regards to history and mystical belief. While traditionally the founder of this religion is Ioshua, his deeds were accomplished many millennia ago, creating confusion; and the truth became hidden somewhat, with much of the historical veracity of our religion needing to be based upon the collective histories of all the western peoples. Most important to this cause are the Elves, who have the greatest stores of records and songs, and have the longest memories of all the races. While there are no Elves today who recall those most ancient days, they are still a more trustworthy source than the many changeable records of Man.

There is one Great Holy Book, called the Premier Holy Book of Qallanism, it is a collection of historical documents written to inspire belief and reliance on Vahan. The most valuable of these words are the words written by persons who have dealt with Ioshua directly and have written down what he had said and done. Other valuable texts are words from the gods themselves, an example being the Prophecies of Matania. Both of these categories rely heavily upon Elven writings.

Second in importance are the writings about peoples in the past that may teach us more about the Heavenly Person of Vahan and His desires and His works. These writings were compiled at a much later date than the first Holy Book. We find that people across the western world share many similar stories (though they may differ and even contradict, though we must add, in non-essential places) in regards to the gods, Vahan, moral works, and the far past. Qallanism has Six Holy Books devoted to these inspired writings. The Church has spent many resources compiling and collecting the various writings of peoples who have been touched by the Divine in days long past. Most extensive of these records are the writings from Alk'kir, leading to Qallanism sometimes being called Alkirity, although this is a slight misnomer, as our religion is not founded nor bound within a single geographical region, but is rather a composite belief founded on the shared historical experiences of all the good folk of the West.

There were many disputes as to some of the Holy Texts' validity, but over time these have settled. A mighty collection of divinely inspired books has been created. Those days of the gods have long passed, and the methods of interpretation of the Holy Books have changed over the ages. But at the very least we can be sure that we hold words that are in themselves true, though they require work to dig through and to discover the truths they mean to tell.

Our greatest symbol is the iron sword pointed downwards, to remind us that we must eventually die to attain eternal life, the suffering we must undergo, and the pains that Ioshua undertook in which we must share to become holy.

Qallanism is the belief in the one true god Vahan and the Twelve Seats (colloquially called the gods), who are subservient to Him. But at the heart of it is the belief that, through Ioshua, we may become sanctified as well, and transcend our evils. The sacred rites are the Consumption, in which an iron sword is transubstantiated into the flesh of Ioshua, and is transformed into the taste and likeness of bread, and the Ablution, in which a circle of priests confer the initial state of Grace upon a person by clearing away the genetic evils and current evils through a rite. This rite summons up the Formility, which is what all Magic is summoned from and thereby used, and makes the Formility apparent and visualized in the form of a thick sheen like water. After the proper words have been spoken the sacrament is conferred, and the person has been raised up into Humanhood.

Ioshua is the humblest of the celestials, as a mere Principality and Man. Yet Ioshua is also the greatest, as he is fully Vahan as well. Vahan is wedded to the church, of which Tevil is the head and is the most illustrious of us all. In the death of Vahan, who is Ioshua, Vahan rose up and brought humanity upwards on his shoulders, so that all who partake of Ioshua, who is Vahan, will therefore partake in all that is Vahan. In this death and resurrection, which Gendûet saw to be a great victory, the power of death was vanquished, and then Gendûet was soon slain afterwards.

Those who do not believe cannot help but fall dependent on their own might. This might will eventually fail, and they will hide in Hell for the radiance is painful to them, and there in the darkness of Hell they will be judged wanting by the legions of Judicials, and there they will unhappily stay, until they become but spirits of ash, tormented forevermore. Hell will be their home, and is their terrible mercy.

The Qallana are the resident celestials of the world. Qallana is the name for the gods in totality, although the name is derived from that special priesthood of the desert which saved many of the texts that would later become our sacred scriptures. The Seats are the governors of the earth, and have dominion over certain parts. Their dominion was created, rather than chosen for. Their personalities are so great, as to say their dominions are but expressions of their loves and ideas.

The Powers are composed of the Seers and Solitudes. The Seers lie in the Halls of Morrôs, and they create music that fills the halls of the dead, and teach of the Holy Present. The Solitudes are most like the Spirits of Intelligence, which reside in Heaven, and they walk like aeries upon the earth, unseen and unnoticed, only felt by a rising of hope and clarity in the hearts of the creatures on the land and sea.

Lastly are the Principalities, who are closest to the mundane. Most prominent are Tevil and Maldir, and counted among them is Ioshua. They are the heroes of the world. They are of the spirits, but they walk in forms like the mortals of Val’Vahan. 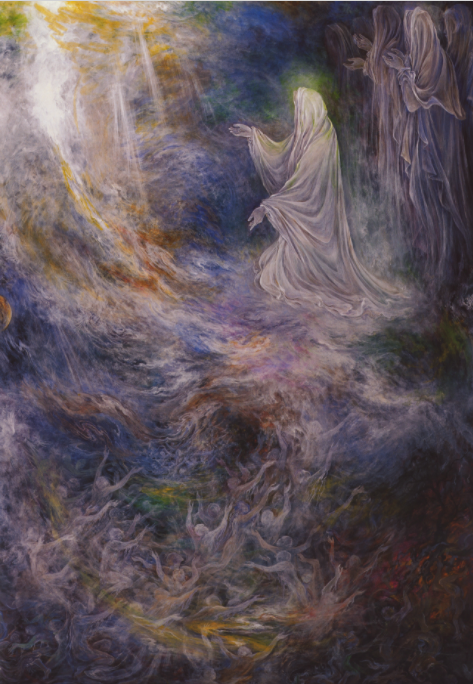