The One-fold is only ever one person. The One-fold acts as Vicar of Uendale in the council of the Emperor of Juraedon and will advise on matters ranging from politics, to war, or to economics. Paladins of the One-fold are counted among the strongest warriors and magicians in the world, backed by both State and Church, equipped with some of the greatest magical artifacts to have ever been found. Ondosto, the recently deceased paladin of the One-fold, was once a member of Felmourne's guild. He made kingdoms tremble with his arrival. Simon, the great Court Wizard to the Emperor Aelmourne, would often request the Church to restrict Ondosto's weaponry, armors, and political undertakings. Even he feared the power of the One-fold.

The One-fold is entirely loyal to the Church. They must be, as they take a special Oath of Supplication, which requires loyalty to the Church and her priests on pains of death. But, the current Patriarch is wise. He has foreseen that the Church may grow corrupt in the future as it once did, and has changed the oath so that the First-fold may rebel against the Church on reasonable disagreements - although he will lose his powers, he will live. But if he were to try to alter his Oath through magical means, or if he were to wreak unwarranted havoc, he will die a painful death as recompense.

Still, the Church holds incredible influence over the First-fold, and it would be prudent to assume the One-fold's will is that of the Church's.

A paladin of the One-fold, besides aiding the Emperor and acting as an ambassador of Uendale, will also be sent to deal with the most troubling threats to the known world. A decree of this magnitude has been announced only three times over the millenniums. Two of them dealt with heretical rebellions grown violent - the Huffite and Liri crisis, and the third was to kill the Emperor of a fast-growing Juraedon. The first two succeeded and the rebellions were crushed, but the third failed. Not because the paladin couldn't kill the Emperor, but because he refused to, and so died as a result.

Ondosto was the latest of the One-fold Order, and was said to be able to duel Felmourne as an equal. But he has recently passed due to old age. It is said that Felmourne wept bitter tears at his funeral.

The average One-fold paladin may be compared to that of a White-ring adventurer, of which none are currently in service.

The One-fold paladin answers only to the Patriarch in Uendale.

Chief artifact of the One-fold paladin is the Gem of Akkabeth. It is a dazzling sapphire that sparkles and shimmers and changes hues in different lights. They say the essence of the sea at dawn is captured within its confines. The diamond acts as a power source to the white armor that the One-fold paladins wear. It is untouchable by anyone not of the One-fold. Many attempts have been made to steal this precious gem, but none have succeeded. 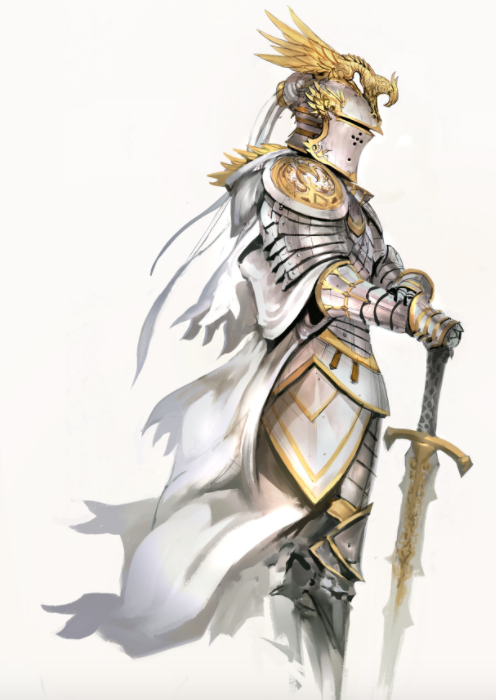