The university system is intricately linked with the Church. Following the Berikoz Reforms, all clergy must be graduates of a university and have a strong grasp on dogma, the arts, and logic. As the primary purveyor of higher education, the Church has great influence over all Wizards in the Western world. Indeed, to be considered a Wizard you must go through the university system, and when Wizards graduate - if they don't become priests - they will probably join a wizardly order also headed by the Church. All priests should have a thorough understanding of magic and the arcane powers, though few will have any talent in actually enacting them. Most find it an achievement to use first level spell slots, while a protegee like Simon was capable of inventing entirely new spell slot levels by the age of thirty. Magic, as a catalyst, and if found in abundance, will give an edge to the talented in greater amounts than it will give an edge to the untalented. So we can have persons capable of killing adult dragons by themselves, and also farmhands who can die after a particularly nasty fall.

Also, there is the matter of whether you are a worthy student. If one decides to apply to a university, then, depending on your qualifications, what you want out of the university, and your prior education, the university can choose to decline or accept your request. For example, if one wishes to study Law at the University of Lille, but has not yet gotten his Bachelor of Arts - which is a prerequisite to studying Law at that University - then the Unversity may reject your request.

Most important is the matter of reading and writing. Anyone may request attendance at a university, but not many are capable of studying in the first place. Few people can read and write, and those who cannot are immediately rejected.

As such, in proportion to the peasantry, it is most often that a noblemen's son or daughter is sent to the university to study. Having been taught by private tutors during their developmental years, they will have the skills to further their education. Of course, there is little reason to go to university unless one wishes to pursue further magical training or one wishes to climb the ecclesiastical hierarchy - both being part of the Church, and therefore making one unable to hold land or titles - so even then, noble sons and daughters don't become university attendees unless they are the youngest of a large family, and so are unimportant to the continuation of the family line.

This is when the system of the monasteries becomes important. The monastic orders, unlike the university system, will accept anyone wishing to take on the ascetic mantle. Because of the duties a monk has, the monastery will most often take it upon themselves to teach the newly made monk how to read and write, and the basics of logic and the arts. Even then, most monasteries only teach the basics. Because of the harsh vows - including celibacy and the inability to hold land and titles - theoretically only the most pious will become monks. Though the process varies across the continent, in general, if a monk wishes to advance their studies and wishes to study at a university, they will go to their abbot, who will then vouch for them at a university they deem appropriate. Note that the person must be a full monk, having advanced through the monastery ranks to full monkhood, and if he or she joined as an adult will thereby being of a modestly advanced age. If the abbot refuses to vouch, then that monk must wait awhile before they can ask again. If the abbot vouched, the university will then review the report given by the abbot and decide whether to accept or reject the prospective student.

Most students at a university will have come from a monastery. This translates into much of the clergy and wizardly orders practicing celibacy and the other harsh vows of the monastery orders. This is how the peasantry may enter the educated ranks, although few choose to enter the monastery willingly -- most peasants find the vows of the various monk orders to be too harsh. Most monks who choose to attend university were put in the monastery at a young age. The aged choose not to study further in part because they do not wish to lose the station they have worked so hard for in the monastery, but which they will lose if they attend university. Anyways, the monks attend university, become scholars, and continue their order's works with greater knowledge of the world.

Indeed, most nobility who attend university will have gone through the monastic system as well for varying reasons.

Many scholars are also monks. In fact, most Wizards you will find, and most scholars, are part of a religious order. The minority (that is, those who were pre-educated enough to join a university without needing the education of a monastery) are mostly from the nobility.

On the Status of the Students:

Students are considered as protected under ecclesiastical law if they attend a non-secular university, and so cannot be touched by the secular powers, are protected from physical harm, and can only be tried by an ecclesiastical court. Many students are therefore rowdy and are wont to vile acts such as rape, theft, and other crimes ranging from petty to heinous. You may ask if the majority are doing this. The answer is they are not. It is mostly the younger students - aged 14-21 usually - who commit these sorts of crimes. They have been sent by their noble families to pursue a greater education, or to control their mean tempers which had been bothersome at home. The university then acts as a sort of boarding school. As said before, not many nobles will send their children to the university, but when they do, it is usually their most troublesome. After graduation, students either study for more degrees, thereby staying longer at the university, or they return home. As for the monks, well, promises have never been a good way to ensure virtue. Like most people, they fall into temptation when far away from home.

On the Status of Women:

Women come to the nunneries as often as men come to the monastery. Indeed, there are probably more nuns than monks. Nevertheless, although there is a sizeable portion of women in every university, women are still in the clear minority as compared to men. This is because of the understanding that a woman's temperament is simply not suited to difficult, scholarly work, and so, although as many women as men apply through the monastery system, more men are accepted by far. Noblewomen are usually accepted according to family affluence. A noblewoman from House Cour da Lione will enter the University of Lille easily, one from House Ivirgen probably won't even be considered. All in all, this means fewer women scholars. But there have been many very intelligent, and indeed, powerful, women in our time. Maria the Cheerful is a Paladin of the Three-fold, and Luxanova of House de Cloche is a protegee with talent well beyond the norm.

Women are not barred from practicing magic, as certain rumors would have it. Witches and warlocks are heinous quislings, but being a Wizard in no way disturbs the natural law. Women have made many contributions in the sciences due to the university system, but men have made many more, thereby proving the wide held belief that women, in general, are simply not cut out for difficult and scholarly work... 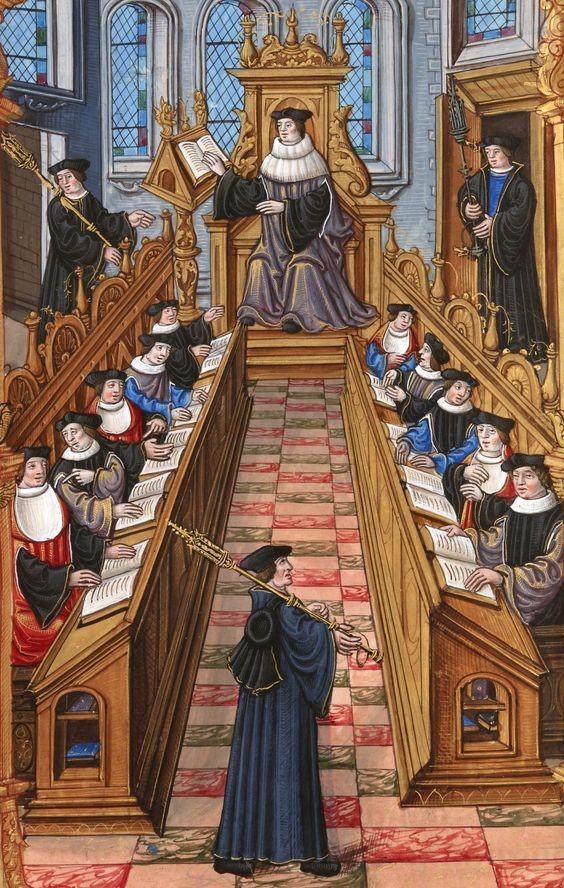