Adventurers and the Explorer's Guild

Adventurers take after the Heroic tradition. Felmourne, Kullervo, Matthias, Tevil: these are all exemplary paragons of heroic might.

Adventurers and heroes are there to protect the weak, kill monsters, deal with danger, and inspire songs. The romantic ideal of an adventurer has led to many wannabes, and wannabes tend to be poor adventurers. So the Explorer's Guild was set up to manage any who would like to travel the world and kill monsters for gold. The Guild gives out contracts to prospective adventurers, and adventurers accomplish the contract thereby earning gold. All loot had to be turned into the guild, and the adventurers got a cut of the loot.

Guilds make money through two methods: through adventurers looting and turning in this loot, and by the contract's patron. The contract's patron pays a fee to set up a contract with the guild. Depending on the difficulty of the task the fee will be high or low. It is normal for a Guild to give half of the fee as a reward to the adventurers.

Sometimes a Guild will give a much higher reward than the fee paid by the patron. The more prestigious branches of the Explorer's Guild will provide food, housing, and training to adventurers who have proven themselves. As for less reputable branches...well, it's not unheard of that a Guild will set itself up in a village, take an entrance fee from prospective adventurers, and then disappear with all their gold.

Explorer's Guilds are headed by the Lead Guild in the capital Juraedon.

Contracts are given out to parties depending on the parties' skills. Skills are determined by previously accomplished contracts, or by recommendation. Skills are publicly shown by the colored rings all adventurers are legally obliged to wear (though most don't unless they want to be spotted).

Depending on ring color you can be contracted to kill a dragon or to chase some goblins out of town. But monsters aren't the only things adventurers fight. Adventurers are contracted by gold, and so are little more than mercenaries.

Unless you are at the top of the leaderboards, you can expect the normal mercenary work. Killing people, warring against kingdoms, pillaging and looting for an army - glorified soldiers. Lower Huraedon is rife with these sorts of adventurers.

As a result, the moniker 'adventurer' is mostly a negative one to the majority of the world. Adventurers are troublemakers; they bring trouble and cause it more often than not. Only the more powerful sorts of adventurers - the ones that swagger in gilded robes and glowing plate, carrying weapons that give off powerful auras - are thought of as akin to the heroes of old, and these powerful adventurers are respected and feared by the common folk.

Wizards especially are feared. The title 'Master Wizard' is one reserved for the obviously arcane. But these powerful adventurers aren't only feared for their might, but for what they also represent.

Most, if not all, of these higher tier adventurers are on the payroll of the Empire. They represent her strength, and they execute her will. Eventually, if you manage to reach these heights and attract attention, a messenger will find you on the road. The messenger is the same. He has one eye and a wide brimmed hat. He has golden teeth, and a silver walking staff. On his belt - which is buckled to the last hole - hangs a sword which glitters like ice. His name is Drill-tooth and he is bound to service for the Empire.

He will give you an offer: join the assorted adventurers of the Empire and follow the Emperor obediently, or be hunted down by the Three-fold Order and be slain.

Decline and he will harass and follow you forever. Drill-tooth will send magical message after message of his location and where you are. He will follow you wherever you may go, private or magical - that is his power. And eventually, you will be caught and executed by the Three-fold.

So most adventurers accept. Besides, nothing really changes if they do. All that's different is that if they are commanded by the Emperor, they must follow immediately rather than putting those charges on a backburner and hiding somewhere.

Of course, if you lay low and don't attract attention, Drill-tooth won't find you, regardless of your strengths. 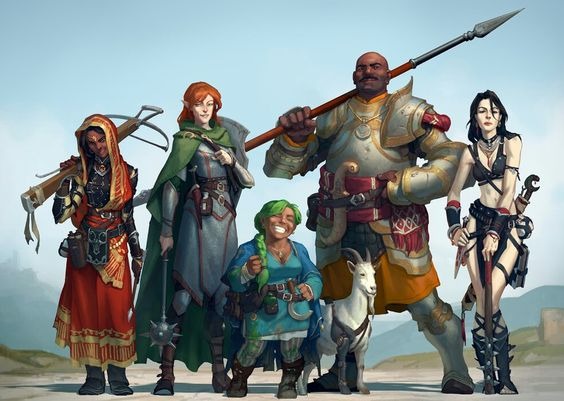 I love the concept of heroes for hire. A place for people to fight for others, or at least to fight for a purpose aside from wars. With multiple guilds, is there any guild competition, one guild trying to gain stronger members to gain more favor and reputation. Are there any specific famous guilds? Also, how do guilds deal with rogue adventurers. Wouldn't rogue adventurers also be wanted as they be a less pricy alternative to hiring a member of a guild? And would famous or infamous adventurers be collected by Drill-tooth? Seems harsh that if you become well known, it's serve the empire or die. You become famous and you are denied freedom.     Also, the wizard part in the "poor reputation" section seemed kinda out of the blue.

lol that's a lot of questions. I'll start with the 'wizard...reputation' question first. Since this is for my DnD group, I try to make any article that can be related to my group definitely related somehow. We have a Wizard in our party, so I wanted to tell the Wizard that he would be viewed as 'cool' in the world.

This is a somewhat low-magic world, meaning that there aren't too many 'true heroes'. So you can imagine 95% of everyone is at or below level 1 (if you play DnD). The remaining 5% are split unevenly from 1-20. Because of the relative rarity of 'true heroes', there is extreme and fierce competition among the wealthier guilds (located in the cities of Rhun, Lille, and Juraedon) to poach these powerful individuals. But for the vast majority of guilds throughout the Empire, they are, for all practical purposes, glorified mercenary recruitment grounds -- meaning they have little means to acquire 'true heroes'.

I ought to add this, but there are expected tax rates for adventurers, depending on what rank and ring they have.

As for rogue adventurers, they will be people who have broken some law or something I suppose. The secular powers will have the ability to imprison or kill any rogue adventurers who have gone too far. If the matter is small, then the Adventurer's Guild can conduct whatever local punishment they please. If a truly 'heroic' and powerful adventurer group is on the loose, then the Empire will send one of the Paladin Orders in Uendale to take care of them. With Drill-tooth under the Empire's control, finding a rogue group is only a matter of time. And with a Church-backed, State-backed powerful Paladin Order on your heels, it's only a matter of time before that rogue group is put down.

Rogue adventurers are surely less pricey, as they don't require a middle-man - and there is competition between these independent groups and the Adventurer's Guilds. And if those rogue adventurers have the required documents, have a fine reputation, have all the legal protections, and have many connexions from which they can find contracts, they will do very well for themselves. But this era is a civilised era, and the secular powers that be would rather have all men-with-arms to be corralled in the Guilds. So the legalese becomes quite difficult to navigate as a rogue group -- especially in the wealthier, northern territories.

Once you become known to the greater world, Drill-tooth comes a'calling. It's definitely a matter of control. You don't want vigilantes running around. All adventurers are collected, and the Empire is powerful enough to strong-arm most, if not all, adventurers into their control. It's harsh, but, oh well. I wonder how my players will react to this.