They are considered a country underneath the Imperial government.

The Vault Court of Florental

The young King Tarcil rules at the Court of Florental -- the name for a beautiful throneroom with ornate carvings, pillars, and artistry styled in the late southern-colonial Nelqorana period. It is the only place in the city, besides the foundation stones, to remain entirely Nelqorana. This is because the Court also acts as a vault. It is an enclosed area with only one entrance and exit. When closed with the correct magical incantations, this court will become impenetrable and impregnable. Necessarily, the outer shell of the vault is indestructible, but the magic also suffuses the objects within the court. The pillars, the bridges, the stairs and the throne are all immutable to change. No hand may alter them. The rugs can be shifted and the braziers reformed and the water in the small moat changed, but nothing else is altered from the ages past.

Unfortunately, though the objects themselves are invulnerable, the Magic used to seal up the court is lost, so the court lost its value as a defensible position for the nobility to hole up in.

As for the nobility in the court, there is firstly the king, and then there is his council of advisors. Premier among these advisors is Magus, who is called the Prophet for his 'prophetic' advice. The Great Houses that are required in court at the moment are also sometimes present. Then there are the Lesser Houses, who are vassals to the Great Houses -- the Lesser Houses always have courtiers vying for the king's attention. Much of the king's time is taken up with dealing with the Lesser Houses and their quibbles. There are also the knightly orders, adventuring guilds, adventurers, foreign diplomats, merchant guilds, artisan guilds, imperial decrees and those who give those decrees, forestry guilds, and the Ladies of Court. Lastly are the common petitioners whose problems can't be resolved in the court of law for one reason or another.

King Tarcil has his hands full, and eagerly awaits the return of Magus Medivh Arestades. 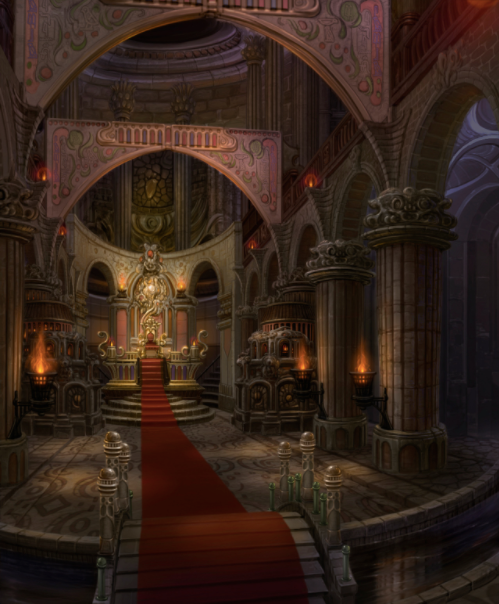