Dwarrow are discerned according to the Halls in which they live. The Dwarrow of Felegost are those Dwarrow who live in the famed kingdom-mansion of Felegost. They have their own looks, culture, architecture, and beliefs distinct from any of the other Dwarrowish peoples.

The Dwarrow of Felegost vary in skin color from pale to a more sallow color. The Dwarrow of Felegost are stout, thick, and are of a medium stature for Dwarrow. Their noses are large and are a dominating facial feature. Their eyes are often opaque and darkly colored. Cheekbones are high, and hair is thick and curly. Eyebrows are often long, though they don't grow out and droop like the Dwarrow of Ngdheim. Their hair is usually brown. The Dwarrow who work in the sulfur pits will have hair flecked with yellow. Felegosti beards are extraordinarily thick and long and are decorated with iron rings and baubles -- similar to the southern Dwarrow of Pokhrazad.

The Dwarrow of Felegost are like most Dwarrow and are skilled in working most metals -- though they dislike working the lustrous metals. Their armor and weaponry are made well and are comfortable to use in both extreme heat or cold. The Dwarrow of Felegost are famous for their wood carvings. The Dwarrow of Felegost imbue their carvings with the hardness of iron, and a wooden shield by a Felgosti is of equal worth to one of metal. Their wooden halls are cozy and do not have very high ceilings. Carved on their walls is the history of their people. The Felegosti build their halls with a flowing style, and it is almost ubiquitous to the culture, though it is not as free a style as found in the Halls of Ngdheim, and there is a controlled element in their carvings.

Like most Dwarrow, the Felegosti prize their hand-made items above all else.

Felegost is a large and sprawling kingdom situated under the Enkra mountain chain. There is much iron, copper, and tin to be found here, but little gold and silver. It is a good thing, then, that the Felegosti find the lustrious metals too soft and malleable for their preference.

Felegosti forges are many but are small compared to most Dwarrow forges. They are hot and loud places. Only Dwarrow are allowed inside these private enclosures. The forges are usually family, rather than state, managed.

Felegosti women are kept secret and hidden from the world. This is a common Dwarrow characteristic.

The Dwarrow here are quite adept at fighting the mountainous creatures that prowl the caves and woods. Among these creatures are White Dragons, and the Dwarrow of Felegost have fought Verinen the Ice Snout, whom they call the 'White Death'. But their walls are high and thick. And the Felegosti are stalwart, and their halls are prospering. It seems that the Dragons have failed to raid Felegost of its wealth, and they will continue to fail for years to come.

The Dwarrow of Felegost are loud and happy and like to get drunk. They are gruff and serious when need be but prefer a good joke and a good laugh. A Dwarrow of Felegost is proud of his kingdom-mansion. Their ethnicity is a less secretive one than that of the usual Dwarrow, and alone among the Dwarrow do they inscribe their secret names on their graves. They happily share with the Empire of Kilae their mining and smithing secrets -- for a price, of course. A Dwarf still knows the value of knowledge, generous though he may be.

A Dwarf of Felegost will cry and roar in battle. But do not mistake their eagerness for stupidity: they are able tacticians. Felegost is a Dwarf kingdom that has, unusually, experienced more peace in its time than war. Orcs are not a problem for them as it is for the northern Dwarrow. Felegost is a wealthy and happy kingdom. No wonder, then, that even the usually tenacious Dwarrow of Pokhrazad sometimes leave their homes and wander into Felegost's warm halls.

The Empire of Kilae is the nominal overlord of their domain, but in truth, they are more like allies. 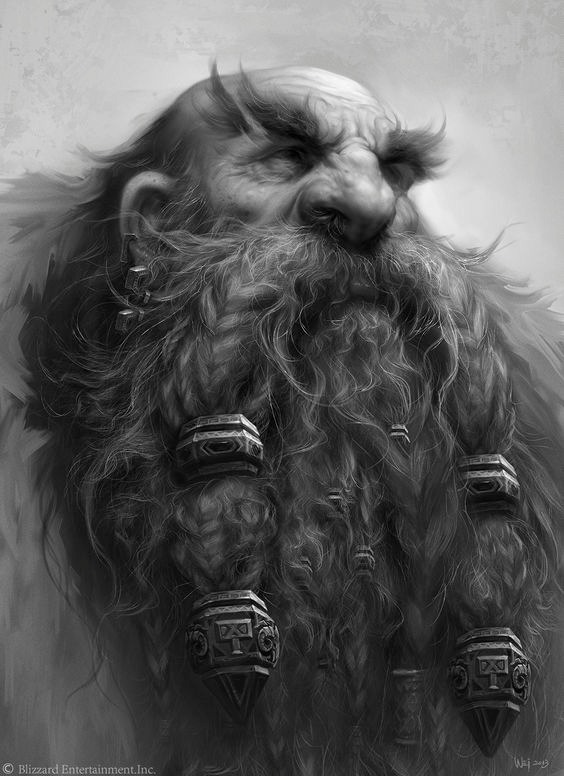 Lovers of Wood; the Deep-Bellowers, Lords of Mountains and Jungle: If you are in the Halls of Felegost, so long as you have once been at the beginning location of your journey and been at the end-point location of your journey, you cannot become lost along the way. Furthermore, if you fight a Dragon in the Halls of Felegost, then you have advantage on all saving throws against the Dragon's breath weapons. Lastly, so long as a creature is within 300 feet of you, you may project your voice so that they may hear your voice as clearly as if they were next to you. While you project your voice, all creatures within 300 feet of you will hear you clearly.

Noisy Singers: You have proficiency in an instrument of your choice.

Skilled in Woodcraft: In addition to the artisan tool you gain proficiency in as a Dwarf, you are also proficient in Woodcarver's Tools.

Kingdom of Sulfur and Snow: In addition to the Poison resistance you gain from being a Dwarf, you may also choose to have resistance to either Fire or Cold damage. Only one.

Languages. You can speak, read, and write Common (Kilae) and Dwarrowish (Local Dialect: Felegost). Felegost is a secret tongue that all Felegosti are loathe to spread. It is only ever spoken softly, but carries a great distance. Its sound is as the tumbling of logs down mountainsides; or as the gentle creak of wood in a well-lived-in house.