Juraedon Proper is divided into nine territories: the Archine Peninsula, the Peninsula of Pelican, the Eastern Vale of the Sein, Iru-anc Terrain, the Hol Flatlands, the Coastal Ovtrelands, the Fjalktir, the Mountains of Das EkLachen, and the Golden Protrusion.

The Archine Peninsula is a protrusion off of the Peninsula of Pelican. It is a hilly region and is populated by mostly fishermen and herders. The region has been heavily deforested to supply the ever-growing shipping trade. It is a cool and wet region. The sea is often stormy and so is the weather. It rains often and it rains hard. Winters are cold and snow falls heavily. By far the largest city here is that of Archine.

The Peninsula of Pelican is dominated by the Hopper Mountains running through its centre. The peninsula is otherwise a hilly land with little arable land. The coast is laced with many inlets and rills and dotted with many coves and hidden places that disappear and reappear with the tide. Villages are mostly along the coast, dug into the many valleys of the peninsula. It is quite cool. It rains often. The winters are cold.

The Eastern Vale of the Sein is very hilly with dense and dangerous forests. The population is sparse and hardy throughout the vale, and most villagers are based around the waterfall blacksmiths and the oncoming trade as the soil is either poor or the river floods too violently to have consistent farming. There are many barbaric tribes in this region, preying on unwary travelers. This region is a wildland between the safety of the villages. It grows quite cold and wet in the winter, and the snow piles on thickly.

Iru-anc Terrain is a geographical unit covering the bulk of Iru-anc, the central region of Juraedon Proper. The coastal areas of Iru-anc are thin strips of flat terrain. For the most part, the Iru-anc Terrain is composed of undulating hilly lands and valleys of modest height. The land is not extraordinarily arable, but villagers are still able to eke out a living acting as fishermen or poor farmers. Snow comes heavy and winter is harsh and wet. There are often storms, and the sea is unpredictable as is the weather.

The Hol Flatlands is a protrusion from the Iru-anc Terrain. It is a broad, low-lying area that is both wet and marshy. Many fens and rias cover this region. The land reveals a great amount of fertile wealth when the bogs are drained. The weather is stormy and unpredictable. The winters are hard and wet. There are a great many forests in this region, yet to be cut down. The population is not dense, and you would be hard-pressed to see too many people unless you were traveling along the coast.

The Ovtrelands is the strip of undulating hilly terrain that slowly grows into the Fjalktir highlands. It is bounded by the Archine Sea and the Fjalktir to the north. It is here that the boreal forests of the north begin to appear. Along the coast are plains with residual hills. This region of Juraedon Proper is more densely populated than the rest of Juraedon Proper's hinterland. The coastline is heavily populated by various fisherfolk. The deeper territories are less populated and are filled with sheepherders and goatherders for the most part. The coastline has been slowly drained, and wealthy marshlands have been reclaimed from the sea. The weather is stormy and unpredictable. Summers are mild and warm. Winters are wet and cause great storms and snowfall.

The Fjalktir is a region of highlands. The region is heavily forested, covered by a great boreal forest, and is dotted with igneous extrusions. The region is home to many herders who guide their herds to feast on the darkly green grass. The weather is often rainy and gloomy but is even and predictable. The winters are incredibly harsh and last a long while.

The Mountains of Das EkLachen are characterized by aretes. Towards the north, the mountains slope into fjords. The many rivers that criss-cross this region make for easier travel through the mountainous terrain. The region was once heavily inhabited by Dwarrow clans, although much of this population has since migrated south since the conquests of Juraedon. The region is unpopulated for the most part. Hunter lodges and homesteads are pitstops for would-be travelers. The weather is cold year-round, is rainy, sometimes stormy, but is usually predictable. The air is clear and good for the lungs. There is no real industry in this region.

The Golden Protrusion is a large region of flat land that juts out from the north-easternmost tip of Erub and ends at the Beart Promontory. It is a well-farmed, densely populated region that has undergone heavy deforestation. The region's weather is unpredictable and often stormy. The people are, for the most part, farmers. During the hard winters, the nearby waters begin to freeze over. It is due to magical means that the Elsmere Strait and the Juraedon Canal remains open year-round. 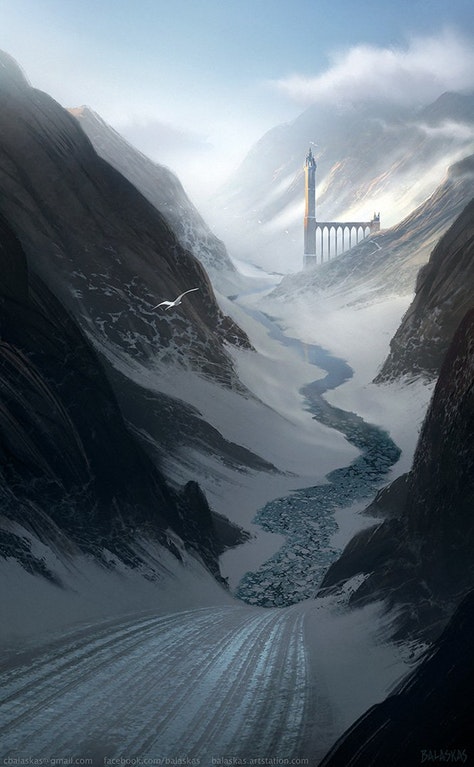