The Men of Alk'kir are a diverse group united in their history of thralldom to the ancient Muyyaqar — the Desert Elves. But those times are long passed. The Anx Tentyrics have flourished and multiplied in the wide landscapes of Alk'kir. Though the desert looms like the tyrannous sun, they have become great. May the rains bless them with plenty, forever!

The Anx Tentyrics have separated into many feuding groups, held together only by the will of the King of Alk'kir and the Empire standing behind him. They bristle for freedom. These groups are the Mendites, the Haliptians, the Severites, the Ben-i-Fez, the Digo, and the Blue Micha.

The Mendites are the industrious and populous people who live near the Mendesian River. They have long been, along with the Haliptians, the political heart of Alk'kir. They stand at about 5'7. They are characterized by a long face, slender stature, hooked nose, fleecy and dark hair, and dark, wide eyes. They are brown-skinned, and those living nearer to the Small Dwarf Hills are of a lighter complexion.

The Haliptians occupy the northern marshes and the dry plateaus of Halip. They are separated into many tribes and make their living mostly by herding. They are of a stouter and more thickly muscular build, standing at about 5'4. Their faces are wider than the Mendites, but are still long. Noses are projected and hooked. Foreheads are domed. Hair is grown long and is easily tangled. Their eyes are wide and dark. Their skin is copper-colored.

The Severites are those populous people who live in the valleys of the Grain Coast, which edges the northern parts of Alk'kir, and is watered by the springtime floods. They are tall and swarthy, with a ruddy complexion. They stand at about 5'8. Their faces are wide, with high cheekbones, and they have sloped foreheads. Their stature is noble and slender, and their hair is thickly curled. Their eyes are oblique and darkly colored.

Ben-i-Fez refers to the westernmost people of Alk'kir. They are the most impoverished of the Alk'kirians. They are a rather autonomous group, given to tribal infighting, and are inclined to cycles of conglomeration and separation. There have been great kings made of these people, but their kingdoms invariably fall before anything of major note is accomplished. They are tall and willowy, standing at about 5'10, with wide faces and hollow cheeks. Their lips are full. Their eyes are oblique and dark. Hair is dark and tightly curled and is often braided. Their necks are long and foreheads are sloped. Their noses are long and wide at the base. Skin is a deep shade of black.

The Digo are the infamous pirates of Alk'kir, and are highly skilled sailors. They live in the west, near the Western Mountains and Aju Estuary, and along the many rivers that flow down from the mountains. From this place, they set out and raid and pillage as they will and please. They are short and stocky, standing at about 5'3, with a strong face and a long nose with a flattened base. Lips are full. Eyes are oblique and fairly colored. Hair is grown out long and is gently curled. Necks are long, foreheads are sloped. They have an extra row of teeth. Their skin is a dark black shade.

The Blue Micha reside in the central-southern deserts of Alk'kir. Alone among Men, they have had good relations with the Blue Dwarrow. They are skilled in magic and are known as warlocks and witches to most Alk'kirians. Wild and uncontrollable, this people has long been the bane of the Kings of Alk'kir. They are tall and slender, standing at about 5'7, with round faces and a small, upturned nose. Lips are full. Eyes are wide and are entirely colored by a single shade, usually dark. Hair is curled tightly and kept short. Necks are long, foreheads are domed. Teeth are fine. Skin is often black as jet. 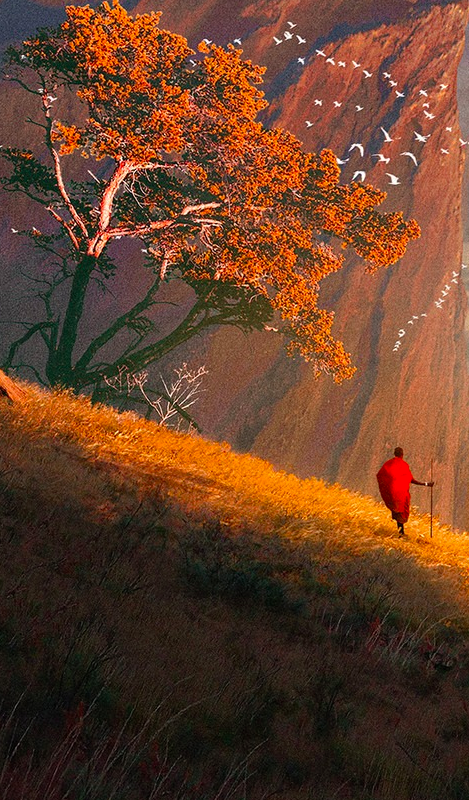 In the Shadow of the Desert: You are naturally adapted to hot climates, and so automatically succeed on saving throws regarding Extreme Heat. Also, you are proficient in the Survival and Animal Handling skills.

Kingdom of Tribes: You have proficiency with the rapier, shortsword, longsword, and shortbow.

Observant: One needs to be well aware in the desert — especially when one is delving ruins. You have a +5 bonus to your passive Wisdom (Perception).

Languages. You can speak, read, and write Common (Juraedon), Human (Local Dialect: Alk'kir), and one extra languages of your choice.