Ghosts of the Desert

Elves, like Humans, have explored and settled the farthest corners of the world. The Elves of the Alk'kir desert are a sub-race of the Itie'lman; those called the Blind Elves or the Western Elves or the High Elves. Properly, the Elves of Alk'kir are numbered among the High Elves due to their shared history, though they do not have many of the physical features many attribute to a High Elf.

It's believed that the Pol-Muyyaqar were once part of a greater clan, joined with the Naharaim and Parasquen, but now separated after their assault on the gods.

The Elven race reached its brilliant years during the Mythic Era, but now they are on the decline and their glory wanes just as the moon makes way for the sun.

The Elves of the Alk'kir Desert have their own peoples and tribes and their own names which they give themselves. As a general term calling the Elves of the Alk'kir Alkirians is correct — they live in Alk'kir after all. As a general people and clan, the Alk'kirian Elves are descendants of Elves who were once part of the Muyyaqar clan, headed by the first Tentyric King Is-Isil. Though after so many years the Alk'kirian Elves do not identify themselves as part of this clan of people anymore, it is still proper to call them the Pol-Muyyaqar.

The Pol-Muyyaqar of Alk'kir are darkly colored, ranging from a coffee brown to a black like jet. They have dark hair, usually black; those to the east have dark brown hair. The western Desert Elves have fleecy hair that tends to curl tightly, and men and women alike braid their hairs into tight tails. The eastern folk have frizzy, thick hair that they grow down to their waists or feet. The Pol-Muyyaqar have wide, dark eyes, usually colored brown, though at night they become like bright, yellow fires. Their lips are full; some of their noses are lithe and flat and broad, others have bold noses slightly hooked; foreheads are full and those to the west have sloped foreheads; and cheekbones are tall. Their statures are high. Their extremities range from slightly gangly to perfectly proportional. They are light on their feet and don't impress footprints on the sand. Usually muscular, the Pol-Muyyaqar are also of the muscular and curvaceous build that is considered youthful and beautiful across Alk'kir, with strong hips, full chests, and long necks.

Listed below are the peoples and tribes considered Elves of the Alk'kir.

The Elves, though diminished, still retain the wisdom and the skills of far ages past, and can do wondrous things beyond most Men. Most famed among the tribes of the Desert Elves are the Tribes of Penbos. The ride along the dunes on long, thin boards with sails attached. If the winds are low (they rarely are in the western sandlands) then beasts of burden - large snakes that shimmy over the dunes - will tow their skates across vast distances. The Elves of the Tribes of Penbos also use white hawks to catch prey in the desert. These hawks can travel far and swiftly and require little food or water. These hawks are clearly touched by Elvish magic.

The Elves of Penbos are sometimes - heretically - worshipped as guardian spirits. Travelers who have underprepared will sometimes be rescued by these Elves riding on their sand gliders, and cared for a short while before being dropped off at a communal well.

The largest tribe of Desert Elves is the Asarmoth tribe. The Desert Elves are, like all their kin, declining in numbers and strength. They are a nomadic people. Sheep and tent are their prized possessions, and the Desert Elves wander among the great pyramids which their far forefathers built. They are content to decline and to reside in the Halls of Ashka until the Final Days.

Not much else is known about these Elves. They are reclusive and are among the smaller tribe groupings in the Alk'kir desert. They do love to dance and sing under the desert night sky; like spirits shimmering beneath the midst of innumerable stars.

While the Empire of Juraedon and the Kingdom of Alk'kir are nominally overlords over the Alk'kirian Elves, in truth Elves are too wily, magical, and powerful to be tamed by anyone lesser than themselves. A system of live and let live is approached. 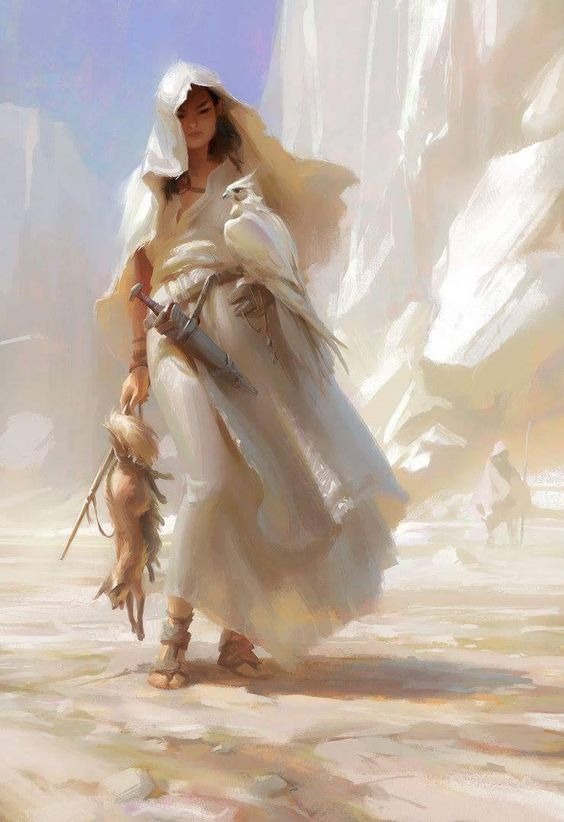 Age. You are an Elf of the West. You will live forever and are bound to the world, destined to dwell in it forever. Death only temporarily thrusts your spirit into the Halls of the Dead, and eventually you will return with memories intact.

Size. Pol-Muyyaqar are about 6'1. You are size Medium.

Fleet of Foot. Your base walking speed increases to 35 feet.

Darkvision. Accustomed to walking under the revered starlight, you have superior vision in dark and dim conditions. You can see in dim light within 60 feet of you as if it were bright light, and in darkness as if it were dim light.

Keen Senses. You have proficiency in the Perception skill.

Sturdy Ancestry. You have advantage on saving throws against being charmed, and magic can't put you to sleep.

Trance. Your sleep is not like that of mortals. When you sleep, you can choose to send your mind into an “Elvish Dream” retaining full consciousness of your surroundings and you needn’t close your eyes. Four hours spent in such dreams acts on you as if you had rested an entire night.

Weapon Training. You have proficiency with the longsword, shortsword, scimitar, shortbow, and longbow.

Desert Nomads. You are resistant to fire damage. You only require the normal amount of water a day while traveling through a desert, rather than double the amount.

Dancers Beneath Innumerable Stars. When you use the dash action, difficult terrain doesn't cost you extra movement on that turn. Furthermore, when traveling long distances, you ignore the effects of difficult terrain — so you always move at full speeds.

True Astrologists. While you rest during a long rest you may gain temporary insight into the future. You may take advantage on one attack roll, saving throw, or ability check. You may take advantage after you see your roll but before the DM has announced whether it has succeeded. Once used you can’t use this ability until you take another long rest.

Nomadic Foresight. The Pol-Muyyaqar have grown so used to the patterns of the world that they, though they have never left their homes, may tell what has passed and what is to come in far-flung places. You may use a DM's Inspiration in three other ways: you may use it to reduce one point of exhaustion, to gain one point of Hope, or to choose to have rolled a natural 20 while attempting an ability check. If you use the last option, then you must pass a DC 15 Constitution Saving Throw. If you fail, you expend one Hope Point.

Heirs of Is-Isil. All the upturned pyramids of the Tentyric Kings are open to you, if you wish them so.

Beset by Woe. While hardier in spirit, despair can still threaten you. And its effects on the psyche are violent. If you suffer the Miserable condition, then in addition to its usual effects you suffer disadvantage to your Charisma and Wisdom saving throws.