They were the first to arrive in the Orridental, and are the chief enemies in Juraedon's war efforts. They live in the Near East, along the waters of Dur-Sharrukin. Their stature is of medium size. A stout build. A haughty and noble face, a sloped bridge and nose, thin lips, and white teeth. Naharaim eyes are black like pitch, except for the white pupils, complexions vary between pale and swarthy. The beard the men grow is thick, full, and often curly. They are often braided and inlaid with gold or other metals. Their hair is grown out long and also braided. Their ears are pierced or stuffed with a round object. Their race is a scientific one, and they are obsessed with efficiency and improvement.

It's believed that the Naharaim and Parasquen were once part of a greater clan, joined with the Pol-Muyyaqar, but separated after their assault on the gods.

The Naharaim are a mysterious culture of science, maths, and machinery that live in the near-eastern regions of the world. Their empire is called Atoraya-Kaldea, named for the two great peoples that populate the country.

They are of medium size and have a stout build. Their eyes are black like pitch, and complexions vary between pale and swarthy. Some Naharaim have ashy blue skin like their southern relatives, the Parasquen. The men grow long, thick, and curly beards. Often they'll braid their beard hair and decorate it with golden rings or other metals.

Their war efforts are carried out mostly by spider-like machines, or golem-like machines piloted by the Naharaim. These machines use steam as their power source, and, while terrifying and strong, can still be destroyed with effort by normal soldiers - no magic required. The Naharaim use these machines as substitutes for their own lacking population - in both numbers and military skill.

The Naharaim have never been a race talented for magic. They prefer the heat of steam, the pounding of sheets of metal, and the grinding of gears to the mystical arts. As such, they are a much more scientific people than the rest of the world. Of course, magic is a much more potent thing than technology, hour for hour learned - even the Naharaim admit this - but in some distant future these Elves dream that their steam and iron will surpass the ability to shoot fireballs from your fingertips.

In treating of the history, character, and influence of this ancient empire, it is difficult not to speak at the same time of its sister, or rather daughter, country, Parasquenisya. This southern neighbor and colony of the Atoraya-Kaldea Empire has shifted along history, and now its race, language, religion, and culture are almost entirely distinct from the country from which it emigrated. Nevertheless, the political fortunes of both countries were and are closely interwoven with one another; in fact, for many millennia, they formed one political unit - this was the time of the Masked Parasquen, a force of devastation and tyrannical fear. 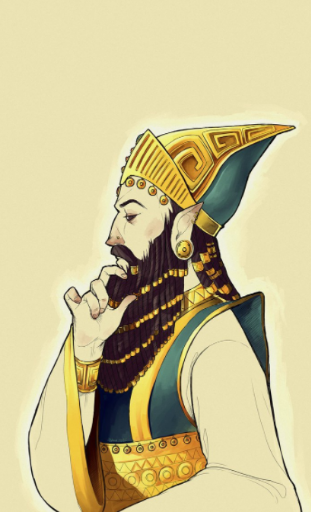 Skills: You are proficient with artisan's tools (Tinkerer's Tools).

Brass Armor: You are proficient with light, medium, and heavy armor.

Sister Kingdoms: You can speak, read, and write one extra language of your choice.

Languages. You can speak, read, and write Common (Parasquen) and Elvish (Local Dialect: Kaldean). Parasquen is a guttural, short syllable language that uses many natural metaphors. Kaldean is the dialect of the regions near Sha-Ur -- the Naharaim imperial capital.