The Naharaim relgion is fascinating and utterly alien from the religion of the Twin Western Empires.

There is the Naharaim trinity of Anu, Bel, and Ea. Anu is the father of of Bel and Ea. Bel and Ea are depicted as either male or female or androgynous - their sex is unimportant and always in transit. Anu is the Sun, as the sun's rays are like the clear light of reason, Bel is Maths and Ea is Geometry, the two most important tools of a Naharaim philosopher.

Sprouting from Anu's head unbidden and fully grown was Imuru, who is Thought. Imuru thence ran from his family and flung himself into the Outer Void, which he copulated with and produced his children Substance and Accident.

From these (unchanging, as the Elven mind is long and slow to change) elements you derive the entire Naharaim pantheon. From Reason comes the world, and then the world produces the fruits of life and death.

But what is to be made of this, and how are the Naharaim affected?

It is clear, then, that from their religion is derived their most cherished cultural beliefs. The Naharaim are a scientific race, but they are a pious race, then, too, and all their efforts with brass, copper, and steam are so that they may approach the divine light of Anu.

Their machinery is maintained by the Order of the Bereshith and are considered holy relics. Though the Naharaim are not physically imposing, they would never dare to use their machinery in battle unless if it were for a righteous and distinctly religious cause.

The Hearts of Anu

Lastly, is their Enuma Eish. Their Hearts of Anu.

One enactment of their brutal laws with a sacrifice to a Heart of Anu as punishment can be seen in the following: "If the child of a courtesan or of a public woman come to know his father's house and despise his foster-parents and go to his father's house, they shall tear out his eyes and sacrifice them to the Enuma Eish, Heart of the Sun."

Indeed, having any body part of yourself being sacrificed to the Heart of Anu is akin to being damned forever. It is described in the holy text the Kufas Eish that to lose part of yourself to the Enuma Eish is to go:

It is said that those forced to give up a hand for theft, or a foot for cowardice, would rather remove these body parts preemptively and hide them so that they would not be dragged into the Naharaim version of Hell by their time of death.

The Hearts of Anu are many, and they wander the lands of Atoraya-Kaldea with a company of priests. An Enuma Eish is also present on any military battle, guarded by a cadre of the strongest brass machines the Naharaim have available.

Why the Naharaim should have such gross and crude contraptions (which they have invented and continue to propagate) alongside their more sublime beliefs about the ever-shining light of reason is a partial mystery. A primitive superstition, perhaps, is what encourages this brutal method of justice-keeping. But the great thinkers of Juraedon also recognize the taint of Gendûet's teachings, who was a teacher of the Society of Systems rather than the Society of the Individual. But the god's influence on the Eastern Elves has been covered before. 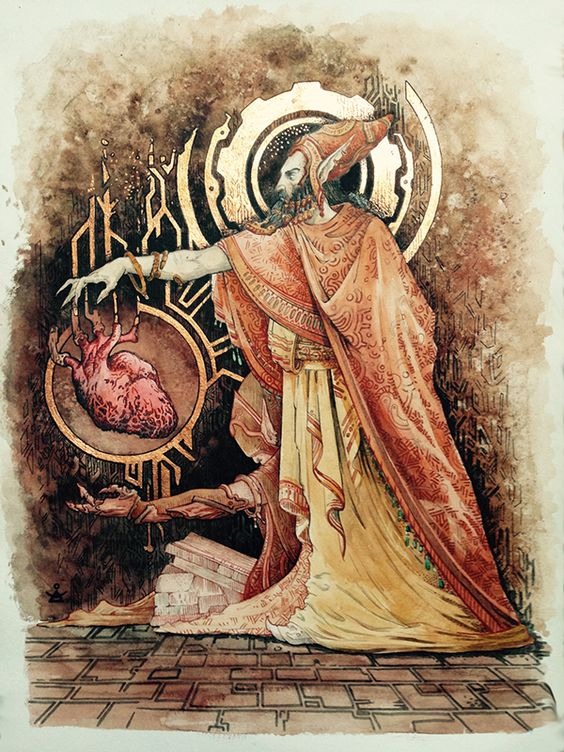