The Elves of the eastern continent Tizüb are called the Yeqitari. Yeqitari means 'The Unopened', as they were the races of Elves who betrayed the gods and did not repent.

The Orridental is a strange land to the east, populated by a myriad of Elves and nomadic humans. It seems that the Elves have not yet fallen into decay, and they rule vast kingdoms. As with all elvenkind, they have a fondness for the natural world.

The Yeqitari are the chief division of Elves within the Orridental. They are divided into many sub-races, united in history and a shared culture and trade network. There are five races of major note who dominate the continent; each of them have their own divisions, languages, and cultures.

The first mentioned among these are the Parasquen, who live mostly in coastal deserts. They have blue, ashy skins, and have dark eyes like their close relatives the Naharaim. Once their powers stretched over the continent, but they have since diminished. Now they are content in their white, clay cities by the sea, listening to the screams of the white gulls on the cliffs and shores.

The second, and the most populous and powerful, are the Yan. The Captain Visha and his wife, the minstrel Sheer, are of this race. But it would be a great mistake to think that the empires of the Yan are of one united people. The Yan themselves, that is, those who reside between the banks of the Dei He and the Yoo Nie are characterized by a large and tall size, a strong build, a round, full face, high cheekbones, a short, depressed nose, thick lips, and fine teeth. Yan eyes are black and often oblique, complexion varying between pale white and dark brown; the beard is black and scanty, Yan feet are small. There are many distinct peoples that are categorized as Yan though they have dialects and appearances that are imperceptible and strange to the Yan proper. The Yan proper is the dominant race in the eastern regions.

The Yan empires dominate the east, and their philosophies divide their peoples into extremes. In one, you will have a bureaucratic monster, the people mere cogs in a staggering machine. In another, you will find a people focused on the flow and form of nature, entirely given to unimpeded Movement.

The third are the Naharaim. They were the first to arrive in the Orridental, and are the chief enemies in Juraedon's war efforts. They live in the Near East, beside the waters of Dur-Sharrûkin. Their stature is of medium size. A stout build. A haughty and noble face, a sloped bridge and nose, thin lips, and white teeth. Naharaim eyes are black like pitch, except for the white pupils, and complexions vary between pale and swarthy. The beard the men grow is thick and full, it is often braided and inlaid with gold or other metals. Their hair is grown out long and also braided. Their ears are pierced or stuffed with a round object. Their race is a scientific one, and they are obsessed with efficiency and improvement.

Fourthly are the Altaic, and these are the ones closest in appearance to the Itie'lman. They are extraordinarily tall, and their skin pale and fair. Their hair is blonde or red and often long. Their features are bold. Their bodies are large and muscular. Their beards are often unkept but thick. They are the most reclusive of the Elves and the least numerous, and their collection of lore is little. They are strong and cold to members not of their race. Most of their people live in Illum, a city made of ice and crystal, glazed with frost, twinkling in the sun like a beacon of fire.

Fifthly are the Genunogora. In the West, they are the least known among the five races of the Yeqitari. They are a people whose history has been one of constant coagulation and then disintegration. They are known for their wisdom, frankness, and breadth of knowledge. They are a tall people, though not so tall as the Altaic. They are usually darkly colored, with hair either black or a darkish brown and kept long. Their faces are chiseled and proud, bearing noble, aquiline noses and opaque, deep-set eyes. Their collection of knowledge is great, and their places of learning are famed across the eastern continent. They are a strong people with a rich mythology and intellectual culture. Their lands are in a warm clime. They are divided into five great groups, divied according to the isle on which they live in the southeast of Tizüb, or whether they live on the mainland.

They are a unique people in that they discern a person's moral worth according to their status of birth, and have instituted a caste system in which all members born of their race must take part. This caste system, among Men a social construction, has taken on a biological form in the Genunogora, and so the poverty-borne among them have somehow become truly stupider and meaner than the fairer, more beautiful and intelligent upper-class. 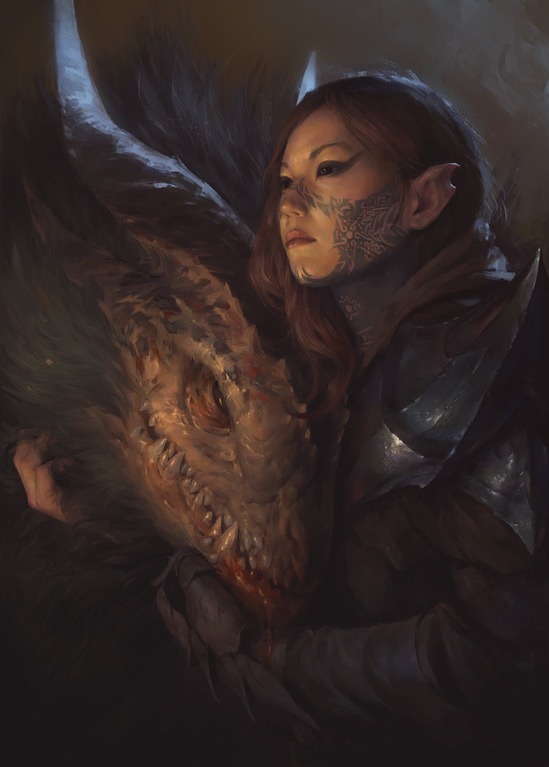 Anyhow he cannot take in a scientific sense that queer perspective that leads up to the primeval pagoda of the first Sons of Heaven. He is the real antipodes; the only true alternative world . . . and he is after a fashion walking upside down.
— The Everlasting Man