A hardy people that were wiped out, either by Vampires or their own self-destructive wars. They were a militant people, blessed with great physical strength, and none could beat them in melee combat. But still they declined. Now they are gone.

The Eçé were a handsome people, once very populous and with many distinct physical attributes in their ethnic sub-groups. But in general, they were a shortish people, shorter than even the Men of our own age. They had fair green skin, and their teeth were small and sharp, so that their grins were fearsome. The Eçé were also born with small nubs on their foreheads that would later grow into long horns that curled astride their temples. They were naturally muscular and strong, and their limbs were long, and their eyes were grey. As with all Morgondi, their ears were long and tapered at the end.

The War Chiefs of Huraedon

The Eçé were the second most populous of the Forgotten Elf subdivisions, and were the most influential political actors in Lower Huraedon. They were the inheritors of the Black King Elwëdorf's empire, which fell in 101 Year of Nelqora, and remained important in the area for a millenia until the arrival of Azrübel in 1360 Year of Nelqora. After Azrübel's conquests, their power was forever broken. Their kingdoms were reduced to tribal enclaves clinging to the edges of the Nelqorana Empire. They would never forgive the Nelqorana, not though many thousands of years would pass after the Empire's fall; and the easterly Eçé held a withering hatred of Men in general—whom they would kill on sight.

Reeling from their losses to the Nelqorana, the Eçé retreated either to the eastern Forests of Color or into their ancestral caves of Vulga. The greatest majority went eastwards. They had many fortresses and powerful holdings there, while Vulga had little infrastructure left unmarred by war.

Those who went eastwards integrated with the other Morgondi tribes and became an altogether different culture and people. Indeed, the Quoth we know of today are largely a product of the mixture of their far ancestors and the fleeing Eçé. Poems such as the Lay of Falorn tell of the tall ancient eastern peoples, much taller than the heights of the Quoth today. And the ancient eastern Quoth had dark eyes, as mentioned in the 4th line of the Vahnka Vahna: ". . . and their eyes were dark." Though today they are always a light grey. These were all traits of the Eçé. The modern Eçé—what few remnants remained in Vulga two hundred years ago, at least—remained similar to their ancient descriptions. So the Eçé that went east disappeared from history as a distinct people.

Those that went into Vulga became xenophobic and mean. Their flight had ruined their political and social structures. They were reduced to primitive tribes ruled by strongmen. Most of their rulers had been killed in the wars with the Nelqorana, and there were very few Eçé left. Also to add is that only the most wild-hearted or the most mean-spirited of the Eçé went into Vulga. It was a hard land, and loved only because of its ancient history. So those who went there were either of a bold and noble camp, hoping to refound a better age in an old place, or a cruel one, pining one longing for lost times that never really were.

But the Elves in general are a hardy lot, and the Eçé were no outliers in that regard. After the Sundering of Nelqora and the Fall of the Empire, the Eçé quickly moved to establish their own states in Vulga. They enthralled the Lorwen and appropriated their fortresses for their own uses. The many states of Vulga then began a protracted conflict lasting about three centuries. After much bitter fighting, the Green King of the Woods Açras ended that conflict and united most of the feuding states into a single kingdom.

Unfortunantely, Açras enjoyed his kingdom for only a few decades. Hod the Great was beginning his great campaign and in a few years swept the Vulga valley and killed Açras as he fled his castle. The Lorwen were given governance over the Eçé, and the Eçé of Açras's clan, the Açraglis, swore vengeance against Hod and his kin. Many of these clansmen attempted assassinations against Hod and his family. They were successful many times. They poisoned the Emperor's wife and killed his second son, and they also struck down a few other members of his household. But their efforts only drew Hod's ire and encouraged him to violently repress the general Eçé population.

With the death of Gavan the Builder and the later dissolution of Hod's Empire, the Eçé hoped to again be free to reinstate their old kingdoms. But the Lorwen remained powerful, and kept the Eçé in thrall.

The Destruction of the Eçé

As the years waxed and the Earth grew old, the Elves declined bodily and politically. And though all the Elves declined equally, the relative strength of the Eçé—being now the smallest and weakest of all the Morgondi peoples—meant that they were especially hurt by Man's encroachment of their territory. The great Laurem forests of Vulga were also dying. When the greatest of these woods—the Ae Aewere—finally dissolved, the Lorwen retreated into their caves, and their political dominions disintegrated. Humans moved into Vulga and began to establish their own kingdoms.

All the while the Eçé were being drawn here and there like leaves on the wind, with nowhere to go or to rest. Many of them went with the Lorwen, and joined that people as their ancestors did with the Quoth long ago. There was no strength left in either to fight for old matters of vengeance. Still others became nomadic, and traversed the great valley hunting and gathering what they could. To the Men of Vulga they became the stuff of myth: pale, horned spirits that wandered in the twilight, singing with soft voices with the setting of the sun, and quick to anger. The old ages of the fierce Eçé, warriors, lords, and tyrants, were now fully passed. They were in decline, and no effort could return them to their past glory.

This wearisome era lasted for a long while, about 1800 years. The Eçé watched the kingdoms of Man rise and fall as the tide, and though there were some that attempted reconquest—such as the ones by Turlin, Peçezn, or Tevinin—they were all rebuffed. Fortunately for them, there was little persecution. The Men of Vulga viewed these assaults as punitive attacks by God. They held the Eçé in both fear and honor. And though the Men would defend their land, they dared not to go out into the deep forests of Vulga and to find the caves where the Eçé made their homes. Regardless of regime, this belief stood solid throughout time.

The Eçé lived in this long decline until the arrival of the Vampires in about 700 Year of Huraedon, during the Blood Wars. The Black King Elwëdorf's death had shaken the spiritual foundations of Vulga, and many fell spirits had taken residence in the earth. But this was not realized and taken advantage of until a man called Elvira became the first of the Vampires, and many followed him. Vulga was shrouded in a black fog—a spell cast by the three Vampire Lords Elvira, Cruzinear, and Pelefinn—and the Vampires had free reign in the region. The first of their efforts was to exterminate the Elvish people, as they were not overawed by their terror.

Because not much is known of what happened in Vulga after the Vampires entered—no scholar of the Empire of Juraedon has entered that valley and left alive—much of the following is speculation, drawn from snatches of evidence collected by various Adventurers who have entered the valley and escaped.

It seems that the Eçé were entirely destroyed. They were forced out of their woods by terrible monsters created by the Vampires, and the land itself strove against them, becoming poisoned and unfit to survive off of. Then, the Vampires brought their slave armies and marched them to whatever holds the Eçé still held, spending many lives, and they killed any that they found.

The Vampires did much the same towards the Lorwen. But the Lorwen managed to fortify themselves in the greatest of their cave fortresses: Nellothrop, led by their King, Keán. So they survived.

But the Eçé were not totally destroyed. There is one left. An adventuring party from Frankonia reported that her name is Alshod Sildressi, and she is a Vampire of Cruzinear. 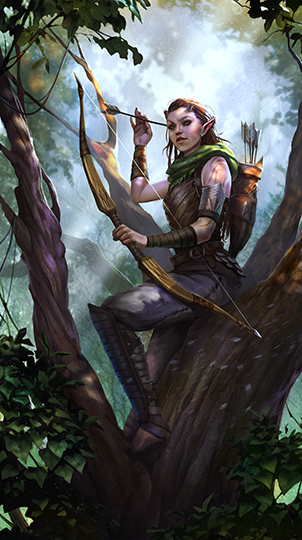 Age. You are an Elf of the West. You will live forever and are bound to the world, destined to dwell in it forever. Death only temporarily thrusts your spirit into the Halls of the Dead, and eventually you will return with memories intact.

Size. Eçé are about 5ft. 3in. Your size is Medium.

Darkvision. Accustomed to the twilit shadows of Vulga, you have superior vision in dark and dim conditions. You can see in dim light within 60 feet of you as if it were bright light, and in darkness as if it were dim light. You can't discern color in darkness, onIy shades of gray.

Warriors of the Forest. You have proficiency in either the Survival skill or the Perception skill.

Sturdy Ancestry. You have advantage on saving throws against being charmed, and magic can't put you to sleep.

Trance. Your sleep is not like that of mortals. When you sleep, you can choose to send your mind into an “Elvish Dream” retaining full consciousness of your surroundings and you needn’t close your eyes. Four hours spent in such dreams acts on you as if you had rested an entire night.

Weapons Training. You are proficient in the longbow, longsword, battleaxe, and glaive.

Savage Attack. When you score a critical hit with a melee weapon Attack, you can roll one of the weapon’s damage dice one additional time and add it to the extra damage of the critical hit.

Reclaim the Old Glories. Your body is bound to the ancient land of the Eçé: Ven Doni, Lower Huraedon. So long as you are in this region you can, for a brief time, act with the strength of the old heroes of the Eçé. You may choose to make all your turn's damage die deal their maximum damage. This effect ends at the end of your turn. Once you have used this ability you gain one level of exhaustion, and cannot use it again until you take a short or long rest.