There are three subdivisions of the Morgondi. The Quoth are the largest division and reside beyond the Vulga, living in their ancestral caves and towers in the Forests of Color. They have full lips, bold eyebrows, a short stature, and wavy, not curly, hair. They love tall and soaring trees. Most beautiful to them are those trees that turn in Autumn, and bloom full green in Spring. The Quoth often have darker skin, due to living, working, and playing on the tops of their beloved trees. They are still vigorous as a race in the days of old, though they number less, and there will continue to be less of the Qouth as their laurem trees disappear.

The Quoth have a High King, but this High King has almost no power, today. The Quoth no longer rule things that may be called kingdoms, and are rather divided among hundreds of small tribes.

There are four great woods which are densely populated by the Quoth. They are all in Eastern Huraedon. While those woods are shrinking, they still have most of the beauty they had in older days. These woods are Glortir, largest of the Forests of Color, and is ruled as the personal fiefdom of the High King of the Wood Elves, though he has little say in what goes on; Lorinand, a wood that stretches across the river Thronged; Velheln, which is, in general, the most open of the Quoth woods and many pilgrims visit it during the Spring; and Dwinorde, which is the smallest of the woods, and its dwindling has only increased over the years, and many Quoth are migrating outwards.

While Dwinorde is shrinking the most quickly, all the other Forests of Color are also disappearing. No one knows why. The laurem trees suddenly lose their potency and become like the regular woods that surround the Forests of Color. Then, very quickly, they whither.

The Quoth have many rituals and pageantries. Famed among them is the Wild Hunt, which is an act committed by Quoth devoted to devilsh gods. They transform themselves into spirits of the air and bark, and they surge outwards and destroy everything in their paths.

There are also the winter and summer solstices. Each is devoted to one of the two great goddesses whom the Quoth worship. They are Baradíl, goddess of the moon and stars, and Valdië, goddess of glory and the hunt. Valdië is commemorated during the summer solstice festival, which begins with a day of silence prior to the actual day. When the next dawn breaks, many trumpets and choirs herald it, and the ruler of the clan sets out their best foodstuff for everyone. The night is followed by more singing and the lighting and setting of many silver lamps, which are, after a hymn, sent drifting down a nearby stream or river.

Baradíl is commemorated during the winter solstice festival, which is done more privately and grimly. The day prior also has feasting and singing, but the day of the solstice proceeds in silence. At night, families gather in whatever halls they own, and they wait for the moon to rise to its highest point. Then, out of the moon's silver shafts the matriarch will squeeze out its light. She will proceed to pour the moonlight into a great silver vat. A crimson ribbon is dipped into the vat and then hung over the open mouths of the adults, who will have lined up prior. Large, silver drops, glittering and dark, then fall onto their tongues and allow them to enter a reverie. 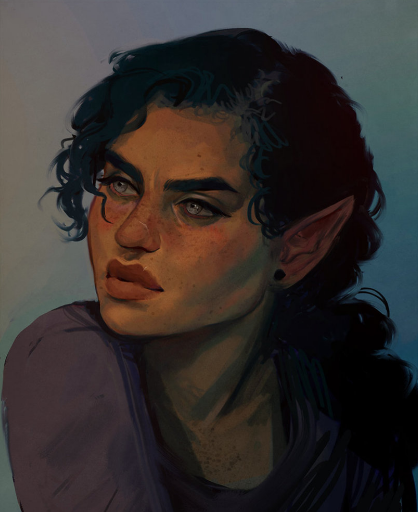 Green are the leaves I leave in Mirkwood.

Peace by the Laurem: If you are within the borders of a Forest of Color, then you are at home amongst the bright boughs and heavy crowns, and you travel at double your normal speed while traveling. Furthermore, while you are committing yourself to removing Shadow Points as a downtime activity, and so long as you are within a 1-mile distance of a laurem tree for the downtime's entirety, then for every Shadow Point you lose you may remove one more.

Weapon Training: You have proficiency with the longsword, shortsword, shortbow, and longbow.

Lovers of Trees with High Crowns: You have a climbing speed of 30ft.

Folk of the Airs: Your long jumps and high jumps do not require prior movement to reach their maximum lengths and heights.