The Elves of the western continents of Erub and Aran are divided into two great groups: the Morgondi woodland Elves and the Itie'lman civilised Elves. This article is written on the Itie'lman, which means 'the Blind'. The Itie'lman were among those Elves who betrayed the gods many thousands of years ago. They were blinded by the bright and holy light of Chesed, when an errant stone was thrown and broke her mask. Their history afterward was of many defeats, and many lost glories; more is spoken of the history of the Western Elves in the article on the Elves.

The Itie'lman have lost much of their ancient splendor. Their political power has been non-consequential for many years, due to their lacking population and increasingly weary sentiment — a sentiment carried on by their biological and spiritual character. But they are still as beautiful as they once were. Many might say they are still the most beautiful of all the races. And the Itie'lman's cultural impact on the world cannot be understated. Anything that may make the claim to have been produced out of civilized society in the west owes its gratitude towards the High Elves, fallen or no.

The Itie'lman may be divided into four historical groups. Three still exist, today. They are not internally solid units or blocks. Each has many different divisions, societies, cultures, and languages.

The Eresdolhn — the Undying — have always been, and continue to be, the most numerous and powerful division of the Itie'lman. Their ancient kingdoms once stretched across Lower Huraedon and reached over the Western Mountains. They enthralled the Morgondi, and Men were taken as churls. But in their current state of diminishment they have given up conquest.

The Eresdolhn are black or golden-haired. Their hair is thick and usually wavy or curly. Their complexion is usually pale brown, but ranges from an alabaster white to a more olive complexion. They have wide, bright eyes that are either blue, grey, or brown. Their noses are narrow and partly curved. Their statures are high, and their heads and faces are long. Usually muscular, the Eresdolhn are also of the slender build that is considered youthful and beautiful in Lower Huraedon, with narrow waists, broad shoulders, and long necks.

The second-most populous of the High Elves are the Pol-Muyyaqar. They occupy the central deserts of the Kingdom of Alk'kir. The Pol-Muyyaqar are all descendants of an ancient tribe called the Star-dancers, which was founded by the Tentyric King Is-Isil. The Tentyric Kings ruled the greatest of the Desert Elf empires.

There were once many tribes of Desert Elves, but today only the Pol-Muyyaqar remain. But as a general rule, the Desert Elves of the past are all referred to as the Muyyaqar, although technically they wouldn't all have shared in that clan's lineage.

The Pol-Muyyaqar of Alk'kir are darkly colored, ranging from a coffee brown to a black like jet. They have dark hair, usually black; those to the east have dark brown hair. The western Desert Elves have fleecy hair that tends to curl tightly, and the men and women alike braid their hairs into tight tails. The eastern folk have frizzy, thick hair that they grow down to their waists or feet. The Pol-Muyyaqar have wide, dark eyes, usually colored brown; though at night they become like bright, yellow fires. Their lips are full; some of their noses are lithe and flat and broad, others have bold noses slightly hooked; foreheads are full and those to the west have sloped foreheads; and cheekbones are tall. Their statures are high. Their extremities range from slightly gangly to perfectly proportional. They are light on their feet and don't impress on the sand. The Pol-Muyyaqar are also of the muscular and curvaceous build that is considered youthful and beautiful across Alk'kir, with strong hips, full chests, and long necks.

Once the most civilized and geographically spread of the Itie'lman, the Pirisqwik are now practically extinct. They were a composite people of the Piris, the invading ruling class, and the Qwik, the native Elves of Aran. During the conquests of Abayin, the Pirisqwik committed themselves to an abominable ritual meant to usurp the gods of the earth and to combine their minds into a gestalt. The ritual failed, and the Pirisqwik were turned mad. Their bodies were also cursed and diminished. They are now goblin-like creatures, threatening anyone who would dare trek through the Xâkëpû jungle.

The Eresdolhn tell us that the original Pirisqwik were mostly a dark-skinned race, suited to long days under the sun, and those who were more purely Piris were fair-skinned. All were black-haired, which was straight and thick. Their eyes were narrow and deep-set and colored either black, brown, or grey. They were of tall stature. Their noses were short and narrow and partly curved or hawkish.

In the Mythic Era, the Caládolhn had expanded over and ruled much of the Mountains of Das EkLachen and northern Greater Huraedon. In their Dissolution Period, after the coming of the gods, they were reduced to their enclaves in the Northern mountains.

They are black or golden-haired and pale-faced. In the darkness their wide eyes burn as if with yellow flames.

The Caládolhn were once a united clan with the Altaic called the Altresdolhn. They have a close friendship with the VolKernen of the Mountains of Das EkLachen.

The Caládolhn suffered great losses by invading Yeqitari led by Abayin during the Wars of Hate. They were further ruined by the encroachment of the Nelqorana during the Third Invasion of the North. The Ukallaba Azrübel claimed in his letters that he slew a million and enslaved a million more. These are no doubt exaggerations meant to awe the populace of Nelqora and assure them that the conquests would continue without issue. Nevertheless, the material damage was great, and many died. 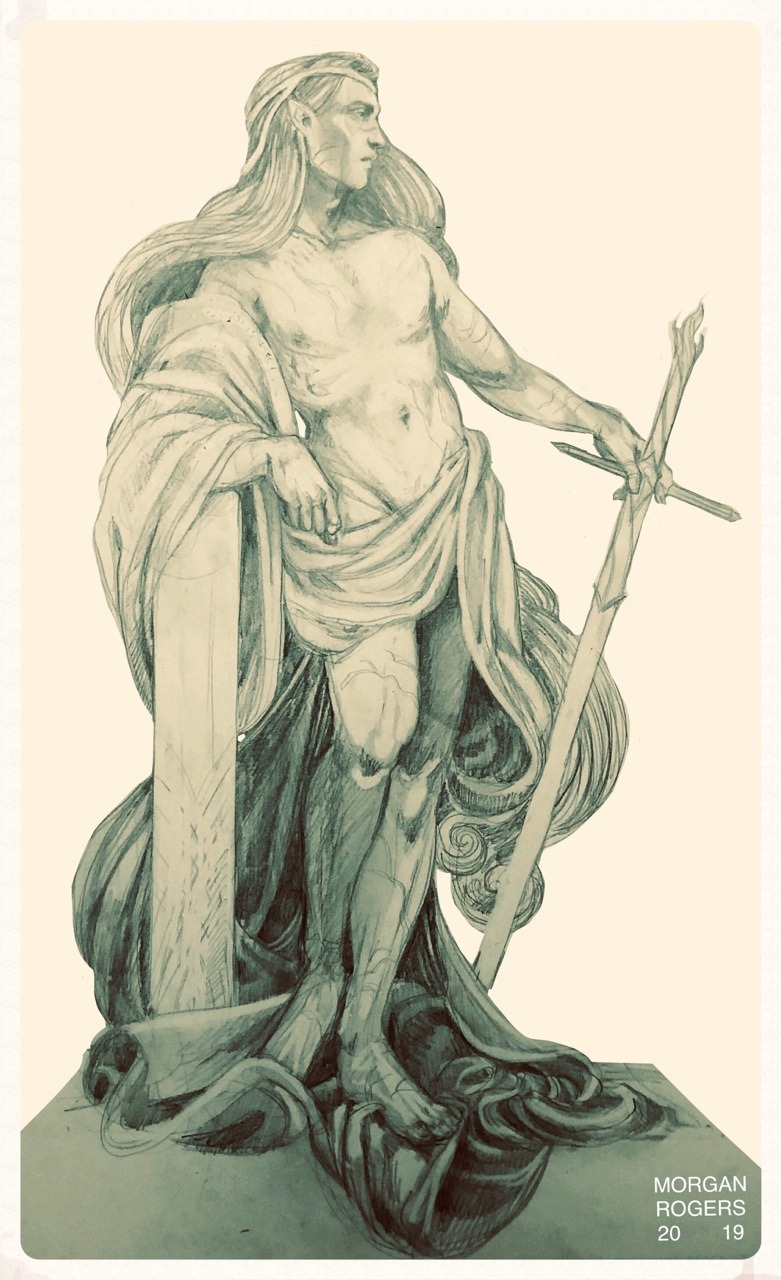 Long they dwelt in their first home by the water under stars, and they walked the Earth in wonder; and they began to make speech and to give names to all things that they perceived. Themselves they named the Quendi, signifying those that speak with voices; for as yet they had met no other living things that spoke or sang.
— The Silmarillion Ch. 3