Once Free and Lovely

Pirisqwik is the ancient name given to the people of Meldros, who led them through all their history. They were a race of two great divisions: that of the Piris, the true Itie'lman, and that of the Qwik, who composed the race's vast majority and were the native Ava'lman of Aran. The Piris were the ruling class, and swiftly established themselves in Aran through either conquest or diplomacy. Their swift establishment may be explained by their greater bodily powers, which were empowered due to their long time beside the gods; by their superior weapons; and by their political unity.

The Piris soon came to consummate with many of the Qwik, and the peoples mixed. But there always remained a large portion of the Piris who remained insular, and their blood was not diluted through many mixed marriages. They were the ruling class until their final toppling at the hands of Abayin.

In the time proceeding the Elvish betrayal, but prior to the invasion of Gevurah, the Elvish Golden Age was in full swing and the Pirisqwik flourished. They devoted themselves to statecraft and temple building. The jungles of Aran were tamed. The Pirisqwik rested easy in their stone temples and towers. Many stone monuments can still be found today from that far away era, rising out of the vines and jungle like struggling birds. They also made many roads which are still being uncovered by the Wizards of the Empire of Kilae.

But their industrious nature did not let them rest, and many of the Pirisqwik elite devoted themselves to metaphysical works. They hoped to harness the powers of the wind, earth, and fire, and above all: the ability to dominate wills. Their attempts at Black Magic soon bore fruit. They were contacted by Dim Beings of the Outer Void, birthed in a time prior to even the earth. The Pirisqwik elite were offered power in exchange for services, and for sacrifices.

And they accepted. Not because the Pirisqwik desired more material goods, but because always looming over their minds were the armies of Gevurah Seat of Judgement and his swarming millions of Yeqitari. The Caládolhn had been wiped out, and the Eresdolhn were faltering. The Pirisqwik were desperate and accepted a fell pact.

These living-gods ascended from whatever black pit they were made in and strode among the Pirisqwik as holy things, to be worshipped — and indeed they were worshipped, heartily and eagerly. By the time the Yeqitari reached the Isthmus of Isim the Pirisqwik had thrown themselves to their new living-gods. Daily they sacrificed hundreds on stone altars across their empire.

The ensuing war between Abayin's armies against the Pirisqwik's was a long and bloody one. And the living-gods were not false when they said they had great powers. They burned brush and soldier, and they set the earth trembling, and they threw thunder and lightning as weapons of war. But eventually, they were also defeated. Many fled deep underground and fell asleep.

When Abayin came to Valxphcti enthroned in silver and black, he did not know that a ritual of abominable order was being conducted. For Victi Meldros the Unconquerable had despaired, and he begged the greatest of the Living-gods, whose name is Vactechuatili, to help him conduct a ritual that should bind the Pirisqwik consciousness into the forest itself, and so they could strike the armies of Gevurah Seat of Judgement as the earth and stone and bark, indestructible and immovable. But Meldros was a fool to think that this ritual would save his people, for in Gevurah is the power to torture the very hills.

Regarding the ritual itself, it is not in the authority of a Living-god or an Elf to supersede the spirits of the earth, the Principalities, and any attempt to do so is folly. When Meldros cast his spell and sacrificed the lives of all his millions of citizens, willing and unwilling, he tried to thrust their swarming forms into the places where the Principalities lay. He succeeded in some places. But most Principalities rebuffed his spell. And the forms of his citizens were rebounded an uncountable amount of times between the focal point of his spell and the loci of the Principalities. When the innumerable cycles finally ended, and the spirits were returned to their bodies, the Pirisqwik had gone mad. And insane they are to this day, savage and fierce in the jungle of Aran. Meldros himself was turned mad as well. He wanders the interior jungles like a specter; a god of death to the natives.

Besides those rare, most powerful of the Pirisqwik able to resist the ritual's summons, the original Pirisqwik were destroyed. In a flash, an entire civilization was gone.

But the Pirisqwik corrupted — the Dark Elves — have since multiplied. Compared to what the Pirisqwik once were, they are shadows. They are stunted in height, and their skin is translucent and thin enough that you can see all their knotted and bulging veins. They are of ugly feature, and stupid. The entire race is broken, though they are still incredibly dangerous.

But among the Dark Elves there sometimes comes a rare birth. These rare children are not born insane, and their bodies are strong. They are called the 'Blessed', and are only born on portentous occasions. They are like the ancient Pirisqwik in every way except for their skin, which remains sickly and thin.

The Eresdolhn tell us that the original Pirisqwik were mostly a dark-skinned race, suited to long days under the sun, and those who were more purely Piris were fair-skinned. All were black-haired, which was straight and thick. Their eyes were narrow and deep-set and colored either black, brown, or grey. They were of tall stature. Their noses were short and narrow and partly curved or hawkish. Those with great amounts of Qwik blood in them had large nose bridges. Their foreheads were sloped. Those who lived in the northern, drier reaches of the continent had wide faces, with high cheekbones; those of the southern parts had long faces. Many of the Pirisqwik had narrow eyes. Their ancient forms still exemplify the beauty standards of the continent, which is a more thickly-set build that is still youthful, and therefore lean, with long limbs, broad shoulders, and thick necks. 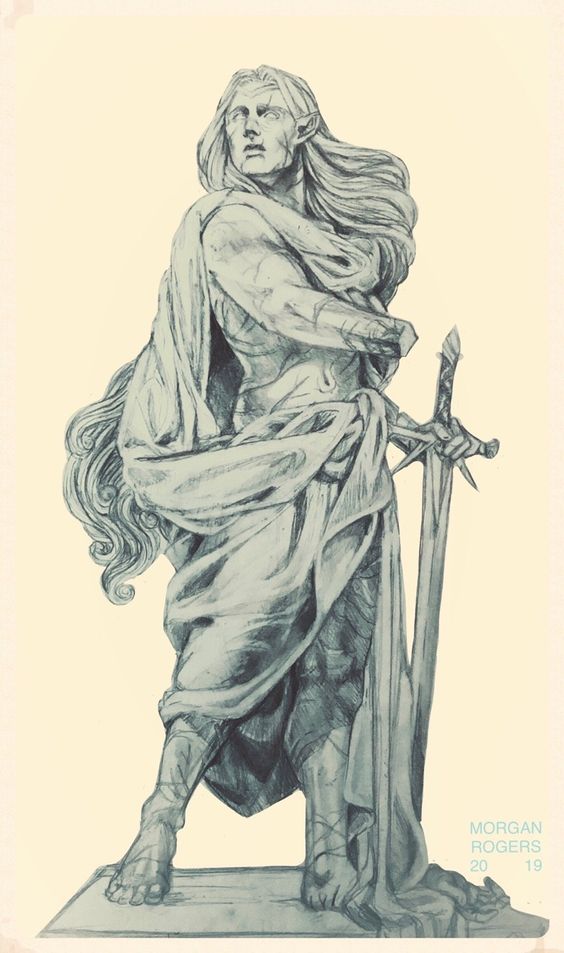 Age: You are an Itie'lman. You are bound to the world and live forever, but your spirit does not return to the world when you die, as with other western Elves.

Size: You are about 6ft tall. Your size is Medium.

Superior Darkvision: Accustomed to the dim underfoliage of the jungle basins, you have superior vision in dark and dim conditions. You can see in dim light within 120 feet of you as if it were bright light, and in darkness as if it were dim light.

Sunlight Sensitivity: Your skin is easy to damage, and sunlight harms you. You have disadvantage on attack rolls and on Wisdom (Perception) checks that rely on sight when you, the target of your attack, or whatever you are trying to perceive is in direct sunlight.

Elf Weapon Training: You have proficiency with blowguns, pikes, and halberds.

Elf Training: You have proficiency with the Stealth skill and the Perception skill.

Sturdy Ancestry: You have advantage on saving throws against being charmed, and magic can't put you to sleep.

Trance: Your sleep is not like that of mortals. When you sleep, you can choose to send your mind into an “Elvish Dream” retaining full consciousness of your surroundings and you needn’t close your eyes. Four hours spent in such dreams acts on you as if you had rested an entire night.

From Buttress Roots to Leafy Crowns, Here is Home: You are resistant to fire damage. The following is applicable only in the tropical jungles of Aran: you know the lay of the land and are comfortable there. You can forage enough food and water for yourself every day, so long as you spend one hour a day to do so.

People of the Earth: You are Pirisqwik: related to those ancient ones who had taken the matter of tree, stone, and air. So long as you are on the continent of Aran, you may try to invoke one of your ancestors. Describe the assistance you seek and roll a percentile dice. If you roll a number equal to or below your character level, your ancestor is summoned. The DM chooses the nature of this intervention. Its effects will be affected by your character's own powers, and the powers of the spirits invoked; you can expect greater spirits to be in hidden and ancient places. The assistance will be mostly in the form of cryptic advice; but in the case of greater spirits, it may come as a torrential force and display of natural power. You may only do this once per long rest.

Princes of Aran: You are Chosen among the Pirisqwik. You are a Prince of Aran. All Persuasion (Charisma) and Intimidation (Charisma) skill checks done towards a diminished Pirisqwik is done so with advantage.

Languages. You can speak, read, and write Common (Kilae), Elvish (Local Dialect: Pirisqwik), and one language of your choice. The Pirisqwik tongue is the far-spread language of the Dark Elves of Aran. It has evolved over the millennia and its usage is mostly among non-Elves, now. It is a stuttering language with many clicks.