The Living Gods of Eki-kruz

Many millennia ago, after the days of the gods but before the conquests of Nelqora, the kingdoms of the jungle basins worshipped beings who called themselves 'living gods'. Not much is known about them, except for what is reported by brave adventuring groups willing to work for scholarly patrons. It appears that these 'gods' took the forms of giant, anthropomorphic animals. They strode among their people, taking tribute and living lives of luxury. In combat, they were extraordinarily dangerous. These 'gods' ruled as kings and fought wars with the other 'living gods' of the jungle over territory and prestige. Many temples and palaces were built in their honor, and of their tombs, it is reported that the gods would have hundreds of other people buried along with them to accompany it to the afterlife.

There must have been dozens of these beings, but only four have been identified and found. Their names were Khon, Intijamil, Supaziite, and Qucha. It is difficult to explore the jungle, so research is slow on these matters.

The living gods were all found in massive city ruins, now inhabited by the dumb cousins of the Yuan-ti and other feral creatures. Some frog-folk have created tribes in the shadows of these ruins, but they refuse to enter them, saying that they are cursed by a great evil. The adventuring parties reported an immense amount of treasure and gold in these ruins, but they went through harrowing experiences to bring back a pittance of what they saw. Many adventuring parties never returned from their mission.

A Doom to Come?

The Grey Company, one of the most established and famed adventuring groups in the world, was the one to report on the existence and name of Khon the Jaguar. They also told the Explorer's Guild in Juraedon that they believed these 'living gods' - now nothing but vine grappled bone - did not seem so much as now dead, but were rather asleep. But this was nothing more than a hunch, and the matter was not explored much further. 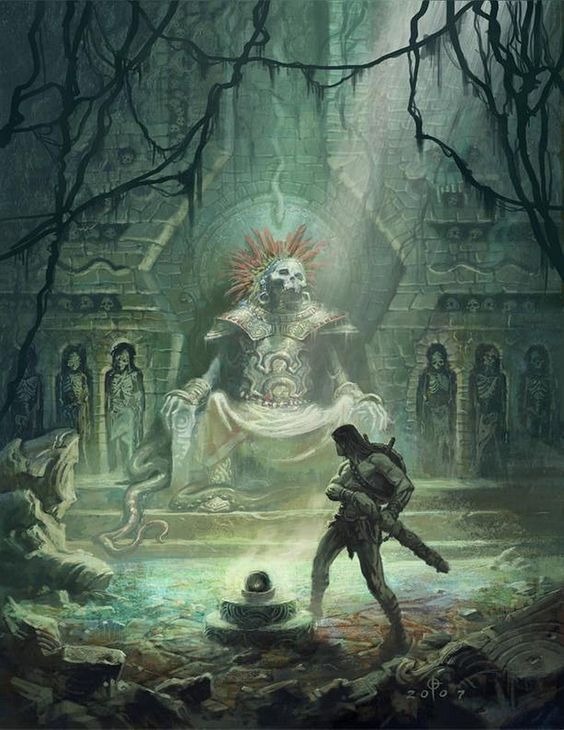