An ancient kingdom in the center of Liat. Founded nearly a thousand years ago as the largest human empire in the world, the kingdom fell into a steep decline in the mid-800’s. Queen Astrid took over from her father and led the kingdom into a new era of prosperity in the 870’s.

The king or queen rules with a royal council to advise on important decisions. Semi-autonomous powers have been granted to the local leaders of Hakon as part of the deal that led to the two nation's reunification.

Founding of Gameth King Cosmere Nestorious founded Gameth and its capital city of Gameria after years of fighting the kingdoms of the Myltev Islands and Southern Liat. Legends have it that Cosmere appeared on the dawntime horizon with a fleet of golden ships and soldiers, but scholars believe this to be literary embellishment from historians at the time. Gameria, an abandoned mining colony from the days of the Myltev Empire, was rebuilt and expanded into a multi-layered city designed for all classes. A golden age of art, science, culture, and commerce began under Cosmere's reign, and to this day many heroic fantasies and adventures are set during this time period.   Gamerian treatment towards elves Few histories of Gameth’s first century addressed the mass displacement and persecution of Liat’s elves. Prior to Cosmere’s arrival, elves could be found in all corners of the continent, with kingdoms controlling vast swathes of land in the south near modern-day Sardivelia. Cosmere’s conquests pushed elves north towards territory now known as Hakon, and thanks to this large population of displaced elves Hakon would remain independent for decades to come.   The Aurora Sisters (88 - 158) The Aurora era of Gameth’s history encompassed the reigns of all four of Stella I’s daughters. With a twenty-three age difference between children, their reigns covered over sixty years as Gameth formalized its borders and control over Liat. Tensions rose between Gameth and Myltev during this era, leading to some of the first written instances of Myltevian piracy in the 4th Cycle.   The Aurora Sisters (named so for the aurora borealis that occurred each time one of them was born) weren’t immune to intrigue and factionalism, each one fighting the other for supremacy over Gameth. Each of them drew their support from a different segment of Gameth’s empire: Gameth, Sardivelia, Avicenna, and Hakon. The youngest outlived her sisters by over half a decade, leaving each region in Gameth with a stronger sense of identity and self-interest.   Extinction of the Metallic Dragonborn Metallic dragonborn, after decades of resistance to Cosmere’s reign, were wiped out of Liat in the 150’s by Cosmere’s great-grandson Nestor I. The dragonborn gene pool was devastated, and small tribes barely managed to survive isolated in the Nestorian Mtns in eastern Liat. The wizard Asuria the Enchantress protested against the violent campaign, leading to her condemnation and banishment from Gameth by King Nestor. Some theorize the illness that killed Asuria years later was a poisoning done by one of Nestor’s agents. Today, humans and elves remain the only major races on the continent of Liat.   Reign of Penumbra I (186 - 221) A free-spirited leader who often frustrated her royal court by doing the exact opposite of what they advised, her reign was marked by several successful surveying expeditions of Pescaliat. A sailor named Paolo Piedmonte circumnavigated both continents in 199, and for a time the islands of Myltev were used as trading ports instead of hubs for piracy.   There’s even reason to believe that a handful of ships made it across the Largas Ocean to a mysterious continent known as Rana. Hudson’s Travels, a collection of traveling stories published in 203, said the region was full of ‘colossal god-like monsters'. Johnathan Hudson, the expedition’s leader, made it back to Gameth with only three members of his crew alive.   Ironically, Penumbra was lost at sea during a voyage to the Northern Territories on a quest to establish diplomatic ties with the Kiri and Kawa Clans of the region. A succession crisis ensued for the next four years, but her distant nephew Gibbous was eventually chosen to lead the kingdom. His first act as monarch was to end any further surveying expeditions.   Reign of Gibbous I (221 - 244) Gibbous I’s reign marked one of the only times in Liat’s history when the schools of magic and technology frequently collaborated to improve the kingdom. For a time Eldermere University in Oftin even had a devoted engineering department. Powerful spells became easier to cast thanks to alchemical formulae developed by Avicennan researchers. Is it any wonder that a wizard as powerful as Theo Faust was born during this period?   Reign of Stella II (244 - 273) Stella tried to follow in her ancestor’s footsteps by expanding Gameth’s borders, but she mistakenly believed that the Underdark was land worth conquering. Drow and duergar terrorized regions near modern-day Avicenna and the Nestorian Mtns while terrible monsters flooded through the Underdark portals into Gameth. Dark cults began to appear worshiping monstrous deities dating back to the Ostry Apocalypse, and it wasn’t until the Battle of Silverpass in 261 that the drow forces were pushed back into the Underdark and the entrances sealed off.   It would take centuries to close every Underdark portal in Gameth, but rumors abound of hidden portals in the deepest reaches of the Nestorian Mtns.   Reign of Meridian I (321 - 345) Meridian proved to be a tolerable ruler when it came to Theo Faust’s feats of magic, so long as he helped her court magicians research and develop new technologies. These inventions helped improve Gameth’s military, construct sturdier buildings in Gameth, and conquer the islands of Myltev to stabilize the region. Theo distanced himself from Meridian when she began an ill-fated campaign against Glace, leading in part to his missing decade in the 340’s. Some scholars presume that Meridian had an affair with Theo, but no records exist to confirm these rumors.

Reign of Celestia I (363 - 395) The last monarch to serve during Theo Faust’s lifetime, she remembered her great-grandfather Constell’s stories of Theo and called on him to fight the Sea God terrorizing Hakon. The nation went into years of mourning to memorialize the legendary wizard, but Avicennan forces in the east conspired to secede from Gameth in the meantime.   Thus began the Avicennan Divorce in 376, a violent civil war that left the continent of Liat divided for the first time since Cosmere Nestorius’ conquest of the region more than 350 years earlier. Wracked with guilt and depression from this defeat, she invested heavily into Gameth’s schools like Eldermere University in Oftin to compete with Avicenna’s technological innovation. She never shook the reputation of defeat, but her endowments to Eldermere helped turn it into one of the most respected schools in Pescaliat.   Reign of Gibbous II (395 - 461) One of Gameth’s longest-reigning monarchs, his reign was marked by a massive religious revival that consumed every segment of Gamerian society. Led by druidic priests and clerics from Hakon, this period of religious fervor was in direct response to Avicenna’s agnosticism and technological developments. This new religious movement emphasized the use of magic in everyday life and the sanctity of nature, two tenets that came to define the secession movement of the Hakon Dispute four centuries later.   Gibbous became senile later his reign, allowing zealots from Oakengaard to rule his court for years and punish their rivals with impunity. This alienated many members of Gameth’s merchant class in Gameria and the western port towns: any new factory or foundry built was labeled blasphemous if they failed to bribe the local priest. Gibbous’ great-grandson Constell II took over in the 460’s, expelling many of the die-hard members of the religious movement back to Oakengaard where they would denounce the Gamerian monarchy from afar.

Abdication of King Nestor VI After decades of mismanaged rule, King Nestor VI abdicated the throne in 874 to his daughter Queen Astrid I. Long presumed dead after her kidnapping, she returned to Gameria and claimed the throne for her own in the nation’s most dire moment. Serving for years as High Priestess of the Temple of Erivo in Hakon, she reunified the two kingdoms just when Gameth’s stability seemed perilous.   One of Astrid’s primary policy goals was to promote gender parity and increase the use of magic in daily life. Many government organizations were reformed, ensuring increased spell use and efficiency. Following the Avicennan War, research was done on how to create hybrid inventions of technology and magic.   Astrid’s reunification initially received outrage from the older Hakonians who still had the scars of the terrible civil war. High Priest Ove in Oakengaard was one of the most vocal critics, but once he was discredited as an Avicennan propagandist resistance to reunification began to lose steam.   Avicennan War Territorial disputes between Gameth and Avicenna led to all-out war in 874 between Queen Astrid and Gen. Boua Ussaki of Avicenna. The latter made gains in the western borders, but plans were disrupted when Gen. Boua was assassinated by a halfling named Sebastian the Character. An Avicennan naval assault of Oakengaard also failed miserably due to a kraken attack in 875.   Adm. Aldo Snaggletooth, the new leader of Avicenna, won skirmishes in the Nestorian Mtns., but his plans of an airship bombing campaign on Gameria were ruined when Gameth's Royal Knights Brigade destoryed his airship. Aldo was presumed to have died in the crash, but no body was found. The war ended when Avicenna's Interim Leader Idris was killed by Fairouz the Undying's Coven radicals and the town of Ravi surrended in 876. Post-war, the city of Ravi was claimed by Gameth and the island of Charybdis was granted to Sardivelia for its contributions to the Gamerian war effort.   Technological Progress in Gameth With the mining town of Ravi under Gamerian control, Gameth held vast resources to develop high-tech weapons and inventions. A large number of Avicennan researchers and engineers fled their home country to work on high-tech projects in Gameria like musketry, steamboats, and railroads.   A transcontinental railway was projected to be completed by the mid-900's, and the first rail system connecting Ravi to Gameria was completed in 895. The airship program intended to combine Theo Faust’s powers with the airship designs from Avicenna was put on hold when Theo’s left hand went missing without a trace in 889. Airship research continued, but at a slower rate and would take decades to finish development.   Gameth's technological advancement ran into several obstacles, most notably from a new generation of Hakonians fearing the harmful effects of these new inventions on Hakon's ecosystem. Spurred on by groups like the The Knights of Yo-Na, Queen Astrid was forced to accede to Hakonian demands and ensure that proposed technological projects underwent a rigorous review by an independent council of environmental experts. The reforms helped modernize Gamerian government and democratize the kingdom in ways similar to that of the Treeleaf Union and Broggfey, but the nation's technological innovation was significantly impeded by the moves.   By the start of the 4th Cycle's tenth century, Gameth was once of the most influential kingdoms in the world. Its adventuring group the Royal Knights Brigade had successfully defeated The Sunken God, and diplomats like Roland Fireheart helped forge goodwill for Gameth around the world. More than any other nation in Pescaliat, Gameth appeared well-placed to reap the full blessings of the new century. 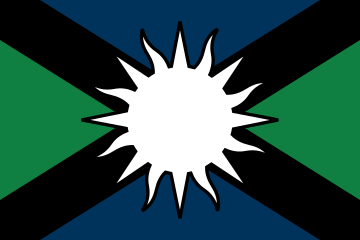 Let None Be Forgotten