The legendary adventuring guild first founded in the kingdom of Gameth. Over the decades the RKB has fought countless monsters and agents of chaos, like Fairouz the Undying and the Sunken God. In the early 920's it merged with the Gilded Hecat Guild to pool resources and become a fully international adventuring network.

The department head of the Royal Knights Brigade reviews intelligence from Gameth's defense ministry to determine rising threats to the kingdom that should be handled by the RKB. The king or queen of Gameth reserves the authority to override the department head's decisions and will sometimes task the adventurers with assignments directly. Now that the RKB is under the control of the GHG, these activities are performed by the leader of the GHG.

After several betrayals and the revelations of dual loyalty, former RKB alum Roland Fireheart drafted an oath that all RKB adventurers must swear in order to serve in the prestigious organization.   The oath reads as follow:

"By Erivo's blessing, I am a knight in the service of Gameth./
By the Queen's grace, I serve to defend Gameth and its allies./
By my role as knight, I will slay all undead and aberrations./
By risk of my livelihood, I will have no other masters before the Queen./
As Erivo was forged by the Ageless to defend Liat, so I am forged by the Queen to defend the this kingdom."

Those who fail to follow its tents will be faced with extreme punishments and may even be banished from the group altogether. This oath has been adapted to accommate the more diverse membership of the GHG and its lack of loyalty to any one specific kingdom, so any references to Gameth and the Queen have been replaced by mentions of the GHG organization and its leader. After an extensive lobbying effort on the part of Rakka's religious authorities, the oath also now specifies that adventurers will slay all 'fiends, undead, and aberrations'.

To fight for and defend Pescaliat, no matter the quest.

In the year 873, Gameth was threatened by an expansionist neighbor to its east and monsters ravaging the countryside. Amidst this chaos, the Gamerian defense minister Fallworth Lockmere took matters into his own hands and formed a band of adventurers to combat these threats.The group consisted of a paladin with a tragic past, a druid searching for her missing sister, and a driftless ranger looking for a good time. Together they managed to fight back the Court of the Undying and put Queen Astrid on the throne of Gameth.   The RKB's membership changed with the years, but usually a team of three to five adventurers would travel the countryside or beyond to fight foes like Fairouz's Coven or Avicennan armies. One of the group's crowning achievements came in 876 during the Battle of Faouzia when they prevented the lich Fairouz the Undying from summoning a monstrous deity known as the Orange King to the material plane. The battle cemented the group's status as a vital part of the kingdom's military, restoring its reputation after a couple years of unsuccessful missions and a dalliance with a thieves guild known as The Handgun.

For much of the group's history the rules surrounding RKB membership were less than formal, allowing for an odd assortment of characters to join and leave of their own free will. One ironclad rule, the Aldo Amendment, forbade members of the RKB from taking monetary or material gifts from non-Gamerian factions. In its half-century history, the rule has only been broken twice.   In the late 890's the RKB's greatest challenge came in the form of the Sunken God, a monstrous deity terrorizing the Elflands Empire with ambitions of conquering all of Ekal. The group's main adventuring party traveled to the Free State of Thorvald to obtain an item that could defeat the Sunken God, and together they infiltrated the Elflands capital of Kassædeia to defeat the beast once and for all. Many adventurers lost their lives during the journey, including the son of veteran adventurer Catriona Quinn and several members of the ship crew escorting the RKB to the Elflands. Finally in the winter of 897 the party arrived in the ruins of Kassadeia and defeated the Sunken God in a battle of epic proportions, containing the monstrous deity inside a magic item known as an Iron Flask obtained in Thorvald's capital of Grettir.   With the defeat of the Sunken God the Royal Knights Brigade became international celebrities, lauded as Pescaliat's greatest heroes. Many nations raced to form adventuring groups of their own, and Gameth became a leading global power for chartering and supporting the RKB during their quest against the Sunken God.   Helena Lockmere, a studious bard and former member who journey with the RKB on their mission to the Elflands, used her experience gained out in the field to be promoted as the next director of the organization's operations. Seeking to modernize the system, she purchased the Thousand Faces tavern in Gameria and turned it into the headquarters for the Royal Knights Brigade's vast team of heroes. Veteran heroes like Beleren Hazid and Kacie Whately worked to train a new generation of fighters and adventurers, and being only a few blocks away from the Astral Palace meant that RKB members would always be available for Gameth's rulers. In the years following her rise to power, Helena would oversee an adventuring force numbering in the dozens as people from all walks of life sought fame or fortune.   Despite legendary successes in the 4th Cycle's ninth century, the RKB faced several roadblocks for its adventurers in the tenth century. Gameth found itself riven by conflicts between its newly-annexed territories from Hakon and Avicenna, and more often RKB adventurers found themselves quelling unrest in the countryside rather than fighting interplanar threats to the global order. Some RKB heroes were lucky enough to fight rogue pirates in Myltev, but many felt their skills were being put to waste by a kingdom that had turned insular in the last couple decades. Helena did her best to keep the adventurers in line, but many were willing to risk everything at even the slightest whiff of danger.   After a heroic raid against the Myltevian Lead Kings ended in tragedy for a fresh crop of RKB adventurers, Helena saw the need to expand her organization's expertise and zones of operation. Coinciding with a weak moment in the Gilded Hecat Guild's leadership, Helena helped to succesfully merge the two adventuring guilds together so that adventurers would be allowed to undertake missions throughout all of Pescaliat. Restrictions still applied, especially in regards to the prohibition of dual loyalties or conflicts of interest, but by 923 adventurers were allowed to peacefully travel between the the guildhalls of Dhyrlonis and Gameria with ease. There'd be differences to overcome in regards to the cultures between the two guilds, but Helana and Xa'kara both appear committed to fostering the best generation of adventurers possible.

RKB Members, Past and Present 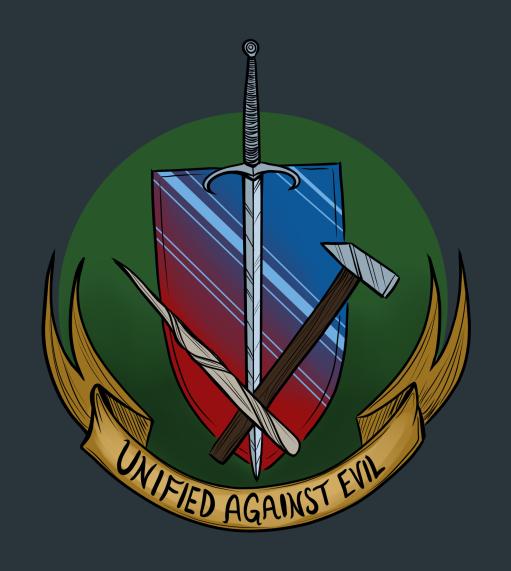 They Call As They Beckon You On, They Say Start As You Mean To Go On