A halfling sorcerer and former member of the Royal Knights Brigade. Raised in the bardic capital of Noggin, Sebastian took to the stage as soon as he could walk. In a career spanning decades, he became renowned for his versatile acting style and his performances that impressed even the Elflands royal family. His acting career was put on hold, however, when the leaders of his theater troupe accused him of killing the troupe’s director. A band of actors in the troupe had poisoned the director the night before, but this was the excuse they needed to expel him from the group.

Looking for new work to fund his vendetta, Sebastian put his talents with spellwork (always helped for putting on a show) to use as a member of the Royal Knights Brigade. For a year he ventured around Liat, fighting Fairouz the Undying's so-called coven and interfering with Avicenna's war effort. He finally got in 875 when he managed to kill the actors who kicked him out of the troupe, but in a show-stopping finale Sebastian chose to end his life five minutes later by killing Avicenna's leader Gen. Boua and her leading officers in a suicide bombing.   Sebastian's dramatic death became a rallying cry for freedom fighters and a warning of the power sorcerers had to reshape the world. A band of anti-imperial rebels in the Elflands used his likeness in their battle against the empire’s oppression in the 890’s, calling themselves the Characters and using bottles of milk as calling cards (the halfling's drink of choice). In 901 Thea Wildheart named her critically-acclaimed tome on the history of sorcery after Sebastian. 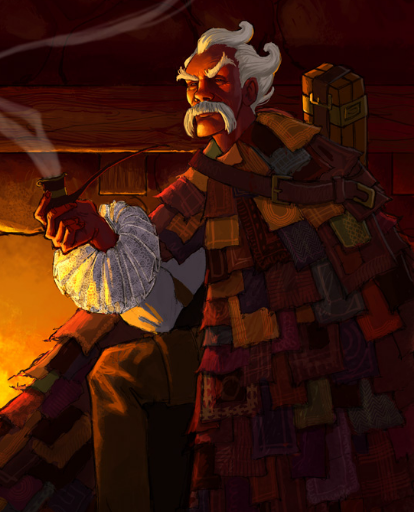