The supreme deity of Ekal, all gods and goddesses of the world operate their churches with their blessing. Legends have it that they created four deities to protect the continents of the world: Seevo and Erivo are two of them, the other two are said to protect continents far beyond the lands of Pescaliat.

To protect the world of Ekal and condemn evil religions.

The Ageless One was created by the gods and goddesses of Ekal in a desperate measure to fight back the monstrous deities of the Ostry Apocalypse. Imbued with the will and blessings of ten thousand deities, The Ageless One took the physical form of a 500-ft-tall knight in silver armor and banished the monstrous deities back to the Far Realms with one devastating blow. This attack reverberated around the world and turned central Pescat (the epicenter of the fight) into a vast desert wastleand that stands to this day as the Campanel Desert.   As the defender of the world, the mortal survivors of the Apocalypse flocked to the Ageless One's faith and created temples in its honor all over Pescaliat. To maintain a physical presence on Ekal, one mortal would offer up their body to serve as the Ageless One's avatar every century.   Out of respect for the deities that summoned it into existence, The Ageless One allowed minor faiths and religions to flourish so long as they maintained lawful codes of ethics and alignments. Deities that valued chaos and or acts of evil like Lolth or Gruumsh were condemned and treated as illegal cults by the Ageless One's followers.

Followers of the Ageless One value peace and stability above all other virtues. Members of the Ageless One's faith understand better than anybody else the dangers that threaten Ekal from dimensions beyond their own, so they fight and pray tirelessly to push back against these dark forces. Paladins will fight fiends and aberrations and repel them back to their home planes while clerics will preserve the land through prayers and blessings to the Ageless One.   The Ageless One faith can be broken down into three main tenets:

Unlike many world religions, The Ageless One serves as both high priest and the object of worship in its faith. Serving from its grand temple in the holy city of Dhamma, mortal priests are chosen to lead the faith's temples in the world's great cities.   At the start of each century when the Ageless One chooses a new mortal to take on as their physical avatar, there's no logic or methodology to explain their decisions. Outsiders have been chosen in the path, but working in the priesthood helps a person's chances of ascension into the avatar state. Notably, almost every avatar chosen in the past four millennia has been either from the Elflands or the elven Kiri Clan in the Northern Territories. Mother Oda, the Ageless One's avatar for the 4th Cycle's tenth century, was the first human avatar chosen in more than 2,000 years.

A religious sect known as the Knights of Rarita was condemned by the Ageless One in the early centuries of the 4th Cycle. Known for their fanaticism, the Knights believe that no person should wield a magical item due to how these items and weapons were abused during the years of the Old Myltev empire. They confiscate or destroy any enchanted objects they come across, but after a scandalous run-in with some nobles from the Elflands the Knights' tactics were considered too extreme by a majority of the Ageless One's followers and exiled to a remote corner of the Campanel Desert. 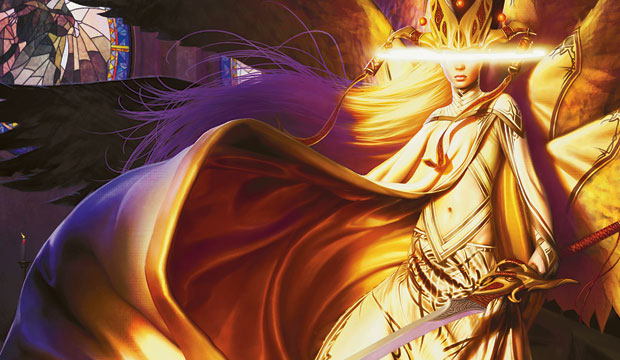 Out of the One, All