An arid kingdom in the southeast of the Campanel Desert led by a royal family of goliaths. Many dissidents fled here to escape political persecution in the Elflands, leading to decades of reforms that established a forward-thinking constitutional monarchy in this desert kingdom.

The monarch of the Rostami royal family serves as Sabha's head of state, presiding over every major religious and national holiday in the kingdom. A parliament is elected by a segment of the population (typically by merchants or city dwellers) to vote on and pass laws, and the nation's monarch stamps their seal of approval on any bill that becomes law.

In the centuries following the Ostry Apocalypse of the early 3rd Cycle, most of the Campanel Desert created by the Ageless One's final battle with the monstrous deities was uninhabitable wasteland. Only thri-kreen managed to survive the desert's harsh climate in large numbers as small trading posts and towns eked out existences on the desert's edges on the coastlines of the Arrayas Ocean and Karaga Sea. During the Elflands Empire's rise in the first centuries of the 3rd Cycle, many of the desert's small towns like Orem and Qazvin were annexed by the Empire as a final destination for ships sailing towards the Northern Territories. Despite the occasional yuan-ti assault or local insurrection, the region and its diverse variety of races was a peaceful part of the Empire for many years.   Modern-day Sabha had its greatest political shakeup after the Siege of Dhamma at the beginning of the 4th Cycle. The Elflands Empire called on a massive army numbering in the hundreds of thousands to push back the yuan-ti threat, including tribes of goliath fighters from the Toothless Mtns in the Empire's frigid east. After the siege's end and the defeat of the united yuan-ti forces, these goliath tribes settled in the cities of Orem and Qazvin and refused to return to a life of subjugation under imperial rule. They founded the nation of Sabha, and a war-weary Elflands was unable to wage another costly desert campaign to reclaim a few small towns on the Empire's periphery. A peace settlement was reached, and Sabha became the new homeland for goliaths all over Pescaliat.

For several centuries the goliaths of Sabha ruled the kingdom as an absolutist monarchy with little input from the region's thri-kreen or other races. The Rostamis, said to be the first goliath tribe to settle in Orem, was chosen as the kingdom's royal family and fought back against any signs of resistance with an iron fist.   The kingdom's regime slowly changed in the 4th Cycle's fifth century as political refugees fled to Sabha to escape persecution at the hands of Emperor Polonius III (435, 4th Cycle - 896, 4th Cycle) in the Elflands. A diverse band of radical free-thinkers challenged the political authority of Sabha's monarchy, pressuring the kingdom to reform and modernize in ways inconceivable back home in the Elflands. For years the protests were met with suppression and draconian punishments, but Queen Amaya Rostami (492 - 558) broke from royal tradition and chose to accommodate the demands of the political refugees. A weekslong political convention was held in the summer of 495, establishing a constitutional monarchy in Sabha with a democratically elected parliament and checks on the powers of the state.   Many of Sabha's neighbors balked at the political experiment, but in the intervening years the kingdom proved to be a sea of political stability amidst the unforgiving wasteland of the Campanel Desert. An invasion from the Elflands Empire in the 500's was quickly pushed back by a united force of goliaths and Sabhan natives, and apart from the occasional yuan-ti infiltration the kingdom experienced unprecedented growth and prosperity. Tahrir College became one of the most prestigious institutions for higher learning in Pescaliat, and the pearls harvested in Qazvin became the envy of every aristocrat with the means to buy one.   Sabha never completely mended its relationship to the Elflands Empire, but the two nations tolerated a shared border for several centuries until the collapse of the Empire in 897 during the Sunken God's Reign of Terror. A wave of refugees and elven nobility fled into Sabha seeking shelter from the Sunken God's reign of terror, an ironic twist of fate for many of the Sabha's natives. Queen Yasamin Rostami and Prime Minister Gregor Orangeoak made accommodations for the displaced elves, promising the kind of shelter and security that the Elflands failed to give to Sabha's founders. Even after the signing of the Treaty of Iverburg in 898 and the return of many refugees to their elven homelands, a significant faction of Sabhan natives resented the accommodations made to the elves and harbored a deep distrust of the ruling government for years to come.

This situation worsened when Sabha found its prosperity threatened by a brutal trade war with Sardivelia in the 4th Cycle's tenth century, Paoli Piedmonte seeking to subjugate the kingdom under an onerous trade deal like it had with the Lotan Conservation years earlier. A radical new generation of lawmakers was elected to the kingdom's parliament, more aggressive on the global stage and seeing conspiracies against their homeland at every turn. Under Paoli Sardivelia had grown into a global superpower, and Sabha wanted to be the kingdom that withstood its intrigues. 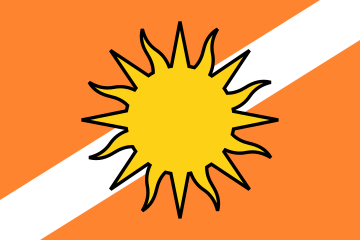 'Shining Through the Sands'