A member of the noble Piedmonte Family and leader of Sardivelia, 875 - Present. His family made their money crafting high-quality armor and bridges in Trecce, and he first became an influential figure duringLiat's fight against the Court of the Undying in 873. Having led Sardivelia for almost 45 years, Paoli proved a skilled operator capable of using neutral factions like the Royal Knights Brigade and the Handgun to his advantage.   He nearly lost his fortune trying to defeat his political rival Grego Vivaldi in 875 on Blue Monday, but he managed to win the other noble families to his side during the Festival of Drachma later that same year when it was revealed that Grego’s sister Cella was working for the lich Fairouz and her Coven. In 881 He consolidated his control over the other noble families on Red Monday in a massacre that left hundreds of nobles poisoned and dead.   He led his nation through decades of unprecedented wealth and expansion, annexing territory in the Northern Territories and Southern Pescat and funding expeditions to the continent of Rana. His overflowing coffers funded redevelopment projects in the ruins of Avicenna after the Avicennan War, and he revitalized the neglected trading posts of Craxi, Renzi, and Silvio.   Paoli ensured that Sardivelia filled part of the political void left by the collapse of the Elflands Empire at the end of the 4th Cycle's ninth century. After the defeat of the Sunken God at the Battle of Kassædeia in 897 he attended the Treaty of Iverburg the following year, convincing the other attendees to allow Sardivelia to seize control of cities destroyed by the monstrous deity's sahuagin horde like Oridelfa, Hedgpeth, and Galway in return for dumping millions of GP into their reconstruction efforts. He made similar deals with Oda Clan in the Northern Territories a decade later, annexing the profitable lumber town of Mokazai after the Oda-Kiri War. Seeing the way adventurers had reshaped world maps over the past half century, Paoli even chartered his own team of state-sponsored heroes known as the Avventuri to maintain stability and deal with his political rivals with a theatrical flair.    His decades of public life have left him a powerful and polarizing figure: his supporters call him the greatest politician of his generation while his critics call him a vengeful sadist with thousands left dead in his wake. His support helped fund the massive naval campaign against the Sunken God in 897, but that same year he ordered the extermination of the entire Rosso Family when one of its members tried to challenge Paoli's hold on power. Inhabitants of newly-annexed territories are granted more freedom than they ever experienced under the Elflands' tyrannical rule, but rumors abound of secret police kidnapping people in the middle of the night for a passing joke at Paoli's expense. 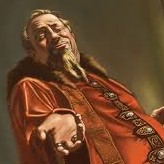