A merchant kingdom controlling much of the Pescaliat's around the Karaga Sea, this republic was founded by rogue merchants tired of Gameth's restrictions on trade. Sardivelians have traded in every corner of the world, and under Paoli Piedmonte its reach expanded even further in the modern era.

For most of Sardivelia's history, the major noble families would form power-sharing coalitions to distribute resources and handle crises together rather than wasting time on petty feuds. Under Paoli Piedmonte's leadership, this system was abandoned while many of the noble families become sidelined or outright eliminated.

The Dandolo (495 - 549) The Dandolo was a figure so well-loved and popular in Sardivelia to the point where every noble family has claimed him as one of their own at some point or other. Recent scholars have theorized that letters from the 480’s indicate that he was the bastard son of a member of the Capaldi noble family, a minor house that never led a coalition of its own in Sardivelian history until the appointment of Alessandra Capaldi as leader of the kingdom.   Regardless of his origin, The Dandolo was an inspiring figure who unified the feuding families of western Gameth into a unified bloc opposing the kingdom’s expensive wars in Southern Pescat. While King Constell II was laying the groundwork for an invasion of Rakka, The Dandolo met with every noble family in modern Sardivelia and forced them to swear loyalty to his cause using every form of intrigue imaginable. An overwhelming majority of families chose to join, those who refused were found killed or poisoned down to the last man.   By the time of Constell II’s death in 493 and Sardivelia's secession in 495, Gameth's government was unable to field an army strong enough to tamp down the unified force of Sardivelian nobility. The Dandolo, fueled by several supernatural pacts and relics, lived for over a century and led Sardivelia into a golden age of expansion and prosperity.

Every noble coalition afterwards attempted to recreate this era of greatness, but only Paoli Piedmonte has come within striking distance of matching The Dandolo’s influence in the region.   The Age of Sardivelian Expansion
Wealthy Sardivelian families financed shipping expeditions and the creation of trading posts all over Pescaliat. The Piedmontes, Grappas, Gentilonis, Rossos, and Vivaldis were the most prolific from this time and would have lasting influence in Sardivelia for centuries to come. Silvio (est. 523), Renzi (est. 526), and Craxi (est. 532) are the largest trading posts founded from this time period. Smaller trading colonies were either abandoned or attacked by suspicious locals, like in the Rakkan Rel-Odar Massacre of 528.   In 537 the families pooled their resources on an ambitious expedition east to establish trade relations with the kingdoms on the opposite side of the Largas Ocean on the mysterious continent of Rana. From a fleet of more than 250 ships and a crew numbering in the thousands, only a handful of voyages had made it to the mysterious continent and lived to tell about it. A storm was believed to have destroyed the flotilla, bankrupting the families and sending Liat into an economic depression. The noble families threw around the blame, becoming suspicious of each other and initiating an era of intrigue and distrust that would last for decades.   The Dandolo, losing his political acumen with age, failed to keep the noble families united and died in 548 at the age of 107. For the next few centuries Sardivelia would remain one of the wealthiest regions of Pescaliat, but the factional intrigues and power struggles of the rival families would diminish its political influence on the global stage.   The Vivaldi Question (549 - 588) Following the Dandolo’s death, the nation of Sardivelia fell into an era of suspicion and uncertainty that reached its low point in the Season of Slit Throats. To their credit, the Vivaldi family managed to defend many of the kingdom's trading posts in Pescat through a combination of ruthless negotiations and armed conflicts. Several of the trade routes leading into the heart of Pescat had to be forfeited, but Sardivelia held onto the major trading posts of Craxi, Renzi, and Silvio.   An uneasy sense of stability held sway over the land for several years, but the Vivaldis played its hand too far in 585 when it tried to invade the Northern Territories and reclaim Mokazai as part of its trading empire. The campaign backfired so horribly that the Kiri and Kawa clans collaborated for the first time in their history to repel a common enemy, laying the groundwork for the Kiri-Kawa Golden Age of the 600’s.   Members of every noble family saw an opening to seize control of Sardivelia in the wake of the campaign, igniting decades of violence and intrigue known as the Season of Slit Throats. This era of unprecedented violence began when Antonio Vivaldi (b. 519 - 588), longtime leader of the Vivaldi coalition, killed himself after breakfast one morning after a stressful summer of failed intrigues.

Grappas Coalition (836 - 875) Notoriously corrupt, the Grappas family oversaw a period of economic stagnation in Sardivelia while the nobility enriched itself off the backs of the lower classes. The corruption reached its apex in the 870's when Grappas family members openly patronized and met with evil liches and representatives of the Court of the Undying.   Holding a deep-seated grudge against the Grappas, Paoli Piedmonte recruited the assistance of a band of Gamerian adventurers to discredit the Grappas and enable his rise to power. The first phase of the plan worked perfectly when the adventurers crashed a Grappas-led party and revealed their dealings with the Court of the Undying. The second phase 875 proved more challenging after Paoli's naval reinforcements were sunk in a tragedy known as Blue Monday, but the Royal Knights Brigade tracked down the person responsible for betraying him and saved Paoli from Fairouz the Undying's assassination attempt.   Paoli capitalized on this success and convinced the Gentilonis and Rossos to unite behind him in a Piedmonte-led coalition. As Paoli was one of the last surviving members of his family's generation, this effectively granted him sole control of Sardivelian government for the forseeable future. He supported Gameth during the Avicennan War of the mid-870's, and after Avicenna fell into ruins during the Fairouz Terror he helped it rebuild and establish lucrative trade deals with the recovering kingdom.   Red Monday Exactly six years after the events of Blue Monday, in 881 Paoli got his revenge on all the royal families who bet against him during his rise to power. He invited all the royal families of Sardivelia to a banquet at his Trecce estate where he demanded that all the noble families surrender ¾ of their wealth to Paoli in recognition of his authority and leadership of Sardivelia.   Most of the nobility balked, and those who refused to pay were poisoned by the banquet’s wine. Only the ones who agreed to Paoli’s terms were given the antidote. Flush with funds and without any major political rivals, Paoli was able to steer the Sardivelian state in his own image. This included considerable investment in the trading posts of Pescat, the redevelopment of Avicenna, and even well-funded surveying expeditions of the Arrayas and Largas Oceans.   This success continued well into the 4th Cycle's tenth century, when Paoli capitalized on the chaos wrought by the Sunken God's Reign of Terror to eliminate rivals and expand his kingdom's territory to unprecedented levels. With the signing of the Treaty of Iverburg Signed Paoli doubled Sardivelia's territorial holdings by taking control of major Elflands cities like Hedgpeth and Galway, and with his chartering of the Avventuri he ensured that an RKB-style adventuring guild would always be availabe to defend Sardivelian interests. After half a century leading Sardivelia, his successor Alessandra Capaldi appears ready to continue Sardivelia's economic ambitions for decades to come. 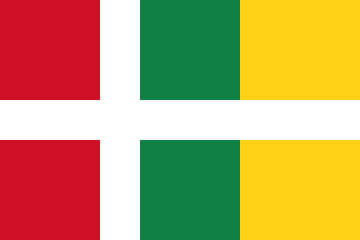