A nation of orcs and half-orcs in the central region of southern Pescat. Created by the Treaty of Iverburg in 898, Pescaliat's orcs were given a homeland of their own in the chaotic region of the Fey Plains that they vowed to tame and settle in the decades to come.

Under Broggfey's constitution, the President can serve two seven-year terms regardless of whether they're consecutive or not. Every town of more than 1,000 people has a representative in the nation's Assembly, where laws are passed in regards to settlement and governing of the Fey Plains.

The Sunken God's reign of terror in the Elflands Empire in 897 devastated dozens of cities, towns, and villages in 897, overthrowing 4,000 years of elven rule in southern Pescat. After the the monstrous deity's defeat at the hands of the Royal Knights Brigade in the Battle of Kassadeia, the nations of the world met together in the Glacian city of Iverburg to map out the shape of this new world, recognizing independence for some regions of the empire and allowing nations like Sardivelia and Bahamut to take control of others.   As the negotiations drew to a close, one man stood up with a missing eye and arm to vouch for the need of an autonomous orcish nation-state. Brogg the Accuser, having survived the fall of Thork during the Characters Revolution and the destruction of Galway during the Sunken God's reign of terror, attended the Treaty of Iverburg's negotiations as a representative of the orcish territories of the former Elflands Empire. Several nations scoffed at the idea of orcish independence: even though The Ageless One forced the orcs to abandon their evil deities like Gruumsh and Yurtus more than three thousand years earlier, many people in Pescaliat still viewed orcs as nothing more than savage warmongers would like to see nothing more than the destruction of every other kingdom in the world.   Sensing the opposition, Brogg explained why orcs were ready to govern a nation of their own. Luthic, orc goddess of fertility and the hearth, was a stabilizing force in orcish society that challenged her worshipers to live more civilized lives of hard work and self-improvement. Under the guidance of such a powerful deity, the orcs would accomplish what no other nation could in two thousand years: tame the Fey Plains and create a safe trade route for merchants moving from west-coast Pescat to the east. This proposition shocked the negotiators, many of whom hadn't even considered putting the Fey Plains on the table. Created in a failed experiment in a war between the Elflands and tiefling-controlled Rakka, for centuries the region was seen as nothing more than a dangerous no-man's-land where monsters from the Feywild terrorized those foolish enough to enter its borders. Settling such a chaotic land was a fool's errand, which perhaps explains why the other nations agreed to give the orcs control over the Fey Plains and its eastern border known as the Iron Path.   With the city of Thork as its capital, the newly founded nation of Broggfey set about a generations-long campaign to subdue the Fey Plains and turn it into the most fruitful lands in Pescaliat. Brogg the Accuser, old and weary from years of fighting the Elflands Empire, handpicked his political apprentice Nagrette the Victorious to lead the newly-founded nation and craft its constitution. One of the founding laws granted 50 acres to every orc family willing to establish a farm in the Fey Plains, both tempting and rewarding to those willing to take the risk. Orcs from all over Pescaliat, disenfranchised and abused by world governments, immigrated en masse to Broggfey in the hopes of a better life and land to call their own. by the end of the first decade of the 4th Cycle's tenth century, Broggfey's population had increased by more than 200% as thousands of orcs traveled into the Fey Plains. Many would fail and many would find wild success, but the process of settling this wild and mysterious region would take decades to complete. 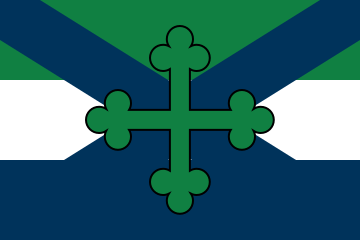