A large militaristic kingdom in the arid regions of Southern Pescat. Founded by tieflings exiled from the Elflands Empire, Rakka has become an industrialized nation with one of the world's largest standing armies. Built atop numerous portals to the Underdark, for centuries its military leadership was in near-constant war with the nation's rebel drow population. Once the conflict was resolved by the Treaty of Rel-Kadrar in 901, Rakka sought to expand its borders throughout the continent.

A military junta or dictator commands the nation, overseeing the nation's factories and barracks to optimize for total war.

The land of modern-day Rakka was an arid wasteland in the years following the Ostry Apocalypse, home to small tribes of aarakocra and goblinkin while packs of gnolls ravaged the countryside. With the founding of the Elflands Empire, tieflings were exiled to this deserted region under accusations of infernal corruption. A massive purge led by Emperor Fortinbras I (629, 3rd Cycle - 1186, 3rd Cycle) left hundreds of tieflings massacred in the elven capital of Kassædeia while thousands more fled south to establish the small kingdom of Rakka in the 900's.   Rakka's founding came in a moment of desperation, surrounded on all sides by rival tribes and gnollls eager to sow destruction among the tiefling refugees. Fighting for their survival, every man and woman was expected to carry a weapon and fight to defend the capital of Delmascar to the bitter end. By the start of the 2nd millennium of the 3rd Cycle, Rakka was a military powerhouse with the rival aarakocra and goblin tribes of southern Pescat subjugated under its control.   In the final century of Emperor Fortinbras I's reign the tieflings of Rakka were eager to expand their kingdom and avenge themselves against the Emperor that had banished them centuries prior. Thus began the first Elflands-Rakkan War in the 1100's, a bitter conflict that tore Southern Pescat apart and and created the Fey Plains in a calamitous final battle. Rakkan forces were pushed back and humiliated by the Elflands imperial army, retreating behind the Bahamut Mtns and enacting much-needed reforms to modernize the government and ban the practice of devil worship in the kingdom.

Tieflings were not the only race exiled from the Elflands Empire. The drow, a race of dark elves that had operated in the shadows as spies and assassins for the Empire, fought for supremacy against Emperor Fortinbras II (1633, 3rd Cycle - 2199, 3rd Cycle) in a decades-long cold war that left the capital city of Kassædeia a battleground by night. The war ended in 1714 of the 3rd Cycle, the drow banished from the Empire and forced to find a new land to call home.   Rakka's tieflings allowed the drow to establish settlements in the kingdom's east, showing solidarity with fellow victims of the Elflands' bigotry. For years this arrangement was peaceful and profitable for both sides, but as Rakka geared up for another war against the Eflands in the 2000's of the 3rd Cycle a rigid racial hierarchy took shape where the drow were forced to work grueling hours forging spells and magic items for Rakka's armies. Despite such hard labor, the drow were banned from holding positions of leadership in Rakka's government.   This oppressive arrangement reached its breaking point in the 490's of the 4th Cycle when King Constell II of Gameth tried to conquer the kingdom of Rakka. He pushed through Rakka's eastern fortifications, recruiting bands of aarakocra and drow to his side and promising them preferential treatment if they turned against their tiefling overloards. The aarakocra refused, but the drow graciously accepted this liberation and provided King Constell with powerful magic relics in his siege against the nation's capital. He died at the Siege of Delmascar in 493 of the 4th Cycle, but even after his forces fled Rakka the nation's politics would never be the same. The drow demanded autonomy from Rakka's oppressive regime, but the tieflings wanted the kingdom's old order restored as quickly as possible.   And so began the Rakkan Civil Wars, a series of bitter conflicts between the drow and tieflings that would rage for the next five centuries. The Verschow's dark elves fortified their settlements in the Underdark and turned eastern Rakka into a minefield of dangerous monsters and traps, sieges often lasting for years on end without a clear victor. Conflict with the kingdom's goblins and aarakocra had been avoided by providing them with permanent positions on Rakka's military council, but the conflict between tiefling and drow as too intractable to allow for a similar reconciliation.

Perhaps due to the simmering tension between drow and tiefling there was only one major war between Rakka and the Elflands in the 740's of the 4th Cycle, one that almost led to a tiefling victory as they besieged the elven capital of Kassædeia. The Elflands' superior numbers repelled the invaders and kept the city secure, but the war-weary Empire was unable to keep its provinces united as the dragonborn of the Bahamut Mtns rebelled to establish their own kingdom in 760's.   Despite significant defeats at the hands of the Elflands, Rakka's military class remained optimistic that the Empire would one day fall. The Elflands had been losing territory for centuries, and technological innovations life firearms were transforming Rakka's military power. The New Year's Massacre of 897 that left the Elfland's imperial family slaughtered and the Empire in shambles was the greatest blessing Rakka could have asked for, leaving the tiefling kingdom the most powerful nation on the continent. Some feared Rakka would collapse into a brutal era of civil war after Verschow asssassins murdered High Marshal Jalil Hafiz on New Year's Eve 900, but the Treaty of Rel-Kadrar signed three weeks later settled 400 years of feuding between the two nations thanks in part to heroic efforts by an elite time of Rakkan adventurers.   Under the leadership of Proserpine Hafiz, this new Rakka would now have dark elves on its military council and allow for a slow integration between the two kingdoms. Drow magic would be used to support the production of tiefling armaments while Rakkan industrialists would invest in the Verschow's infrastructure, making the kingdom stronger than it had ever been in the 4thy Cycle. A new era was dawning in Southern Pescat, one that would be Rakka's for the taking.

Infernal Heritage
In the early years of Rakka's history several tieflings exiled from the Elflands still worshiped devils and demons to obtain access to fiendish powers. This alienated the kingdom from many of its neighbors, and the first Elflands-Rakkan War was seen as a holy crusade against the fiendish forces who controlled the kingdom. After several humiliating defeats the Ageless One's followers managed to purge the kingdom of its devil-worshiping cults and found a new and more respectable religion in Rakka. Currently Tyr is one of the most popular deities in Rakka with his strong sense of justice and righteousness.    For centuries demonic and fiendish cults have been prohibited by Rakka's military, but some operate in the shadows and occasionally wield enough influence to shift the balance of power. Some notable cults include the Glasya's Defenders, the Daughters of Gehenna, and Yeenoghu's Destroyers. 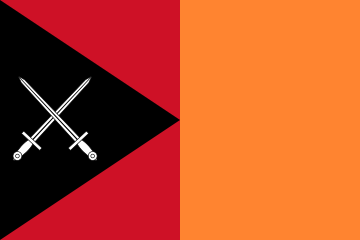 We are all for the Country, the Sublime, and the Flag