A tiefling preacher and veteran member of Rakka's Heroes. Faithful to the god Tyr, he helped the adventurers Seraphina Cedarroost and Xalix purify an office desecrated by fiendish activity in Rel-Avery. From the moment he learned of a devilish conspiracy in Rakka, Eli jumped on the opportunity to defeat these fiends and spread Tyr's good word.   He spent just a single week as an adventurer for the government-sponsored adventuring group, but he left a powerful impression on the group's legacy. With rousing speeches on the streets of Rel-Kadrar and a passionate hatred for all things fiendish, he led a crusade against the devilish forces corrupting Rakka's elite institutions like the private militia Regulated Steel. He helped the party kill one of the main fiendish collaborators Hedera, and even managed to strike the devil Naberius himself when he appeared to negotiate with the party.   After a week of adventuring with Rakka's Heroes in the winter of 900, a series of assassinations by drow terrorists on New Year's Eve left Father Eli as the emergency High Marshal of Rakka. Learning that the devil Naberius was plotting to incite a violent civil war between Rakka and The Verschow's drow to collect souls from both sides of the conflict, Father Eli used all of his emergency powers to warn the Rakkan people about the dangers of all-out war and the devilish conspiracy that had corrupted the likes of favorite sons like Sammal Najjar. He established a stalwart antiwar faction with support from a reformed Regulated Steel and the nation's network of Ageless One temples (the rumor mill churned out stories of his relationship to Rel-Kadrar's High Priestess Criella).   Rakka's military council emphasized Father Eli's temporary position as High Marshal through the weeks of unertainty, but Eli used every day as leader to his advantage. He traveled all across western Rakka and gave passionate sermons to audiences numbering in the tens of thousands, preaching against the devil's easy temptations. He used his political capital to assemble a band of adventurers to act as a peacekeeping mission to the Verschow, hoping to avoid total war and bring both sides to the negotiating table by eliminating Naberius' influence once and for all. When the Dark Souls returned from the Underdark with Naberius defeated and House Baudissin overthrown, Father Eli acted as the neutral third party overseeing the signing of the Treaty of Rel-Kadrar.   Once peace was established between Rakka and the Verschow Eli abandoned all claims to the position of High Marshal, working with Criella in Rel-Kadrar to keep the kingdom vigilant against the threat of fiendish activity. He oversaw a religious revival within Rakka, putting pressure on the new High Marshal Proserpine Hafiz to support the kingdom's religious institutions and search out any signs of fiendish corruption.

Growing up, Eli Anderson found comfort in the tales of old heroes and stories of the light of the gods. Despite his horns and tail, he felt that these words could let him connect to those around him. He filled a small prayer book with any tales of light and happiness that he could find, and whenever those around him began falling into despair, he would open his book and speak with words and stories of the divine. Hiding his horns under a large hat, he began his career standing on a small soapbox in the town square, taking offerings and trying to lift spirits. Years passed and even after revealing his horns, there were many who would continue attend his weekly, and later daily, sermons. Those who listened to him grew and spared what they could, until the mass was able to afford a small chapel. Even there in darkness, Father Eli and his congregation were a small light standing brave. Life, for a time, was alright.

But the darkness would seek to snuff out any light of hope in such grim hollows. Father Eli filling his humble chapel with the words of the gods, calling for justice and leading his small congregation away from the fires of the Nine Hells. But there were those who saw him as another devil or deceiver who decided that such evil must be stopped. And so the fires were brought to his chapel, wood burned, and people screamed for help, but none would come. After the deaths of his congregation and destruction of his chapel, shown that evil burned hot not only in dark but blazed in the hearts of all people, Father Eli "Duffy" Anderson decided to head out into the world to save those he could, to turn those he could from the path of evil. With a crossbow in his right hand, the holy scripture in his left hand, and the word of god on his lips, he stepped from the charred ruins of his chapel.   Tales have spoken of Clerics and Paladins, but Tales will be spoken...   Of The Preacher   -Credit to Ein 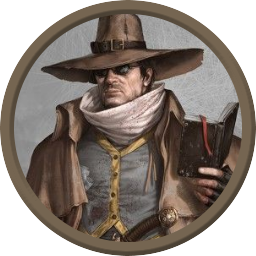