A halfling rogue and former member of Rakka's Heroes. Trained as a sailor on the coasts of the Treeleaf Union, she honed her swordsmanship skills at local thieves' guilds from an early age. After her captain retired she found herself still full of wanderlust, eager to venture and see the world. It wasn't long before she applied for a position on Rakka's Heroes, helping the group fight fiends and smugglers and forwarding intelligence back to her contact in the Union Josephine Elderberry.   In the fall of 900 she helped uncover a devilish conspiracy in the Rakkan city of Rel-Kadrar where a fiend by the name of Naberius was plotting to plunge the nation into a brutal civil war with The Verschow to collect souls from both sides of the conflict. She helped purge the tiefling militia Regulated Steel of any fiendish influence, and on New Year's day 901 she delivered the killing blow to Naberius' main conspirator Hedera.   After the disbandment of Rakka's Heroes Seraphina continued to travel through Southern Pescat, leaving on bad terms with her former boss Director Astara Hadad. She continued to forward any useful information back to Josephine, becoming a founding member of the halfling spy network THEM. She was last spotted in Poroshenko, chartering a ship for passage somewhere north. 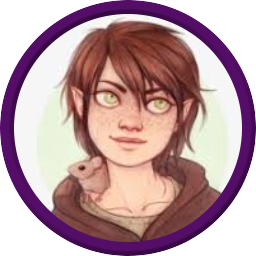