A criminal organization specializing in the theft and sale of magic items. Under the leadership of the dark elf couple Azrael and Verona de Noves they've all but cornered the market the enchanted relics found in Pescaliat.

Azrael serves as the leader of the Handgun, his partner Verona de Noves handles the public relations and alliances with other organizations.

There are various roles and responsibilites thieves can take in the Handgun:

The Red Hand, the precursor organization for the Handgun, was founded sometime in the 4th Cycle's second century in the town of Oftin by an enterprising dark elf named Quillathe. As the soldiers of Gameth waged a brutal war of extermination against the dragonborn of the Nestorian Mtns., Quillathe saw an opportunity to raid the ruined mountain cities for their ancient relics. These items were fenced and smuggled across the continent, cementing the Red Hand's reputation as a reliable supplier of magic items in the world.

As the centuries dragged on with violent wars and revolutions, the Red Hand prospered by maintaining a fiercely apolitical stance. The Red Hand always sold to the highest bidder, washing their hands clean of any atrocities committed by their buyers. Quillathe retired in the 600's and appointed her son Azrael as the new leader of the group, a young man perfectly content with maintaining the Red Hand's apolitical tradition. That is, until he met Verona.

Starting out as a small-time crook on the streets of Garavecchio, Verona de Noves quickly rose up the ranks of the Red Hand to become one of its most valuable agents. From sacred blades to horns of valhalla, she orchestrated some of the organization's greatest heists and quickly caught the attention of Azrael. The two formed a close relationship, Verona's knack for diplomacy and subterfuge complementing Azrael's devotion to the Red Hand's respect for the art of the steal.   When Azrael spent several years adventuring with his close friend Roland Fireheart fighting liches from the Court of the Undying in the mid-800's, he allowed Verona to take charge of the organization in his absence. While only in power for a few years, she took a more partisan approach to managing the Red Hand and chose to favor some clients over others. She organized more heists against the nobility of Sardivelia and sold more often to oppressed groups like the dark elves of Rakka's Verschow, believing that the Red Hand had a responsibility to do more than just ensure the highest profit margins from its sales.   Azrael returned from his adventures believing that the Red Hand should play a more involved role in the world, supplying magic items to groups and adventurers capable of defeating the undead forces and aberrations that threatened to terrorize the world. Verona and him both agreed that the Red Hand needed a change in strategy, but their ideologies split over which causes the group should champion. The breaking point came in the 870's when Verona allied herself with Fairouz the Undying, Verona believing that the lich's powers could be used to overthrow tyrannical regimes like the anti-magic dictatorship of Gen. Boua Ussaki in Avicenna. Azrael's years of fighting undead convinced him that Fairouz was just another oppressor by a different name, leading to a schism in the thieves guild that split the group apart for several years.   Forces loyal to Azrael established the Handgun, upholding his belief in using the guild's magic items to defend against monstrous creatures and thievery for thieves' sake. Verona moved to the mining town of Ravi and founded the Three Fingers, a group of rogues and assassins seeking to overthrow oppressive dictatorships. Verona allied her Three Fingers with Fairouz's network of cultists known as the Coven, the dark elf believing it to be a means to an end in the liberation of man-made tyranny. A shadow war was fought between the two factions during the Avicennan War of the 870's, a bitter conflict that ended with the collapse of the Three Fingers and Verona's capture by Avicennan forces. Azrael tasked an elite group of adventurers known as the Royal Knights Brigade to rescue her from her prison in Kanara, and after such a chastening experience she agreed to work for the Handgun under Azrael's terms.

Running the Jewels   In the years following the Fairouz Terror the Handgun continued its rise as the preeminent thieves guild in Pescaliat. Magic relics were still fenced and sold to wealthy buyers, but with Verona's political skills alliances were made with groups like The Shroud and Royal Knights Brigade to reserve some items for use in the fight against monstrous beings. Handgun thieves have started to set up operations in Southern Pescat and the Northern Territories, stealing precious elven relics from kingdoms like the Elflands Empire and Kiri Clan.   The New Year's Massacre of 897 and the Sunken God's Reign of Terror was a global tragedy and devastating for the world's elven population, but the cataclysmic destruction proved to be an opportunity for the Handgun to seize four millennia's worth of valuable artifacts left abandoned in the Elflands capital of Kassædeia. Following the collapse of the Elflands Empire the Handgun became the largest private holder of magic items in Pescaliat, making anything rarer than a Broom of Flying prohibitively expensive for all but the wealthiest buyers. The Handgun has entered a new age of reach and prosperity, but tensions still remain over the group's mission and the responsibilities associated with possessing so many magic items. Handgun agents operate out of nearly every region in Pescaliat, the largest holdout being the kingdoms of the Campanel Desert like Sabha and Despero. 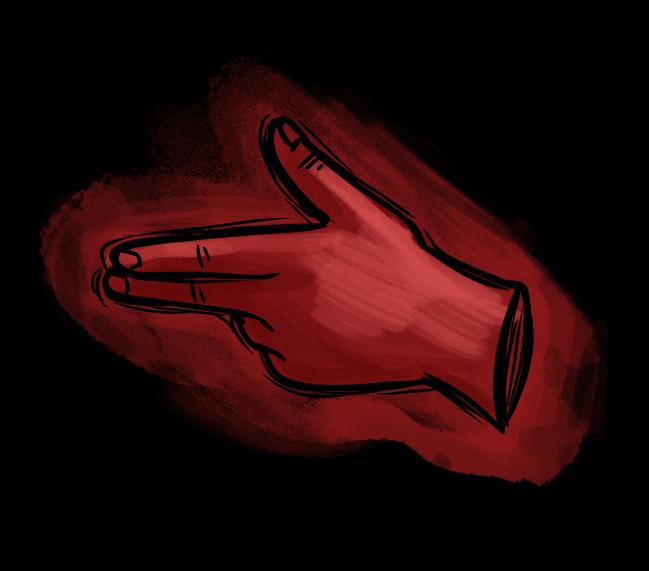 I'd Lend a Hand, But They're Stuck in the Fist and Gun Position