Founded by Medraad Le Fey in 875, this shadowy organization is committed to tracking, infiltrating, and eliminating evil cults and covens all over Pescaliat.

There are two different paths for aspiring Shroud agents to take in their anti-occult careers: international and internal.    The International path is the one that outsiders are most likely to imagine when they think of Shroud agents.  The Internal path typically refers to agents operating out of Shroud HQ in Kanara:

As an extra form of income, The Shroud sells its intelligence-gathering services to world governments. The access granted by these governments allows The Shroud to hear rumors of factions and cults among the highest echelons of power.

In 875, Medraad Le Fey used his downtime from adventuring with the Royal Knights Brigade to wander the city streets of Gameria. In the city's lower levels he came across a starving man by the name of Asmodeus. Sensing magic and potential in him, Medraad offered Asmodeus power, intelligence, and the promise of a stable job. When Asmodeus accepted, Medraad summoned The Man in Black under a shroud of Darkness as the three of them shared a cigarette. The Shroud was created.

Over the next few months The Shroud swelled in followers as Medraad invested all of his adventuring money into the organization. Medraad recruited from the lower ranks of society, highly qualified and capable people caught in hard times or devastated by the cruel whims of fate. Less than half a year after its founding, The Shroud had over three dozen members prowling the streets of Gameth.   Medraad's death during the Battle of Faouzia in 876 threatened to dismantle The Shroud, but The Man in Black and Asmodeus ensured its survival for the next decade and half. The Man in Black blessed The Shroud's elite agents with his eldritch powers and abilities, while Asmodeus worked relentlessly to keep the group afloat financially. There are rumors that he didn't sleep for three months straight in 877, but Asmodeus managed to enter into a lucrative intelligence-gathering contract with the kingdom of Gameth in 878 that ensured the group's survival for years to come.   In the 880's The Shroud expanded its influence beyond Gameria, purchasing a headquarters in the war-torn Avicennan capital of Kanara and recruiting agents in all over the world. By 888, The Shroud had an agent operating in every nation on both continents, a formidable intelligence operation contracted by many of the world's wealthiest and most influential figures.

The Man in Black spent nearly 15 years finding a way to bring Medraad Le Fey back from the dead, but it still came as a surprise when Medraad appeared out of nowhere in the middle of Shroud HQ in the fall of 890. Both Medraad and The Man in Black were reticent about how his revival occurred, but Asmodeus was relieved to retire and allow his old boss to resume control of the organization. Asmodeus died of exhaustion two weeks later.

In the 890's Medraad focused The Shroud's resources on a single organization quickly gaining followers in the Elflands Empire: the Cult of the Sunken God. Ever since the world's lone Kraken was killed in 875, cults had appeared that worshiped monstrous deities from the Far Realms and sent sahuagin into bloodthirsty frenzies. The Cult of the Sunken God was directly connected to several sahuagin attacks in the Elflands and Glace, so fearing the worst Medraad traveled directly to the Elflands capital of Kassadeia in 896 to warn the Royal Knights Brigade of this rising force and the threat it posed.   The warnings went unheeded, and after the New Year's Massacre of 897 destroyed the Elflands Empire The Sunken God had a foothold in the Material Plane (in the form of an undead Amara Fireheart) and an army of sahuagin to do its bidding. Frustrated by the Royal Knights Brigade's inability to stop this massacre, Medraad decided that The Shroud needed to be more involved in the Sunken God's elimination and tasked special agent Beleren Hazid to infiltrate the Royal Knights Brigade and defeat the Sunken God once and for all. For years Beleren had been working as a double agent within Gameth's secret service, so he was the perfect candidate to join a newly-reformed RKB after the events of the New Year's Massacre. Beleren's work for the Shroud proved to be a rousing success, Gameth's leadership never once noticing his Shroud connections and allowing him to operate and gather intel with complete autonomy.    The defeat of the Sunken God at the Battle of Kassadeia proved to be a rousing success for the agents who put their lives on the line for the cause, but the organization wasn't able to rest on its laurels. A few years later fiends from the Nine Hells tried to instigate a civil war in the tiefling kingdom of Rakka to collect souls from both sides of the conflict, leading to the death of special agent Alara as Rakka's Heroes sought to defeat the fiendish conspirators. It was a chastening experience for the Shroud, convincing them that no matter their success with one operation there would be half a dozen cults waiting to sow chaos in the mission's aftermath.    In the 4th Cycle's tenth century the Shroud started focusing on longer-term goals, gathering information on all the planes of existence and cataloguing the magic items collected from cults and interplanar threats alike. Forging alliances with academic organizations like Chusei University in the Northern Territories, the Shroud's researchers became the formost experts on interplanar activity and how to best deal with these interdimensional threats. It would be hard to determine the next great threat to life on Ekal, but the Shroud would have an upper hand with its decades of spycraft and intelligence.

Leaders of The Shroud

The Man in Black

The Man in Black is a mysterious deity from the Far Realms who granted The Shroud's founder Medraad with eldritch powers to eliminate cults and covens all over the world. Sometimes referred to as Nyarlathotep, The Man in Black grew disgusted with the chaotic nature of other gods from the Far Realms and their blatant disregard for mortal life and order. He took an interest in the affairs of mortals on the Material Plane, which perhaps explains why he frequently communicates with The Shroud's leadership and its highest-level agents. He went to great lengths to bring Medraad back from the dead, but he refuses to describe the deal he struck to accomplish it.

Calling The Man in Black

Members of the Shroud communicate with their patron and each other using specially designed cigars. When lit, the cigars cast a combination of the spells Darkness and Telepathy to allow the Shroud agent to communicate with any member anywhere in Ekal. The shroud of darkness allows agents to speak freely without the threat of prying eyes or listening ears. Each cigar is single-use, so Shroud agents typically carry a box of two dozen at any given time.

Elite agents of The Shroud are sometimes allowed to enter into a pact with The Man in Black known as the Pact of the Great Old One. This arrangement allows the agents to cast powerful spells to enchant and contain cultists on high-risk missions and communicate with The Man in Black whenever they want. 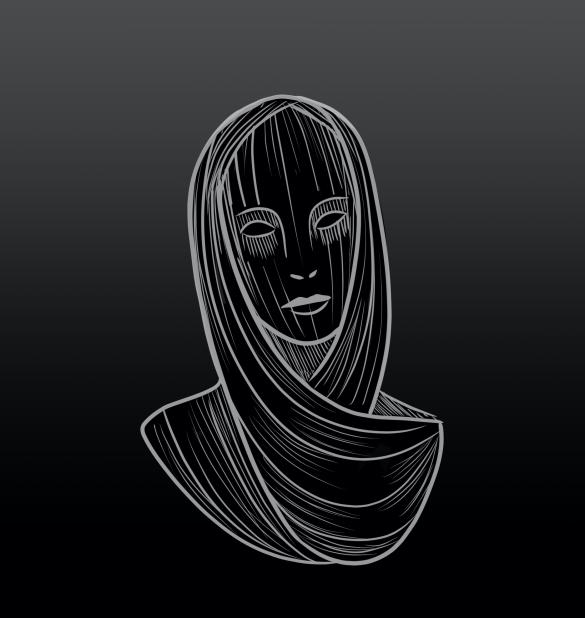