A human barbarian and member of the Royal Knights Brigade. Corrupted by the Sunken God, she died in a battle with a death slaad in Hedgpeth before being transformed into the Sunken God's avatar of destruction and chaos. She was finally laid to rest by the RKB at the Battle of Kassadeia in the winter of 897.

The daughter of the famed adventurer and nobleman Roland Fireheart, Amara always had high expectations to live up to. Her rebellious streak showed early, running away from home and embarrassing her father at every opportunity. She was inspired by stories from her mother Cpt. Theron to go out to sea one day, and as soon as she was old enough she fled to Myltev to start a life as a pirate. The move caused quite a stir in Gamerian high society, and Roland nearly resigned from the royal council out of shame. Amara made a reputation for herself as a ruthless fighter during naval boardings, but a falling out with Cpt. Tarkov's right-hand man left Amara marooned on a nameless island. Her loyalty to Seevo led to her eventual return to Gameria, but Roland would not take her piracy sitting down.   Amara was forced into the Royal Knights Brigade to set her straight, but that plan went horribly off the rails. Queen Astrid gave the party considerable leeway when she allowed them to join the Characters Revolution in the Elflands and gather intelligence on their motives, but Amara took the opportunity to investigate rumors of a mysterious deity known as the Sunken God. She obtained a powerful weapon and forged a deep bond with the monstrous deity, and despite some reservations about the physical transformations she agreed to assist the Sunken God in his plots to destabilize the Elflands Empire.   During the Battle of Hedgpeth in 896 she was forced to prove her loyalty by killing Princess Isabel, an Elflands royal family member possessed by a slaad working for the Sunken God. Amara delivered devastating attacks against the slaad monster, but she was killed in the end by a wave of noxious gas. Adam, devastated by the young woman’s death, had her body embalmed and began moving it back to Gameria.   Later in Kassadeia, The Mariner would work under the Sunken God’s guidance to have Amara’s body resurrected in a wight form known as Burns Jones. This reanimated Amara fought during the New Year’s Massacre of 897 to savagely murder Empress Ophelia Avon, shocking everybody in the party. Jax managed to toss her from the tower during their fight with The Mariner, but despite plunging hundreds of feet she managed to survive. Burns Jones raged on with new sahuagin legs to replace the ones broken by the massive fall, and for months the undead Amara served as the vessel of the Sunken God during the monstrous deity's reign of terror.   It wasn't until the Battle of Kassadeia in the winter of 897 that Amara's body was finally put to rest by Flora and the other members of the Royal Knights Brigade. A spectral version of Amara appeared to the party apologizing for all the destruction she'd caused, and once she was forgiven by Flora the spirit disappeared into the afterlife. Her father died of a broken heart a few years later, and her mother named an orphanage in Gameria in her honor. 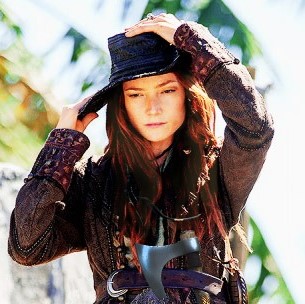