A female kalashtar and member of the Gilded Hecat Guild. Raised by lighthouse-keepers on the coasts of Avicenna, Windred had long been fascinated by the stars and their celestial mysteries. Called forth by strange signs and visions, she traveled west towards Bahamut to join the GHG and befriended the bugbear pirate Argus along the way.   Windred is insatiably curious, forever pursuing knowledge in all shapes and forms. She has a particular interest in the Gith, inspired by her githyanki traveling companion and necromancer Zan'kiri. Windred adores coffee, her family of lighthouse keepers, potion-making, and books, but loathes chaotic yuan-ti bards, overly ambitious and offensive tiefling inventors, and not knowing what you’re thinking.   Within the past few weeks of 918, after a (somewhat?) successful mission in the aqueducts of the Treeleaf Union, Craghan’s threats have escalated to a new level of violence, egged on by Windred’s Shroud dissertation topic and traveling companion, Zan’kiri. Windred continues to travel with Zan’kiri, Bubbles, Ysmyrelda Starr, Reetma and Beguiler in the hopes that one day, they will help her defeat Craghan and his creepy messages. In return, she has committed to helping them each with their own paths. She mourns for her very first friend in the GHG, the randy bugbear pirate Argus.

It’s a strange sight to see so much ink on a young person; tattoos of dark stars and the silhouettes of crescent moons cover the arms, chest, and even the face of young kalashtar and Shroud agent, Windred Ozlow. When she sends out radiant beams of energy, the tattoos light up with a white-blue brilliance, a love letter to the night sky she draws her magic from.

However, it’s hard to ignore the ugly scrawlings that mar Windred’s carefully curated collection of ink- in addition to the stars and moons, a mad Githzerai named Craghan Navierre has added his own cruel love letter, with possessive tattooed threats that demand Windred to allow him to sever her from her Quori spirit, Cheyeashtai. Tough luck, Craghan. You’ll have to pry her from Windred’s cold, dead body.

Like many kalashtar in the 4th Cycle's tenth century, Windred found safety in The Shroud from a young age. To many the kalashtar were seen as aberrations to be feared and shunned, but at Shroud HQ in Avicenna they found a welcoming community and a place to test their telepathic powers to their full potential. Windred's parents were some of the Shroud's earliest recruits in Lyman, her mother Nerissa being the first kalashtar in the family before passing the quori bond onto her daughter. Ever seeking knowledge and insight about what lay beyond Ekal's borders, Windred soon abandoned her small fishing village to pore through the vast tomes of Gameria's National Archives.   It was here that, for better and for worse, Windred had fateful encounters with two men that would change the course of her life: Craghan Navierre and Argus. The githzerai Craghan cursed her with some magic enchantment that allowed him to send her messages via tattoos on her body. The first few tattoos were vague, one-word directives to join the GHG in Dhrylonis, orders she decided to heed to learn what Craghan had planned. While in town she also ran into Argus, a weathered old pirate also searching for knowledge in Dhyrlonis (but of a more draconic variety).

Together they chartered a boat for Southern Pescat, but it wasn't until they arrived in the region that Craghan's true motives to revealed themselves. Through some twisted logic he believed that Windred's quori Cheyeashtai was a parasite, convinced that it was his duty to save her from the otherworldly being. The tattoos became more and more deranged, sometimes turning painful when Zan'kiri would try communicating with him via tattoo.

During the Fortunate Five's adventures through the Treeleaf Union Windred grew in power and learned new tricks to combat this terrifying gith, but even after weeks of adventuring the messages grew more threatening and specific. Craghan was planning something, something that Windred intended to stop at all costs. 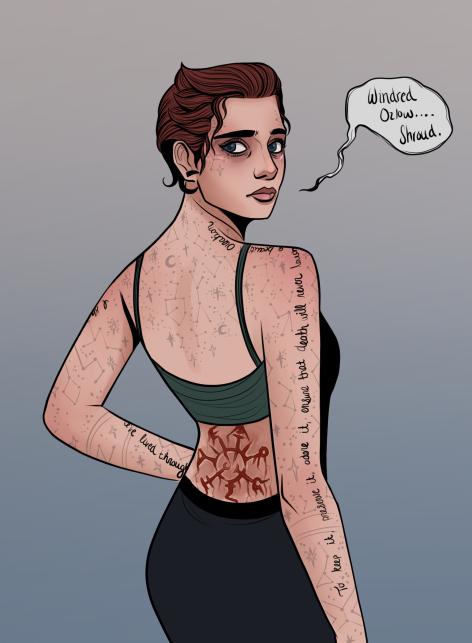