A male bugbear and member of the Gilded Hecat Guild. In a past life he was a Myltevian pirate during Cpt. Tarkov's reign, racking up a 2,000GP bounty after dozens of successful raids against Sardivelian shipping vessels. Piracy became less profitable as the new King Nikolaj Baratov cracked down on the pirate bands of the Karaga Sea, leading Argus to a late-in-life career change as an adventurer-for-hire in Bahamut.

Raised by a powerful bugbear matriarch in the Elflands colony of Hedgpeth, Argus set out of for sea at an early age and ventured with the Heavy Metal Pirates for decades. On his journeys he racked up several wild encounters and raids, a constant thorn in the side of Paoli's Sardivelia. But as the decades wore on and new nations rose to power, the Heavy Metal's influence diminished to the point where Argus' bounty was only worth 25GP in the year 918. A paltry bounty, barely worth a month in one of Paoli's labor camps. 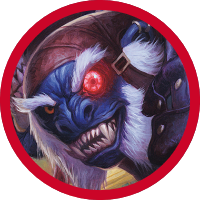