A female tiefling and undead specialist. A graduate from Scherazad Academy in Rakka, she originally majored in battle tactics until a chance encounter with Rakka's Heroes in the fall of 900 completely changed the course of her life. Helping the adventurers stock up on weapons and ball-bearings, they regaled her with stories about epic battles with ghosts alongside valiant kenkus out on the open sea. They inspired her to start studying the supernatural, spending the next five years learning all she could about Ekal's undead.   After graduation she spent several years apprenticing under Lothar Hainaut in the Verschow before she obtained her dream job: studying the elven spirits haunting the ruins of Kassædeia. Under close supervision by the Elflands government, she developed an effective method to catalogue the thousands of spirits and implemented rituals to keep them pacified. Her work ended in scandal, and she was forced to leave the Elflands in 915. She traveled through Sardivelia and the Treeleaf Union in the years following, setting up shop in the swampy city of Ardin to study the ghosts terrorizing the halflings there.    As a favor to Rakka's Hero veteran Kirby she agreed to help a group of adventurers known as the Fortunate Five from his guild. She offered to cast a 'Heroes Feast' for the party before a major fight against Bianca Avon's ghosts, but relations rapidly deteriorated between her and the FF to the point where Zan'kiri, Windred Ozlow, and Ysmyrelda Starr organized her murder in the Imperial Marshes later that year.    Bianca Avon's lair ended up being a resting place for the archdemon Gray Hat, who used Jezebeth's body as a vessel for his chaotic machinations. Together with a Gray Hat-possessed Argus the two of them traveled throughout Pescat to assemble a group of acolytes large enough to bring Gray Hat to Ekal in all his chaotic glory. The FF ran into her and Argus in a Desperan chateau near the Temeraire Mtns as they sought to put an end to a longtime foe, severing Jezebeth's soul from Gray Hat's demonic corruption thanks to a spear provided to them by a half-elf courier.    A longtime admirer of the adventuring lifestyle, her career was inspired by a team of adventurers and eventually terminated by a different group of adventurers. 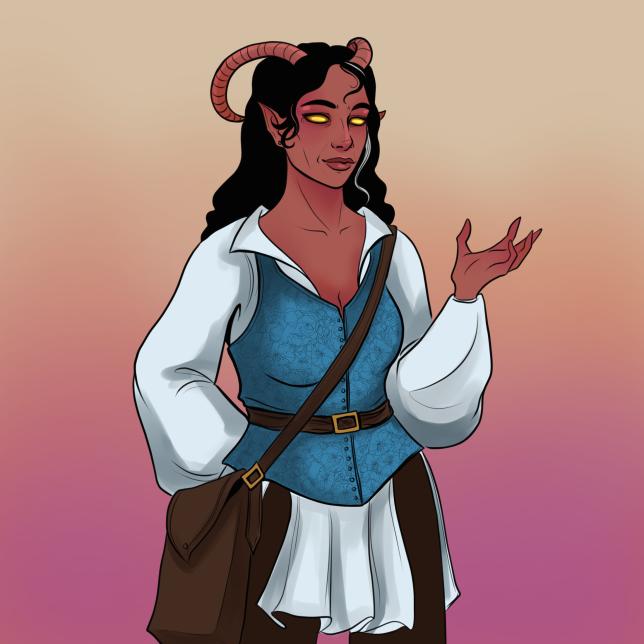