Look around us, General. You trained us yourself. With thanks to you, this is the most competent and deadly group of men on this plane of existence and maybe any other.

But my friend, my oldest friend... no man can wage war on a storm. If we remain, what comes is not the enemy. It is our end.

I love you and I will stand at your side no matter the cost, but I have seen what we await. With my eyes and in my dreams. We will not succeed. We will not even survive.

I beg you--stop this folly.

The Void Song is an ill-understood creature of legend in Acaelica. Similar to the Tarrasque, it seems to exist as an unstoppable force of wanton destruction with no agenda or plan beyond consumption and chaos in the extreme.

Its origins, motivations and intentions are unknown and likely unknowable--it is less a life form than a force of nature. Although it has been ostensibly defeated on more than one occasion, within six years of its apparent death, it (or another identical duplicate) appears randomly to once more terrorize and annihilate anyone with whom it comes into contact.

The only recommendable course of action in its presence is to flee.

Much of what is known of the Void Song--little though that amounts to--is gathered from numerous, detailed accounts of its appearance, its fury, and its ultimate "defeat" by many different cultures across wide expanses of time.

The gaps between these periods can sometimes be fairly disputed as being within six years of one another (suffering the unreliability of Wild Reckoning notation) but there are much wider gaps in the records to be found as well. While some hypothesize that the "six year return" is a mistake or a myth, others suggest a darker possibility: That simply no one survived The Void Song's onslaught during these periods.

The most complete and useful record of the Void Song in existence came from studying the abandoned libraries of Nuross--the one-time stronghold of the Vedalken empire that visited Acaelica en masse before leaving as quickly as it arrived some time before The Spellplague.

As Ozcymath and his horde appeared unexpected, unprovoked and in the blink of an eye on Acaesura, the damage they were able to cause was profound and indescribable. None were prepared for the war that was brought (quite literally) overnight to their doorstep and countless lives were lost in just the first few evenings of the onslaught.

It was evident that Acaesura was lost from the beginning and all that was left to do was buy time for Acaelica--at least in the hope of amassing a better defense for the greater continent.

It was Inibis Valmeia who suggested releasing the Void Song from its arcane prison deep within the bowels of Nuross' fabled inverted tower. The creature (if it can be so called) had been caged there for centuries, but whatever technology the Vedalken had used to imprison it was lost to Acaelica since the race vanished entirely from the Prime Material Plane. This in turn meant that, were the demons or modern Acaelicans able to defeat the Void Song, the cycle of its inevitable return would likely recommence without possible recourse.

However, being a time of utterly dire desperation--and with the understanding that all might be lost to the demons if nothing could be done--both Palasar Tolthik and Taslyn Cordaer agreed to the plan and it was put into action.

Zauroth Bonecarver Aku-Vegali was placed in charge of defending what remained of Nuross while the group of Fan-Garm the warlock, Pickles the barbarian, Quafiz the wizard, Teoz the fighter, Waywocket the bard and Zherrius the cleric infiltrated the tower. There, they released the Void Song from its bonds and led it out into Acaesura.

From there, the creature was simply loosed upon an unsuspecting demon army, which it swiftly decimated. Unaware of what they faced, the demons were met with almost the same level of destruction they had visited upon Acaesura itself.

Although Ozcymath and his most powerful allies were able to defeat the creature, it took precious time and undivided attention to do so. During these weeks, the forces of Acaelica were able to plan and assemble a counter-attack on the ruined subcontinent, resulting ultimately in the total destruction of both the landmass and the invading horde under the combined powers of Inibis, Palasar, and Taslyn.

It has been more than six years since the demons subdued the Void Song, but strangely, the creature has not been seen again. Some believe it was truly defeated and will never return, others bide their time and await the worst. Others still are actively seeking it out.

Although the Vedalken language remains largely untranslateable, enough has been reverse-engineered to paint a picture of the Void Song's history on this continent and even to understand something of its nature.

The mortal experience of the Void Song, however, is best described by the records kept by Quafiz, who detailed his story eloquently in notes kept during and following his interactions with the creature. Though Quafiz himself--like the rest of his fellow, heroic adventurers--has not been seen or heard from since The Demon War, his notes on the subject have been widely published and disseminated.

The Void Song is an enormous, colorless mass that most closely resembles a storm cloud without definite outline. It constantly shifts and reconfigures its shape (occasionally resolving parts of itself into something resembling claws or teeth) and can apparently increase or decrease its size at will. Moreover, it can split itself apart an arbitrary number of times, with individual aspects acting apparently independent of one another. Sometimes these aspects reassimilate themselves into a larger whole, which may be the original or a secondary form entirely.

Each of these aspects emits a sound that deafens anyone nearby. It will evidently rupture the ear drums of anyone who spends too long in its vicinity. The sound has been described as "a simultaneous hum and whistle, oscillating pitch at a rate too rapid to follow and utterly maddening to behold."

Both the "prime" creature and its subsequent offshoots can cause enormous pain by simply coming into contact with another lifeform, which each will repeatedly do with apparent purpose and malice. More dangerously, however, they can enter that lifeform and take total control of it for a period of time, causing the lifeform to lash out violently against anyone around it.

Although the length of time the Void Song can "possess" an individual is in fact undetermined, the possession itself drains the life out of the afflicted and few have survived for longer than half an hour during such events.

No banishment or transportation magic seems to affect the Void Song whatsoever. It simply ignores these spells and continues its rampage unaware of (or unconcerned with) their casting. 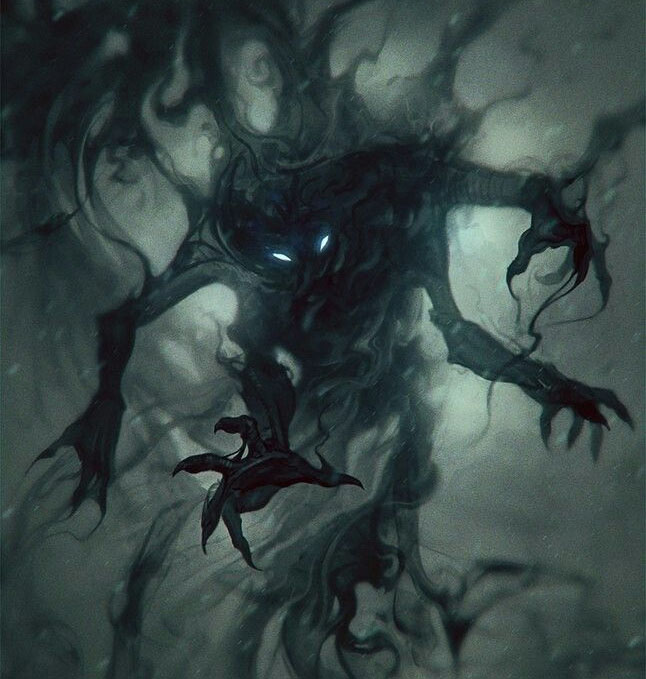 Back to Top
Monsters & Enemies