The Book of Leaves

The Book of Leaves is a cryptic and apparently indestructible tome of ancient fey origin. No larger than a notebook and bound in living wood, it is purported to be a catalog of infinite and forgotten legends. The Party first learned of its existence from Sinfarena, who resented that the jealous Autumn Queen had locked it away in a private vault.

Sinfarena agreed to help break the party's curses if they first liberated the Book of Leaves from its "prison." Although she claimed to have read and loved the book, her goal was not to read it again. Instead, she expressed a desire to have the book be made available to those who could appreciate it. It is also possible that she was trying to spite the Autumn Queen, whom the party would learn was largely responsible for Sin's confinement to The House Without.

The party succeeded in their task (with some help from Anselenicus the boggle) and returned to Sinfarena with the book in hand. She reaffirmed that she did not want to keep the text, adding that doing so "was no better than keeping it in a private vault." After transacting individual exchanges with each member of the party and breaking their curses, she told them to do with the artifact as they pleased.

Sin further expressed that she thought Lady Mallory would adore the book, though she thought it would be wasted on her.

When the party first opened the book, it was devoid of any content whatsoever. They had time enough to consider that the many empty pages were not apparently paper but instead had the texture of living leaves (if far sturdier). Howevever, it was not long before writing began to appear, and it showed up on every page simultaneously.

Although the writing was neat and legible, it left no margin whatsoever on the pages--as though every inch of surface was indispensible. In moments it would seem that the only space to be found in the book existed between the words written within.

As words continued to scrawl themselves out, they appeared suddenly and completely as though they were escaping from within the pages. Words appeared whole, and not letter by letter. During this deluge, the party had time to glimpse a number of passages depicting the following:

However, as a given page became filled with writing, more words yet began to pen themselves in layer over layer upon the text already present. In moments, every page in the book was an illegible mess of scribbles. Shortly beyond that, ink consumed every inch of free space within, leaving behind no decipherable text whatsoever.

This cascade of writing would leave the impression of leaves appreciably changing color on a tree, settling ultimately into a dead, light brown.

Each member of the party experienced individually a moment of the Book "wanting" them to attune to it. It was, put simply, as though the book wanted them to want it.

The sensation seemed to take the form of a request. Each of Grihymm, Faewynn, Vornaar, Johann and Algernon rejected the invitation, but Murmus accepted and immediately became attuned to the artifact.

Suffering no ill effects (but finding an immediate fondness for what he now considered a treasure), Murmus collected the book from his friend and continued about his other business after. He did this secure in the knowledge that he had changed somehow... but perhaps only for the better, as he had made a new friend.

After the attunement, the book remained empty for only a moment before two additional pieces of writing appeared. The first showed up on the inner front cover of the book itself, as though it were a kind of foreword to the contents.

The second piece of writing appeared on the first page, maintaining the same lack of margins as all previous writing had demonstrated. This one, while still cryptic, seemed to directly address the party themselves.

Foreword: These Ashes of My Making
I stand before these ashes of my making
among those who watched my hands betray them.
How cruel to finally understand
these steps I couldn't stop taking and
the strings being pulled across time.
So to the friends I leave behind:
May condemning me grant the amnesty
I will doubtless be denied.

How unfortunate to stand mere feet away from three who could have led you back to your lost memories and not to realize them for what they were. Miles and obstacles between you now and getting further as we speak.

You may yet catch up with them in Kor Ellin, I suppose. If indeed that is what they are still calling it these days. A shame about those collars... Mallory is right not to underestimate you, but her lack of imagination is infuriating. No small wonder to see what three undead librarians can do to a town of simpletons given time. 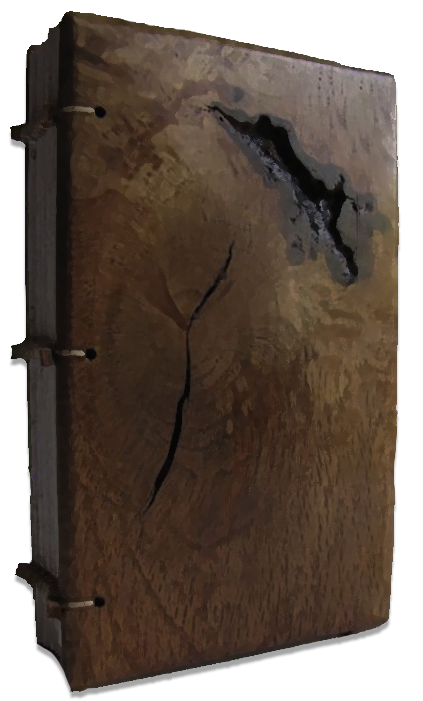