played by A. Hanes

Algernon's two loves are readily apparent: magic and ale. It is not clear which he prefers. His Mage Hand has proven as much a member of The Party as anyone more corporeal, notably offering the paralysis poison for Roach to drink during their encounter in the depths of The Primeval Archive.

In exchange for having the final bonds of The Curse of Crossbones lifted, Algernon promised to Sinfarena a single spell. Immediately following his acceptance of the trade, he felt as though he had just cast a third level spell. That evening he would rest, before awakening the following day to find nothing out of the ordinary. He was fully recovered and no worse for wear, all things considered -- especially as compared to his friend Grihymm, whose surrendered "blessing" had rendered him unable to feel the warmth of the sun.

Some time later, Algernon would join the party on their trip to Kor Ellin to investigate the disappearance of Lorna's mother, Mathilde. After finding a town full of mystery and confusion, the group would ultimately pinpoint the source of the troubles as the Three Undead Librarians whom they had inadvertently freed from The Primeval Archive during their time in The Fellgleam.

Though the party never discovered the true intentions of the librarians, they were able to defeat them in combat -- ending the charm spells the drow had inflicted on so many citizens of Kor Ellin (Mathilde included). As the town gathered together afterward to learn of the party's victory, an impromptu party was thrown in the house of Mayor Zakarias Orlane. People packed in as tightly as they could, everyone wanting to at least shake the hands or even meet the gaze of their saviors.

A table was flipped upside down to create a makeshift stage for the party to stand up and give a speech. While looking out at the small sea of people cheering their names and applauding, a familiar face appeared amongst them. Sinfarena, smiling, offered a simple phrase: "Murmus and Algernon; a friend... and a spell."

Algernon found his hand lifting in front of him, beyond any control or desire of his own. Contained already within it were the material components for Fireball, which he proceeded to cast on the room of party-goers, ending all of their lives in an instant.

Is a mouth an entryway?

It's not long after we meet them, anyway.

Algernon on the lifespan of a Grung

We can just find a group of bandits, kill all but two of them... and then kill the other two.

Algernon on trading a "life for a life"

Facing the challenge of several days travel through The Fellgleam, The Party realized they'd need some way of protecting themselves at night. A recently empowered Algernon announced that he had mastered a spell called Leomund's Tiny Hut, which he claimed would last up to eight hours. However, remembering that nights were 10-12 hours long at this time of year, Algernon realized he could cast the spell a second time from within the safety of its first casting, as long as this new hut was ever-so-slightly smaller than the previous one.

Punctuating Algernon's self-satisfaction was a sense that some distant god of fate had just thrown his arms up in exasperation. It was as though some ineffable plans for the party's immediate future were, in a moment, shattered with utter disregard for the god's wasted efforts.

It's Real Gold (for the next hour)

In his first meeting with King Cyrus--ostensibly serving as a bodyguard to Johann VonGruppen--Algernon conjured a chunk of gold with which to pay the sovereign for some Threads of the Old Weave. This appeased Cyrus and earned the group an invitation back when they had "the rest of their gold." This, Cyrus said, they could trade for the more powerful items that he claimed to possess. Sadly, the gold would not last longer than an hour, and Cyrus's discovery of the trick resulted in some violent pursuit of The Party.

Since he comes from the ranks of the common folk, Algernon fits in among them with ease. He can find a place to hide, rest, or recuperate among other commoners (unless he has shown himself to be a danger to them). They will shield him from the law or anyone else searching for him, though they will not risk their lives for him. 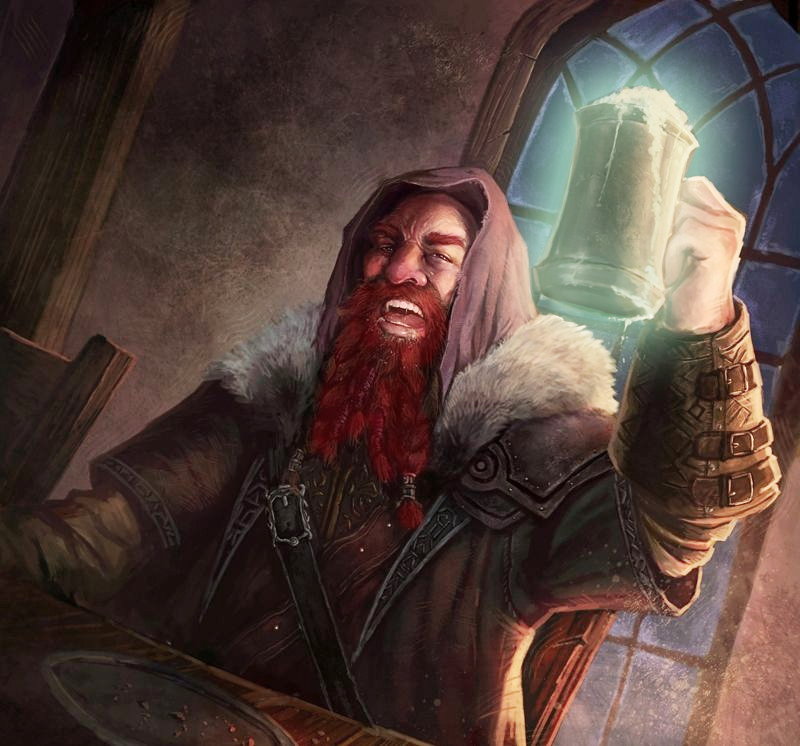