I could perhaps bring her back. Though by the look of her... I do not think she would thank me for it.

Friend, on the prospect of reviving Lorna

"Friend" is an enigmatic individual currently living in Necine. He approached Johann VonGruppen following the bard's spectacular performance one evening at The Sober Dwarf inn.

He seems to have an impeccable memory for music and artwork -- as well as the talent to reproduce each. He demonstrated this for Johann by learning a song note for note after hearing Johann play it for him only once.

A Song for a Song

Among the songs that Johann played during his remarkable concert was the The Battle Hymn of Buhuhbluh. Johann had played it once before in Witchmill to a crowd who plainly did not recognize it, but this time it attracted the rapt attention of a peculiar elf.

The elf pressed Johann for where he had learned the song, but Johann was unable to answer truthfully (given his lost memory of much that preceded his waking up in Crossbones), and so he simply claimed that "he had just heard it around somewhere."

The elf insisted he did not believe him but promised to return the following morning with more to discuss on the matter. This would turn out to be evidence of the song's apparently ancient origins.

Friend had recognized the tune from an etching of sheet music retrieved from "a pre-Spellplague ruin" by an adventurer with whom this elf had had past dealings. Importantly, the etching simply indicated the closing bars of a song for which the elf apparently had no title. It was followed by the opening bars of another song simply titled "Funeral Hymn," which Johann also recognized as being from Buhuhbluh -- though he didn't know how he remembered that either. The name Buhuhbluh was itself novel to the elf, and was further evidence of Johann's impossibly esoteric knowledge.

When Johann asked his new acquaintance for his name, the elf was aghast that a Feytouched could be so casual with such a thing -- apparently recognizing Johann for what he was without it needing to be said. Beyond that, though, the strange man demurred, asking instead what Johann would like to call him. Pausing for a moment, Johann suggested "friend" and the elf delighted in that response. He has answered to it as though it were his name ever since.

Johann explained that the party was seeking Castian, whom Friend explained would assuredly be at the Perish Day festivities that evening in the Cauldron.

However, remembering that the reason to seek Castian was a distant hope of locating one able to revive Lorna and her mother Mathilde, Johann decided to see if his new, apparently well-informed friend might simply be able to help with that himself.

Friend did indeed claim to be capable of these magics, which he agreed to offer in exchange for Johann's story, as well as whatever light Johann could shed on the music of Buhuhbluh. Johann agreed, and Friend asked without any evident misgivings for Johann to lead him to "the deceased." However, upon seeing the burnt corpses of the two dwarves (removed undiminished from their time in Grihymm's Bag of Holding thanks to Murmus' Gentle Repose spell), Friend was disappointed to share that restoring their bodies was not within his power.

He did, however, know of someone who could help them: a woman called the Shaman of Lowtide. Unfortunately, this service was going to require the antler of a peryton as well as a somewhat darker component in the form of a "life of equal measure," informing the party that they would have to kill to revive their friends.

Already suspecting this "Friend" was more than he appeared, the party's suspicions were quickly confirmed when the elf insisted he could take them directly to some perytons. Killing their prey and retrieving its antlers was something they'd have to figure out for themselves, but actually locating these mythical creatures seemed to be a triviality to the elf. In fact, he shared, they could walk to their destination in less than ten minutes. From there, it was a simple step into The Feywild.

Given Friend's explanation of what they would be up against, the party spent the day sharing stories with Friend as Algernon the Tall prepared some important spells for their journey. Early that evening, they followed Friend to a fey crossing in one of Necine's numberless alleyways. As promised, it led them directly to their quarry (which proved a simple hunt for the adventurers polymorphed into giant apes who were magically gifted with flight).

Notably, however, the man called Friend was nowhere to be seen. Though one sharing his voice and demeanor did greet them in the fey, his visage was quite unlike the noble-looking elf with whom they had spent the day. 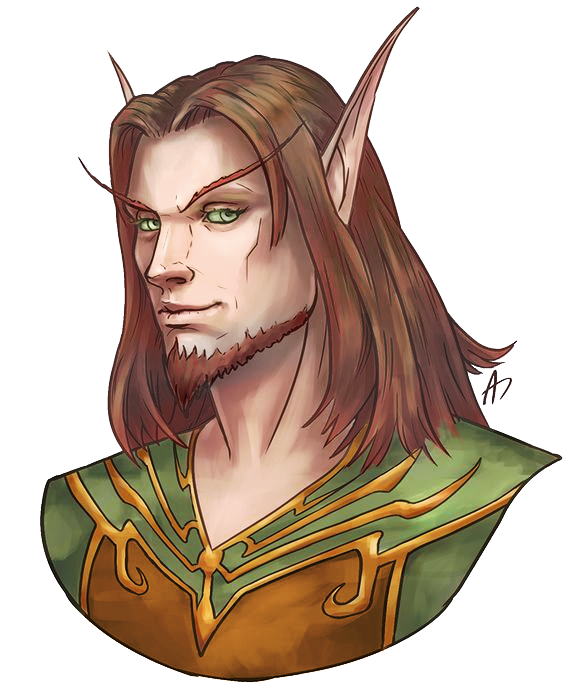