The Fire Sword is an ancient, legendary weapon. Many believe it may even be sentient, as it appears to be extremely strict in choosing its wielder.

Although stories of its magic appear several times in Acaelican history, these records are often separated by centuries. No pattern has yet been discerned regarding its appearances, but they very clearly depict the same weapon each time--right down to the seemingly incomprehensible babble that precedes its flames.

The sword was originally recovered from the edges of The Fellgleam by the druid Vornaar. In point of fact, what Vornaar effectively discovered was a fist-sized, metallic, perfectly smooth and mirrorlike cube which secretly contained the sword (or at least, a portal to it? It's unclear.)

Although Vornaar was quite certain the artifact was magical, he was unable to discern its hidden properties. Unwilling to sell it before discovering its purpose, it remained all-but-forgotten in his cottage's cellar before his chance meeting with the Party.

When Vornaar agreed to guide The Party to Witchmill, he remembered the odd cube and had them inspect it for him. Once Johann alone claimed to hear a distant music while holding the cube, Vornaar gifted the strange artifact to his new friend.

The mechanics of the cube are as yet poorly understood by the Party (and presumably, anyone who isn't an Elysian). However, its nature is detailed incomprehensibly within The Anvil Arcane as a "hypercube."

The discovery of this book would, in some indeterminate way, cause Johann VonGruppen to understand the riddle that unlocked the cube, revealing the legendary Fire Sword.

You can use a bonus action to speak at least one of this magic sword's command words, causing flames to erupt from the blade. These flames shed bright light in a 40-foot radius and dim light for an additional 40 feet. While the sword is ablaze, it deals an extra 1d6 fire damage to any target it hits. The flames last until you use a bonus action to speak the command word again or until you drop or sheathe the sword. This damage scales to 2d6 when the wielder reaches Level 6 and 3d6 then they reach Level 10.

If this sword is ablaze and is used to slay a silly human, it renders their matter across all dimensions. They cannot be revived by any means other than a Wish spell.

Once per day, the wielder can pantomime strumming this guitar and it will telepathically transmit the sickest of riffs into the mind of the wielder and any additional parties the wielder chooses and can see. This ability recharges at dawn.

Attacks made by this weapon are considered magical whether or not the sword is ablaze.

Proficiency with a longsword allows you to add your proficiency bonus to the attack roll for any attack you make with it.

The sword will respond to any of the following command words: 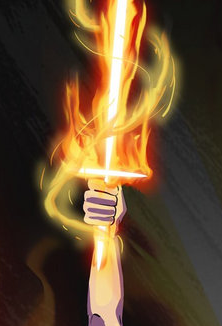