Twig is a particularly clever and resourceful quickling whom the party first met in The Fellgleam. He has been responsible both for plunging the party into danger and uncertainty as well as guiding them through and out of equally dangerous and uncertain situations. His true goals and alignments are unknown.

After their introductions, Twig requested that they "wait until nightfall" by his treehouse--a request which the party refused. However, they counter-offered to lead him back to Crossbones, and he accepted. Upon arriving, however, he and the goblins immediately turned invisible, managing thereafter to steal Odac's entire collection of Threads of the Old Weave.

In the first "mission" the party accepted from Crossbones' raid board, they found themselves investigating a strange "hole" in a hill nearby to Crossbones. Many had sworn that it only recently appeared there, and these types of things were usually indicative of magical or planar disturbances in the area. When the party investigated the cave, they found inside a wild bear, which was not happy to see them and attacked immediately. They had little difficulty dispatching the creature, but it was quickly clear that there was more to the story when Johann found some glowing, purple text carved into the wall, which simply read:

They killed the bear. Now what?

After navigating a bizarre journey back out of the cave (down a hallway which apparently required them to walk backwards), none paid any further mind to the strange events until they reunited with Twig in Lady Mallory's tower. Twig explained that they would have been able to enter the fey safely during the daytime if the party hadn't "killed his bear," and they instead had to wait for the pre-dawn to travel as safely as possible.

His residence is--or was-- a magnificently detailed dollhouse built into a tree in the Fellgleam. Johann VonGruppen attempted to burn it down, causing the party to be attacked by several dryads. The current state of the house is unknown, but Twig would later get his revenge on Johann by lighting his room in Lady Mallory's tower on fire while the bard slept.

The party was reunited with their old friend Twig when they decided to visit The Feywild in order to break their curse. As Gillath Naethyra once told Murmus Bigtoe: one should never visit the fey without a guide. The party was indeed surprised to find that their guide would be the one who had set them on the path to Lady Mallory in the first place, but they nonetheless had no choice but to accept his help.

It is unclear at this time for how long Twig has been working with Lady Mallory, to say nothing of the nature of that work. It is apparent, however, that Threads are involved.

Retrieving the Book of Leaves

Twig was instrumental to the party's successful mission in The Feywild. He managed not only to get them safely to the doorstep of The House Without--a task not easily accomplished if his extremely roundabout path was to be trusted--but also to the base of the Sunhallow tree. Once the party was inadvertently captured alongside Anselenicus the boggle, Twig hid in Murmus' beard until the party was locked in a prison cell within the tree. Murmus purposefully fell during their trip up the tree and nearly murdered Twig in the process. He may even have succeeded, if not for the quick-thinking of Grihymm Phrahdrandon.

Once Murmus' indicated the he somehow "remembered" the entire structure and layout of the tree, he called out the existence of a Teleportation Circle nearby to the private vault. Twig wasted no time in darting out of the cell and retrieving a scroll (as well as materials) to cast the pertinent spell, which the party used to escape the cell.

Twig then led the party out using the same circle after they had retrieved The Book of Leaves from the vault. This time, they arrived squarely at the top of Finders Keep, where they acquired some Gust Gliders from Ersatz the goblin artificer. These they used to fly back to Sinfarena to have their curse broken. 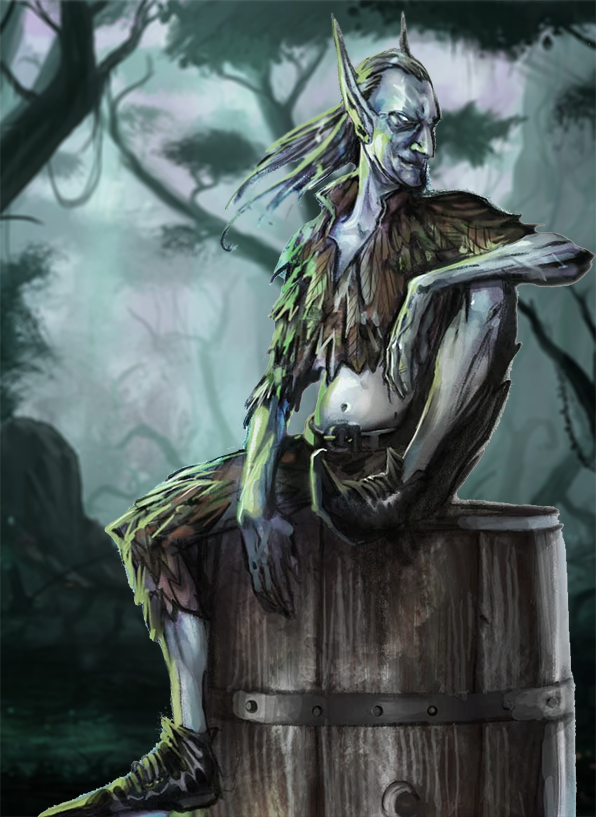